Prince George joined his parents The Duke and Duchess of Cambridge at Taronga Zoo this afternoon. 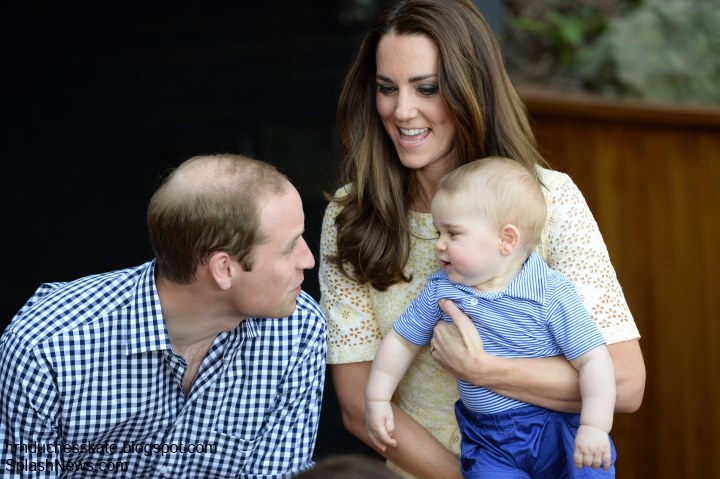 Reporters said Kate wiped drool from George's face as they walked in to the zoo. 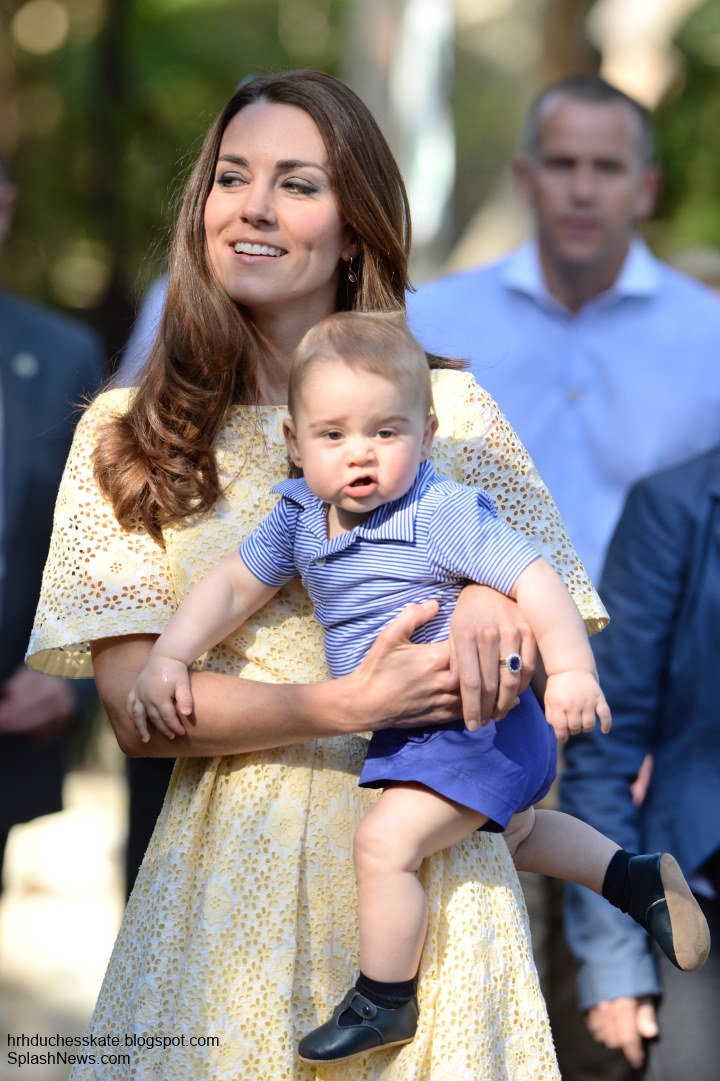 There was great excitement as the Cambridge family arrived. 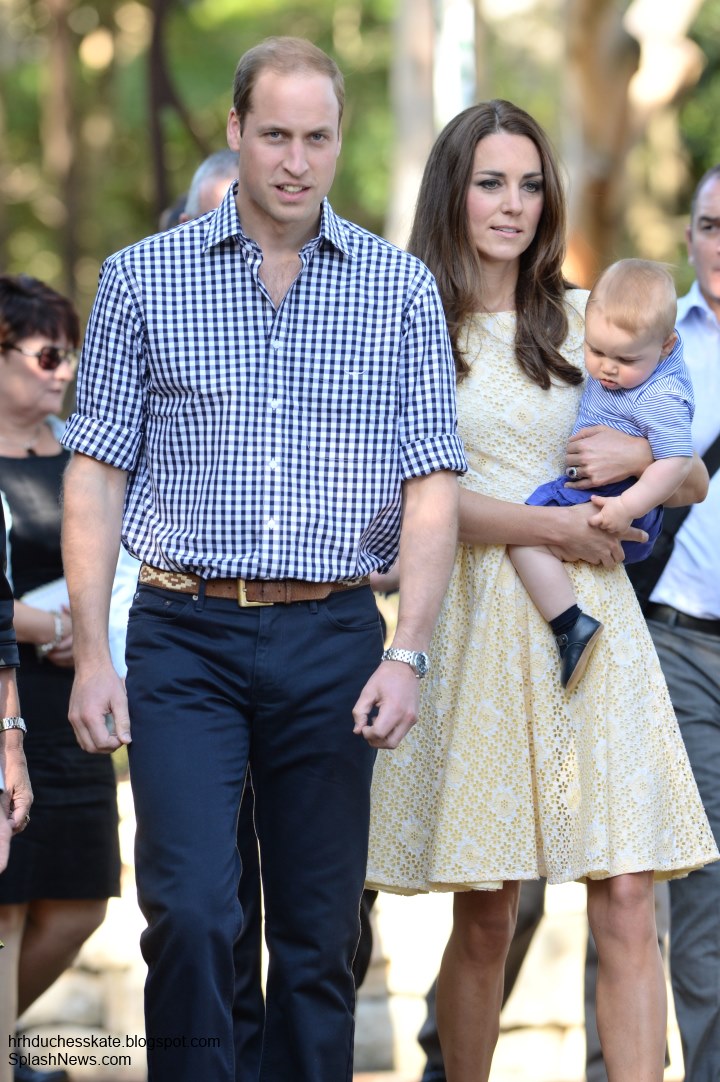 Little George taking in his surroundings! 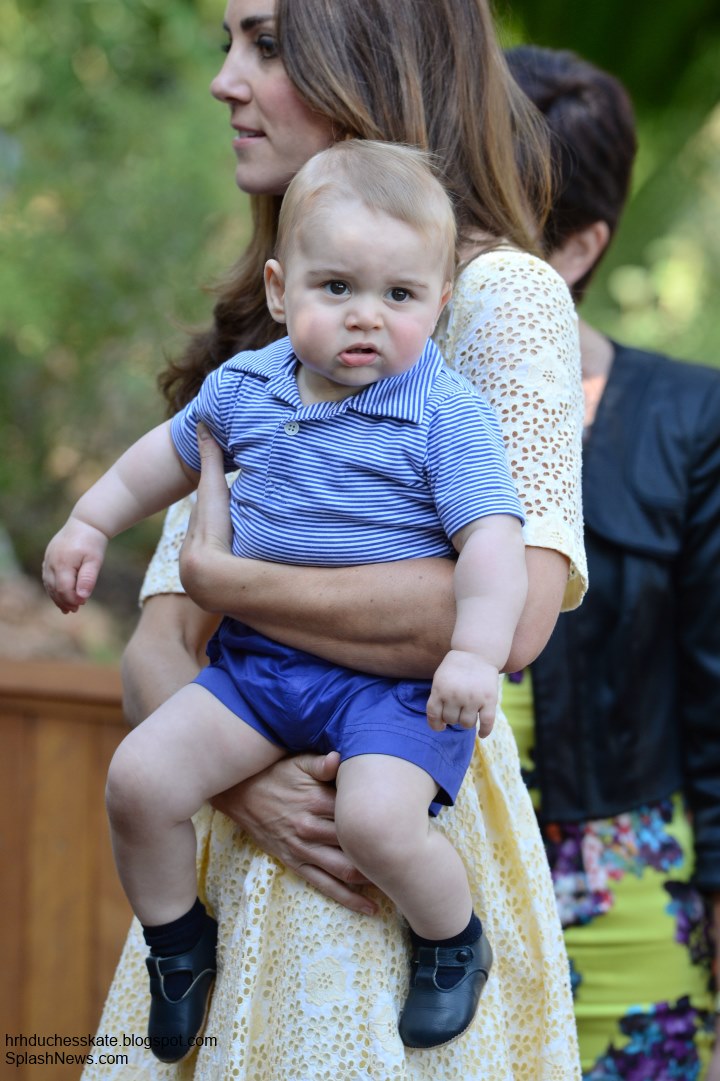 The royals first viewed the Bilby Enclosure. On the occasion of Prince George's birth, the Government of Australia made a donation to the zoo for its bilby preservation programme, which is helping to restore numbers of the animal to the wild. According to the Palace, William and Kate were delighted to hear the enclosure will be named after their son. 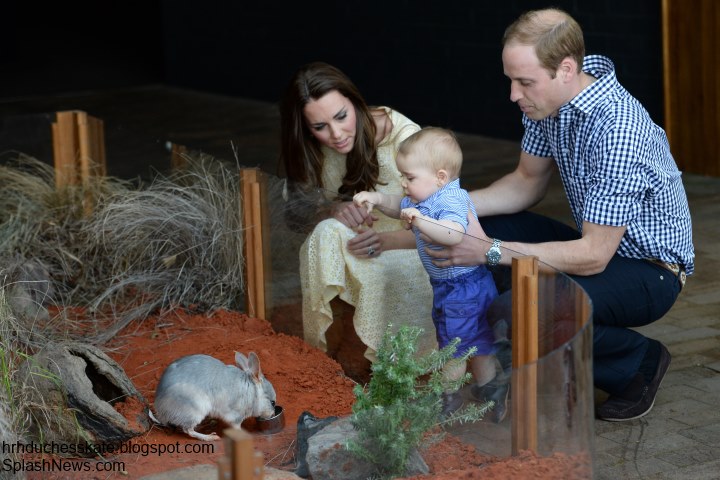 George looking at the bilby (oh the cuteness). 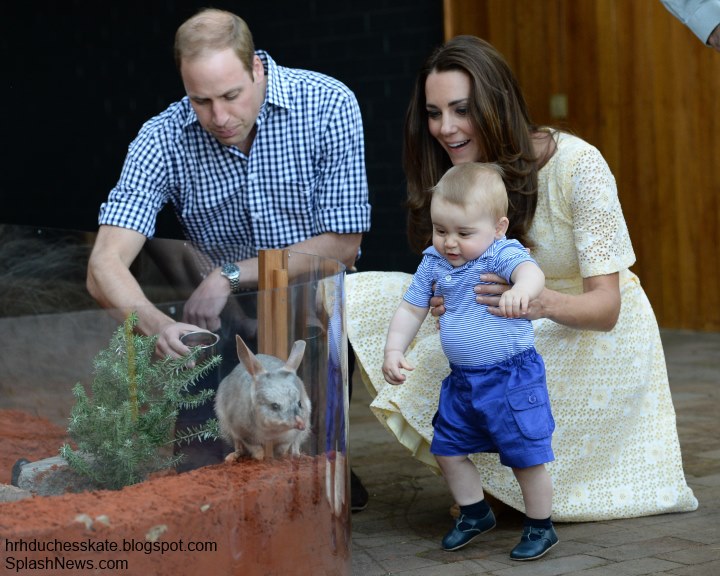 William turned to Kate and said "He's trying to grab his ear", to which Kate replied "If he gets it he'll never let go". 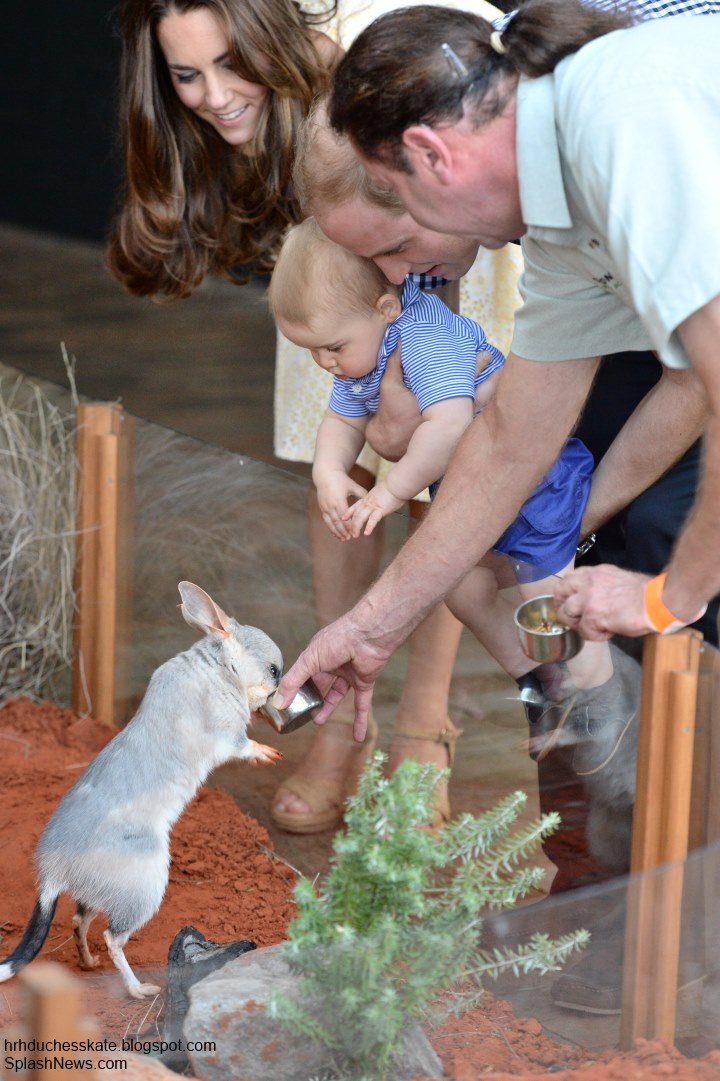 The little prince was very happy to receive a toy bilby, though he proceeded to throw it to the ground in excitement! 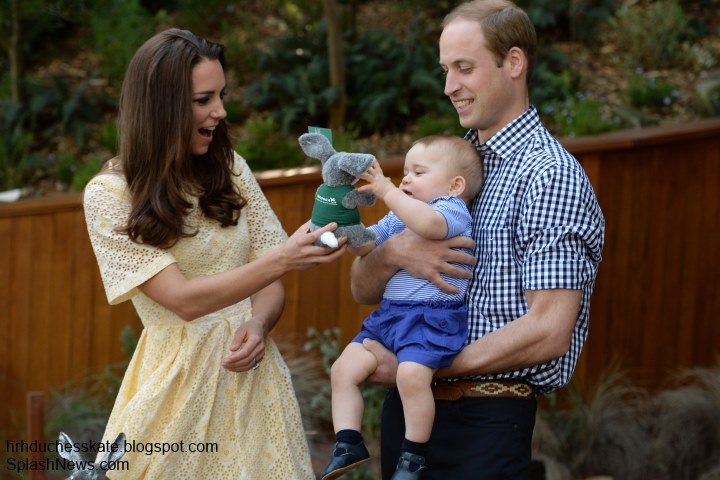 Kate pointing out animals to George. 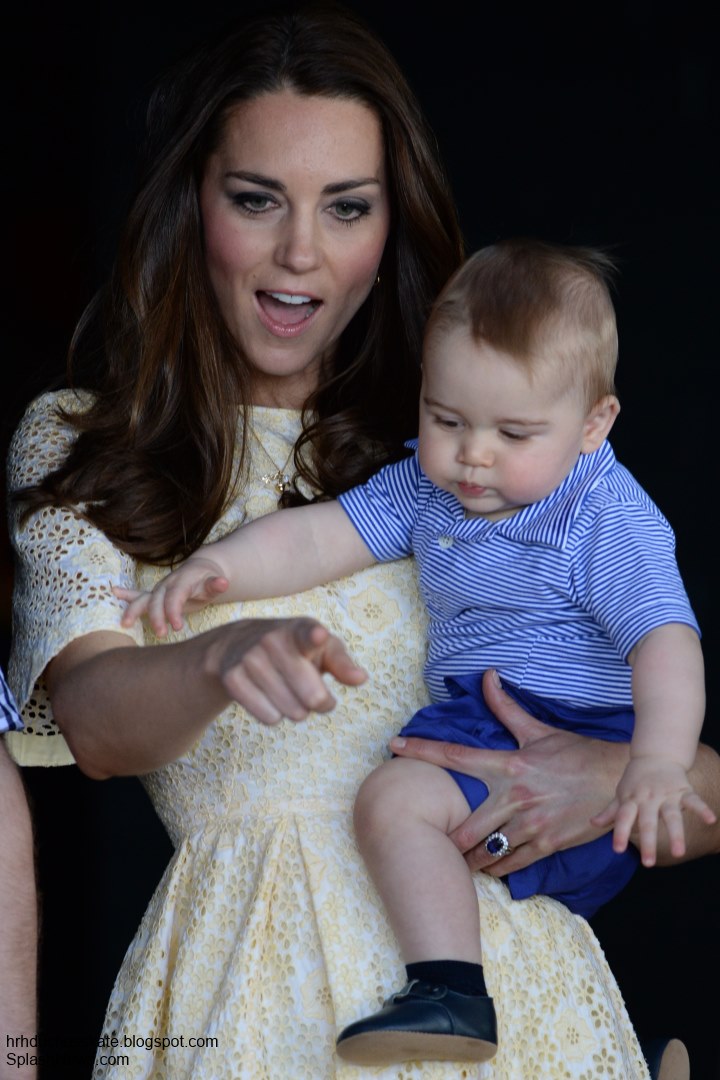 
It was wonderful to see William and Kate interacting with George. They really are doting parents. 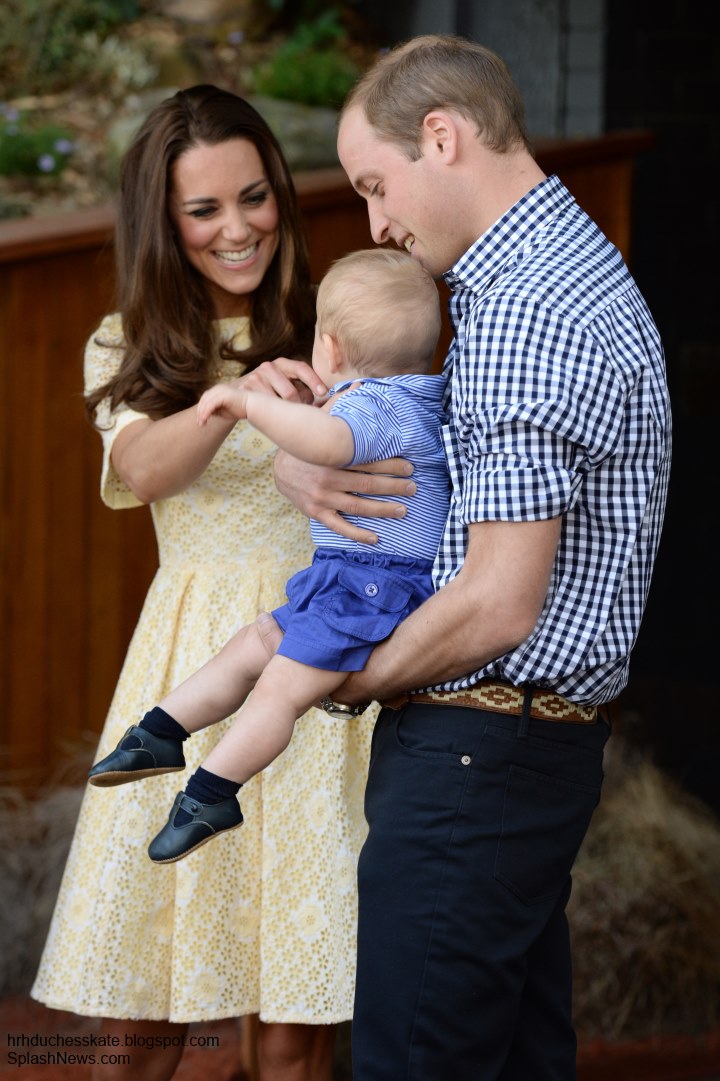 Taronga Zoo is the city zoo of Sydney and is located on the shores of Sydney Harbour. It was officially opened in 1916. Divided into zoo-geographic regions, the 21-hectare facility is home to over 2,600 animals and 340 species.


At Taronga, they believe humans and animals can share the planet. Staff are working tirelessly to achieve a shared future, helping threatened species to breed, protecting their genetic diversity, and even re-introducing them to the wild. They're striving to be a centre for conservation excellence and aim to inspire individuals and communities through their work.


It is the ideal place for a family day out with so much to offer.


The Taronga Zoo ferry services are the preferred mode of transport for many tourists, providing a twelve minute ride from the city to the location.

The view from the zoo is quite exceptional.


Animal lovers may be interested to hear you can adopt an animal, including a bilby, or support one of the very worthy appeals at Taronga Zoo. All details can be found on the official website.

There was so much interest in today's visit the zoo was full to capacity.

After the bilby enclosure visit, William gave George to nanny Maria whilst he and Kate continued to explore the zoo. Prince William was eager to learn more about ongoing conservation projects. 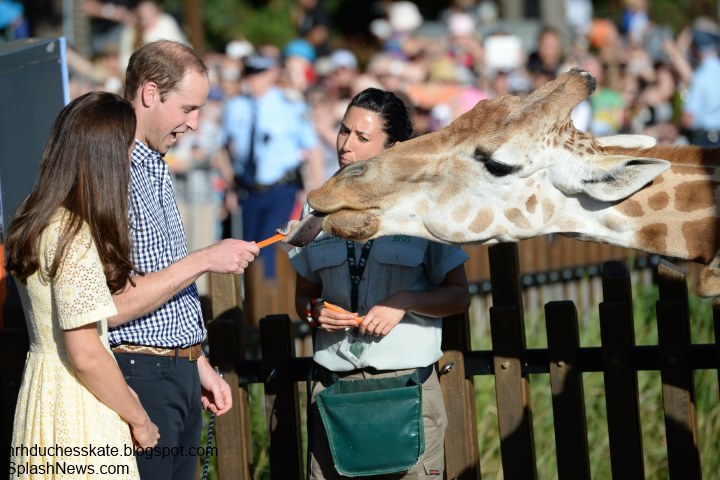 
Prince William said meeting the koala was his favourite part of the visit.

William and Kate laughed as birds swooped over the heads of the assembled media.

Kate repeated the primrose yellow eyelet dress she wore in the Solomon Islands during the last royal tour in 2012. The dress is by an independent designer and features a boat neckline, full short sleeves and a self belted waistline.

A closer look at the fabric. 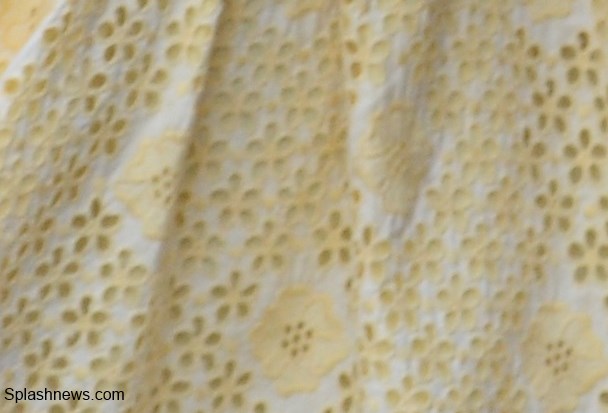 It's a very pretty dress, perhaps most appropriate for a warmer climate. It's very nice to see it again.


Kate accessorised with her Stuart Weitzman Minx Wedges. The stylish camel wedges are currently available at Zappos for $395 with Free Shipping. They're currently on sale in ivory at 6 p.m. reduced from $395 to $118.


Kate wore a gold pendant with three charms. The eagle-eyed Anna from My Small Obsessions identified the charms as the oak leaf, mushroom and acorn from Asprey's Woodland Collection. Many readers will know the acorn is from the Middleton family crest. Perhaps it was a gift from one of the Middletons? The bracelet below features several charms including the three we believe Kate is wearing. 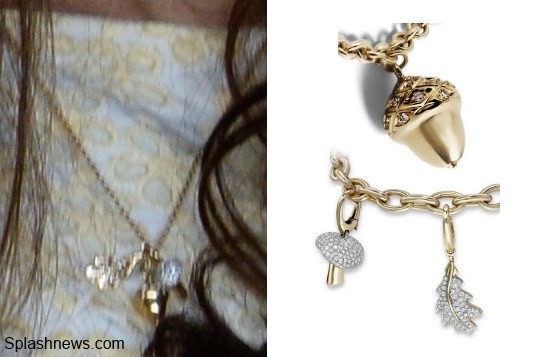 Kate completed the summery look with her Kiki McDonough Citrine Drop Earrings. The 18K gold pear drops are available at Neiman Marcus for $740.


George looked adorable in the Rachel Riley Striped Jersey Polo and the navy Pocket Shorts. They're available for $69 and $89 respectively. The prince also wore his Early Days Alex Shoes (with thanks to HRH George Pieces). It was an incredibly cute look for George. 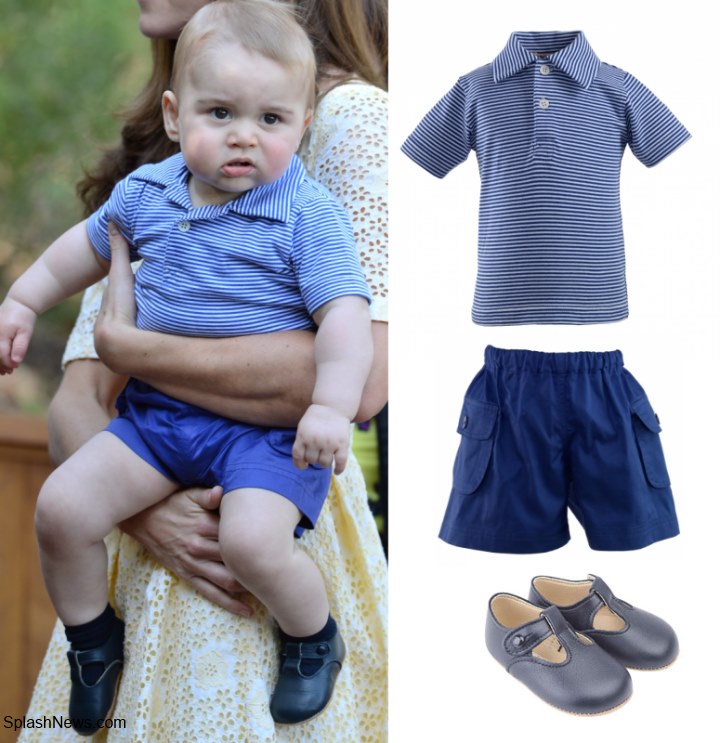 While we're on the subject of style, Prince William looked pretty darn stylish in his gingham shirt - a welcome change from the blue suit he's been sporting and most appropriate for the zoo and handling his son.

One of our lovely readers, Charlie, suggested William's shirt is by well-known Australian brand R. M. Williams. Below we see the brand's $125 Forster Shirt. I contacted the brand who confirmed it. How wonderful to see William supporting Aussie fashion.


You can watch a video of George meeting his bilby at YouTube and watch the adorable tot throw his toy bilby away in this video. For our last photo from the zoo, take a look at this precious shot of William kissing George's head.


Following the zoo, the royal party relocated to Canberra for the remainder of their visit where they will stay at Government House. 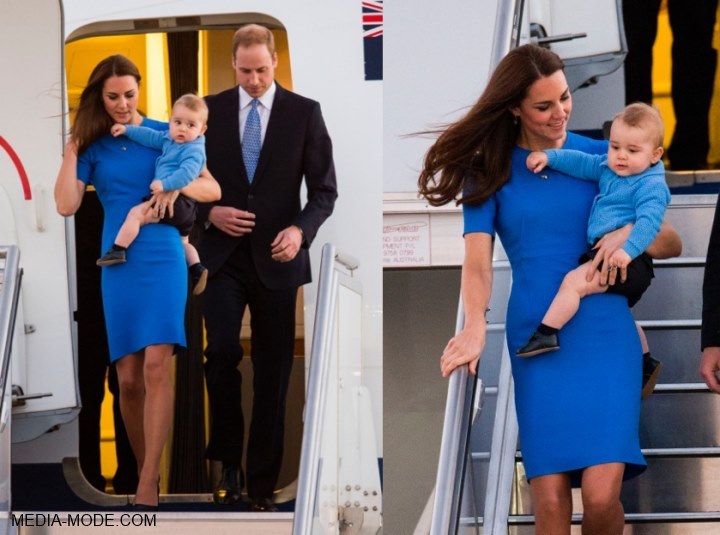 They were welcomed by Governor-General Peter Cosgrove and Minister for Foreign Affairs Julie Bishop. The Duchess received flowers upon arrival. 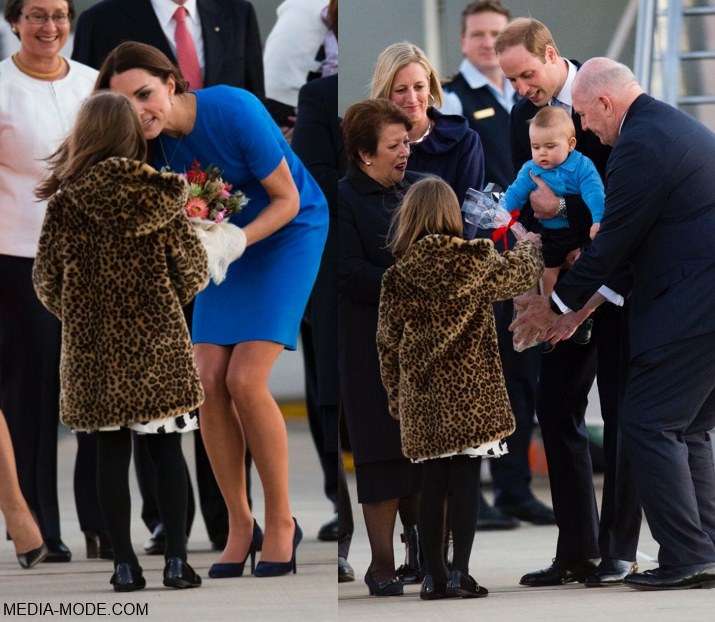 Little George looked happy after his visit to the Zoo. 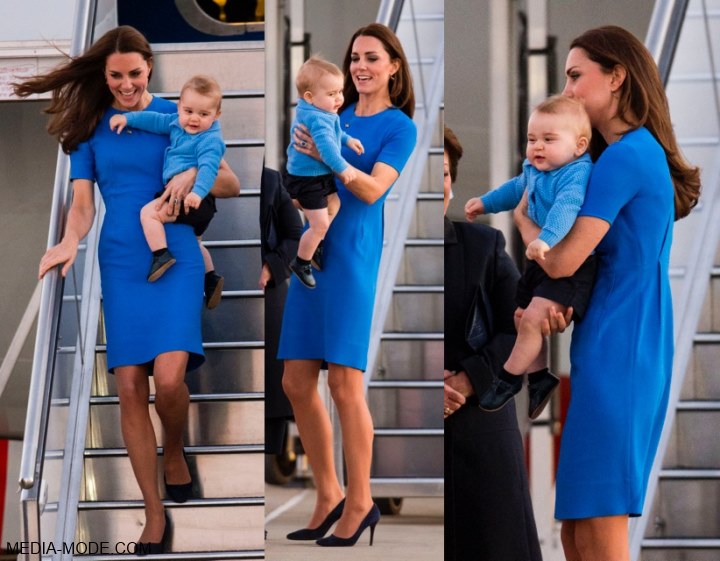 George was introduced to a little boy :)


For Kate's third outfit for the day, she wore her Stella McCartney Ridley Stretch Dress from the Fall 2012 Collection. The Duchess previously wore it during the London 2012 games and for the Aiming High Exhibition. 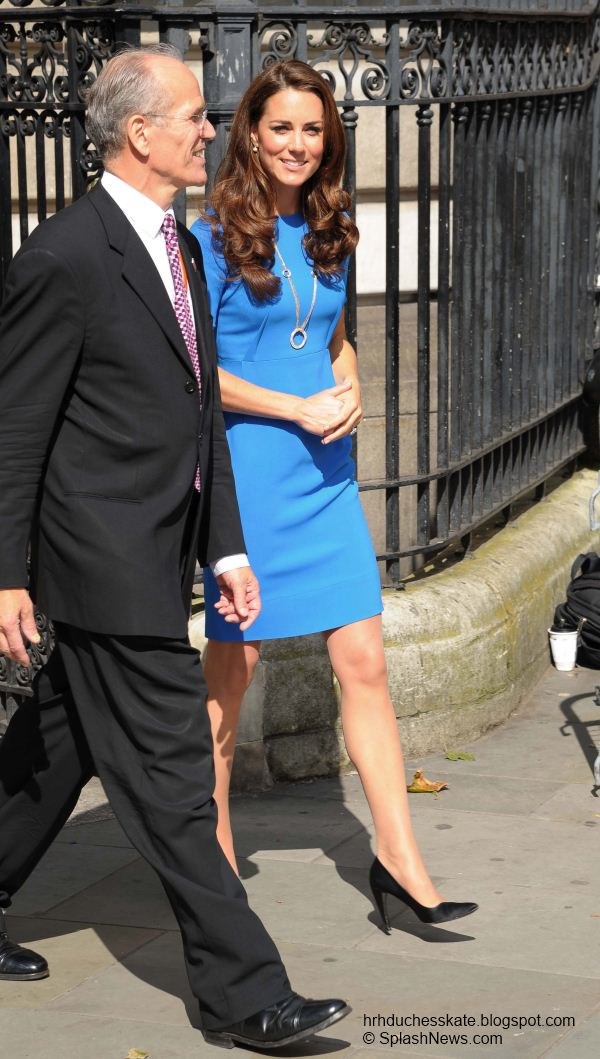 
Tomorrow (Easter Monday) is a private day for the royals. In case you've just joined us, this is our third post today.

We'll see William and Kate on Tuesday when the couple visit Uluru.
Posted by Admin at 06:29:00