The Duke and Duchess of Cambridge departed for a two-day trip away from Wellington (and from Prince George) this morning for their busiest day of the royal tour yet. 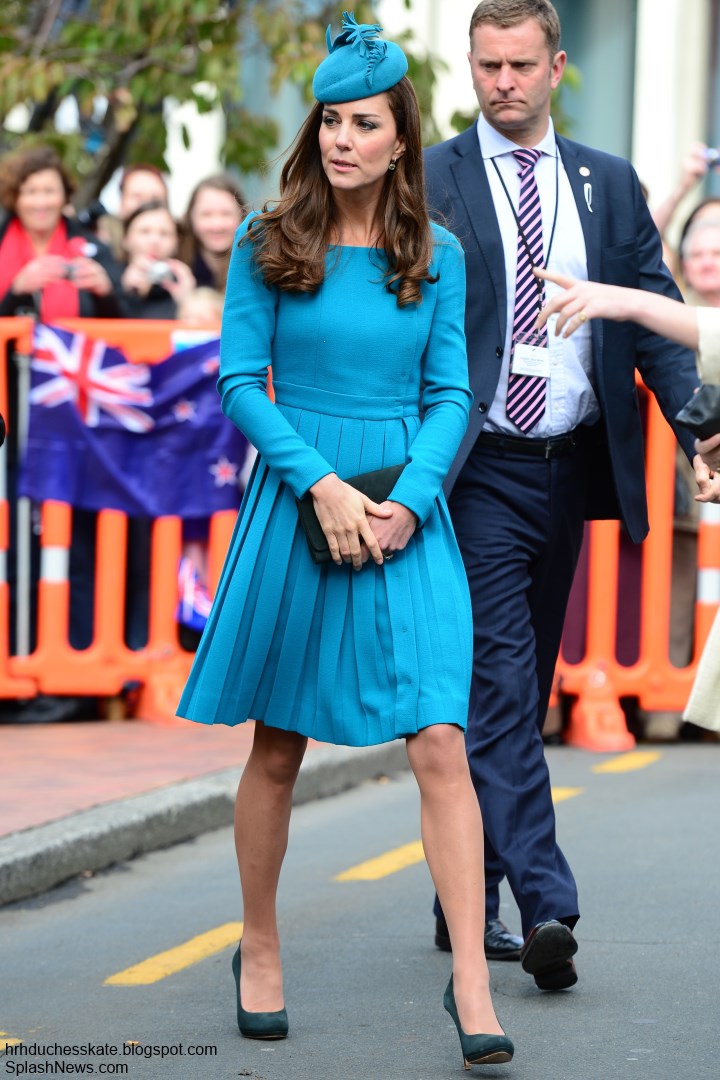 The Duke and Duchess were all smiles as they stepped off the plane.

The couple were greeted upon arrival at Dunedin Airport by representatives of Ngai Tahu, which is the principal Maori iwi, or tribe, of much of the South Island.

The press travelled with William and Kate on the Royal New Zealand Air Force plane, and were behind the curtain in business class. Sky's Paul Harrison shared these snaps.


William and Kate then attended a Palm Sunday service at the Cathedral of St. Paul. Palm Sunday is a Christian feast that falls on the Sunday before Easter.


St. Paul's Cathedral is mother church of the Anglican Diocese of Dunedin and the seat of the Bishop of Dunedin. It has a very interesting history. In 1904, William Harrop, a prominent Dunedin businessman died and left the bulk of his estate to fund a new cathedral.  However, release of the money was conditional on £20,000 being raised towards the cost of the building. It took over nine years to raise the money, and on 9 June 1915 the foundation stone of the cathedral was laid. As you can see the architecture is beautiful, with large piers and a vaulted ceiling.


A 3,500 strong crowd waited outside the cathedral. 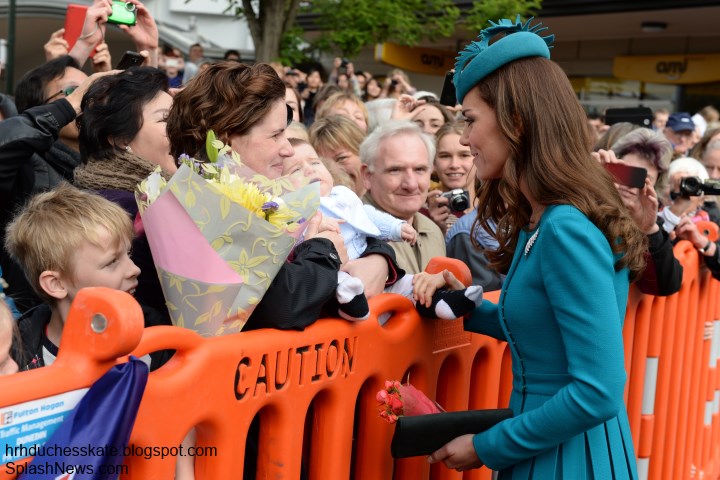 We've been waiting to see Kate in a New Zealand designer - today she gave a nod to the country in a teal dress by one of her go-to designers Emilia Wickstead. The designer was born in New Zealand, and her mother, Angela Wickstead, ran a successful bespoke dressmaking service in Auckland when Emilia was growing up, which helped start her on the road to becoming a successful fashion designer. 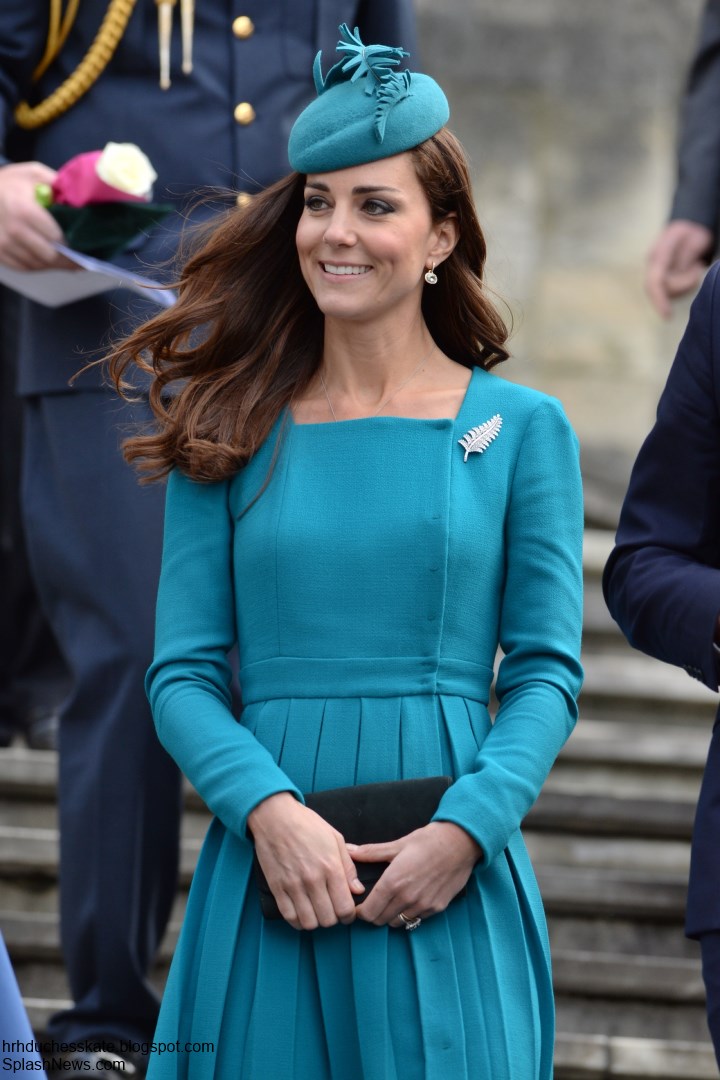 Does the dress look familiar to you?

No, you're eyes are not deceiving you. It appears Kate's dress is identical to the pale pink Emilia Wickstead 'Alice' coatdress the Duchess wore for The Queen's Sovereign's Luncheon and The Queen's Garden Party in May 2012. Kate obviously loved the garment and ordered another one from Ms. Wickstead.  It's also entirely possible the pink one was dyed. (Now that's thrifty).

For the second time during the tour, Kate accessorised with The New Zealand Fern Brooch loaned by The Queen.


Kate's stylish teal hat is by milliner Jane Taylor. The Duchess wore her Kiki McDonough green amethyst earrings and a necklace with a silver chain. For those who enjoy Kiki jewellery, it's now available at Neiman Marcus. 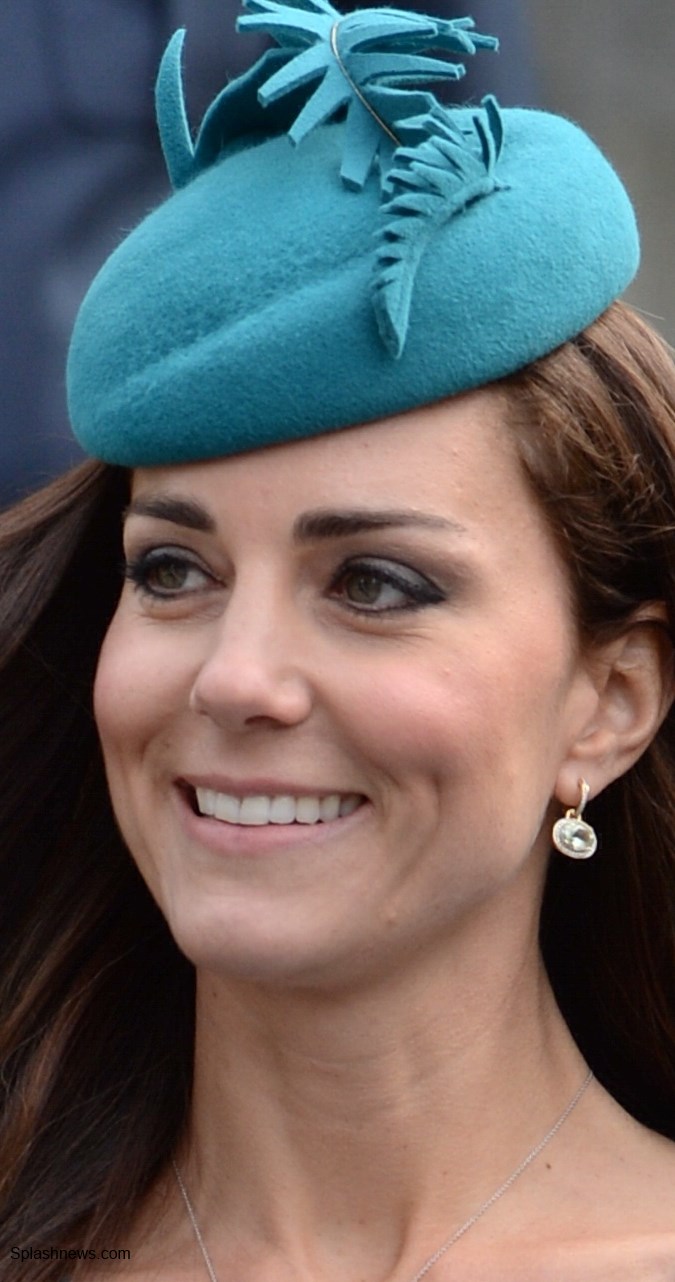 Afterwards, Their Royal Highnesses travelled to the city's famed rugby stadium to watch a festival of Rippa Rugby. For those unfamiliar with the sport (such as yours truly, who had to ask the other half to explain it in very simple terms) it's basically a non-contact version of rugby for youngsters in which the tags are "ripped" from the belt of the ball-carrier, rather than physical tackles being made. This puts emphasis on ball skills instead of physical prowess and allows for teams made up of both boys and girls. 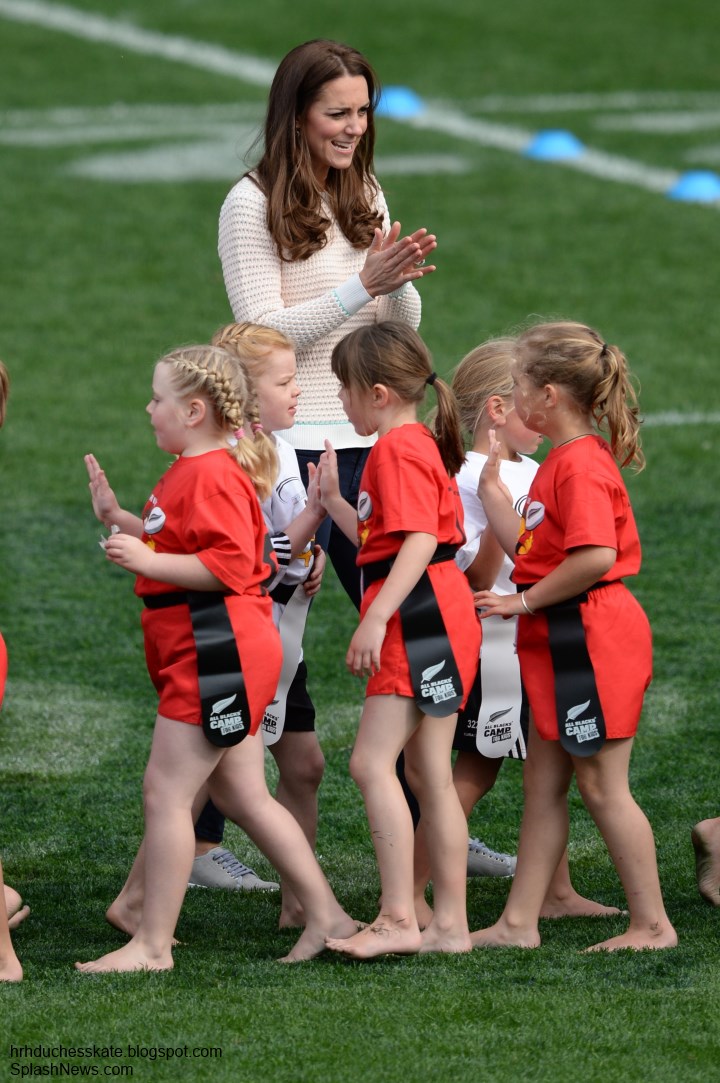 The Duke and Duchess each encouraged and coached a team from the touchline. Before the event William's private secretary Miguel Head said we could expect "some pretty competitive outbursts". 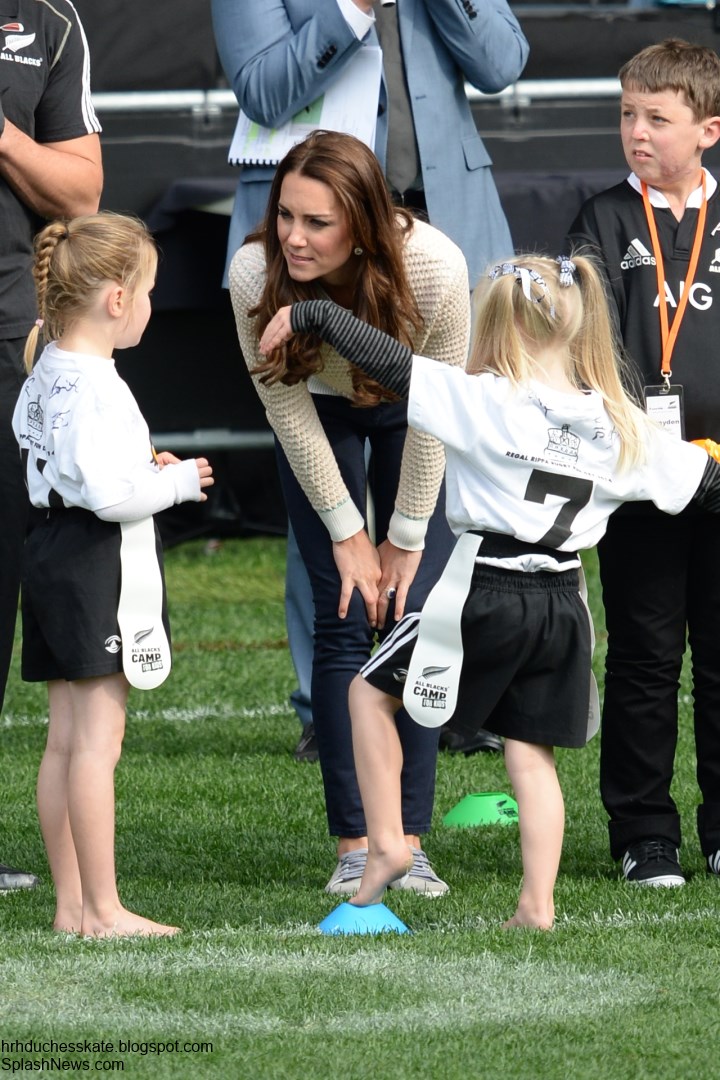 William was very pleased when his team won 30-20.

A fun day was hosted in honour of the event. More from the All Blacks website:

'The Regal Rugby Fun Day begins with food and entertainment, as well as rugby. All Blacks taking part will include Richie McCaw, Aaron Smith and Ben Smith.

Mayor of Dunedin David Cull said, "For most people this is a once in a lifetime opportunity to see the Duke and Duchess. We are very fortunate they are coming to our city and I'm sure their visit will be a memorable one."'


Did we mention these two have great chemistry? 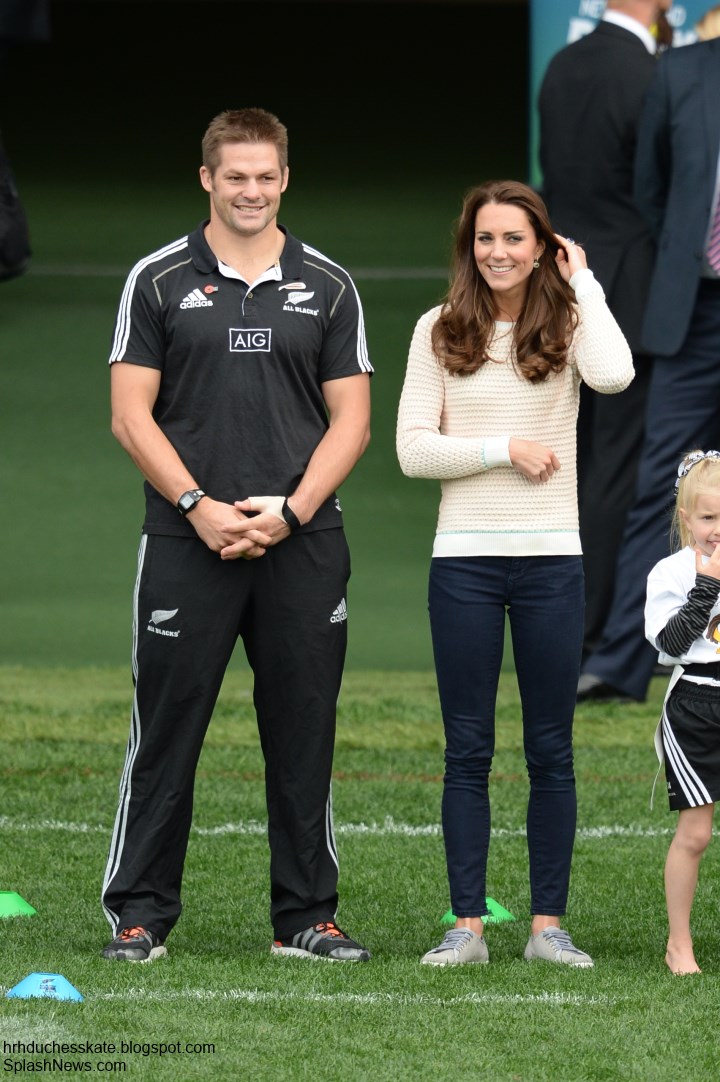 Kate wore the cream Jonathan Saunders Deborah Egg-Knit Sweater. The slim-fitting ribbed sweater has a round neck and long sleeves. It's sold out in cream but currently on sale in pink and blue at Matches reduced from €474 to €142. The Duchess teamed it with skinny jeans and her Mint Velvet plimsolls.


To watch videos from the events check out TVNZ. They have a very nice selection and they're frequently updated.

This afternoon, The Duke and Duchess of Cambridge travel to Queenstown where they will visit a vineyard, sample wine and enjoy a rafting trip aboard a shotover jet. We'll have another post covering their Queenstown visit; they're expected to arrive a 2 p.m. (3 a.m. UK time).
Posted by Admin at 00:21:00