Kate in Cornflower Blue McQueen for Day in Blenheim

The Duke and Duchess of Cambridge took a flight from Wellington to Woodbourne Royal New Zealand Air Force Base this morning. From there they were taken to Seymour Square in Blenheim for a busy day of appearances. 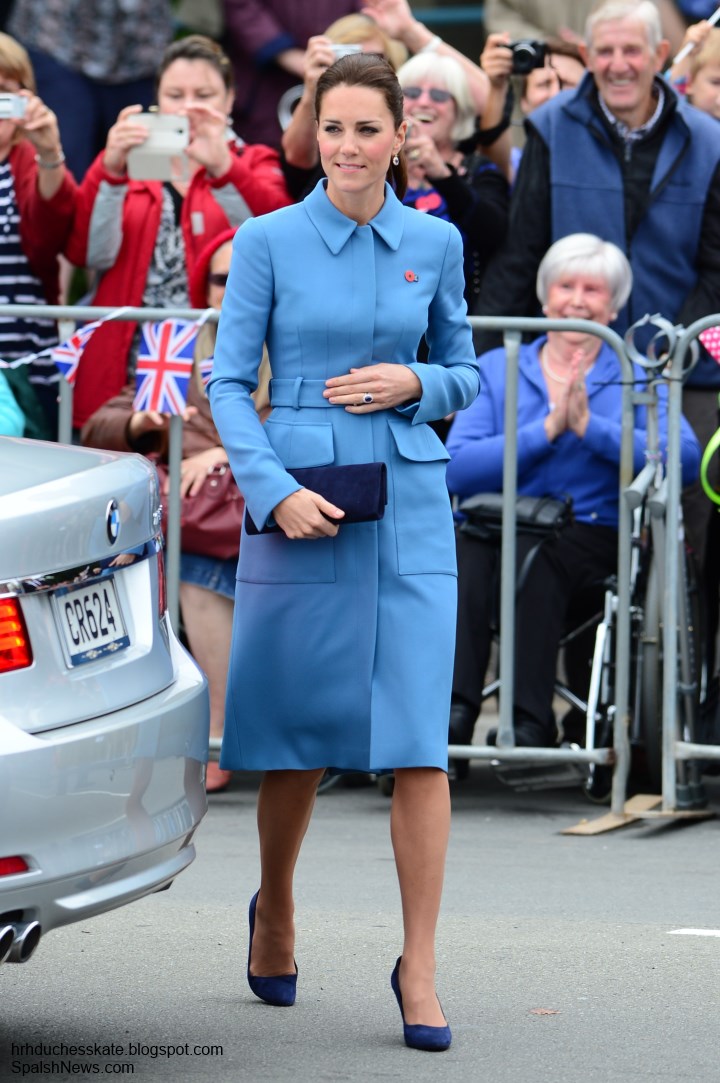 William and Kate kicked off a year of Royal Family commemorations of the First World War centenary by participating in a wreath laying ceremony at Blenheim War Memorial and Clock Tower in front of 100 returned service men and women.


They stood solemnly as the Last Post was played and the Ode of Remembrance recited.


The wreath was prepared by the couple before their appearance and the card read 'Never forgetting those who have paid the ultimate sacrifice for our freedom'. It was written by William and signed by them both.


A closer look at the wreath.


Blenheim's 16 metre high clock tower was completed in 1928 and is Marlborough's principal memorial to 419 locals who died in the First World War. Stone was assembled from a variety of locations around the province. The only stone not used from the province is Australian sandstone which is symbolic of the New Zealand and Australian collaboration during World War I. It cost £4550 paid entirely by public subscriptions and was designed by Roger Bacon.


The couple had the opportunity to speak with a number of veterans who served through various conflicts.


Kate spoke to veteran Wilton Sterritt who showed her a photo of himself and Prince Philip. Kate smiles and replied "You've changed a bit". 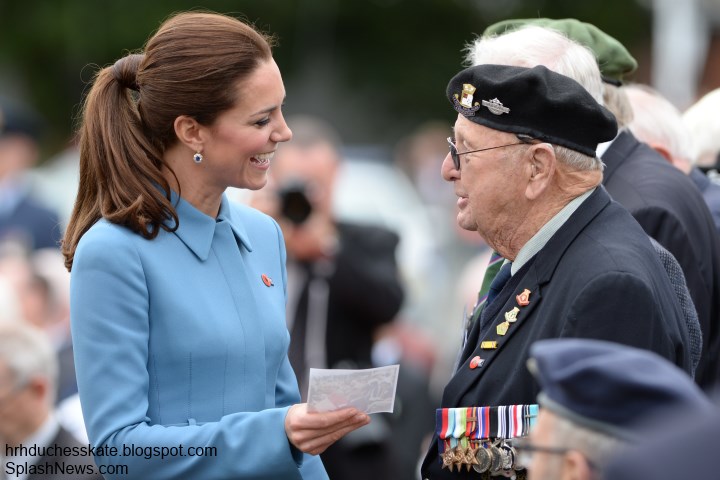 A look at the photo Mr. Sterritt showed Kate.


Royal photographer Mark Stewart shared a photo of the Diana, Princess of Wales memorial bench in Seymour Square, undoubtedly William and Kate noticed it during their walk past.


After the ceremony, William and Kate joined Mayor Alistair Sowman for a walk around Seymour Square - the first public walkabout of the royal tour. For those unfamiliar with the area, Blenheim is a relatively small town with a population of roughly 28,000 residents, almost a third of that number turned out to meet the royal couple.

The Duchess received flowers and presents for Prince George.

It's the first time we've really seen the crowds come out for the royals during the tour thus far.

Two little princesses waited for hours to catch a glimpse of Kate.


Kate was given a purple beanie - The Diana bear- a tribute to the late Princess of Wales on her death. A limited number of the bears were made so it was quite a special item to give to the Duchess. Also you can see Her Royal Highness is wearing a Rainbow Loom bracelet she received from a member of the crowd. I'm told they're extremely popular with youngsters down under.


After the walkabout, the Cambridge's enjoyed a private lunch with the Mayor and his wife.


Next, Their Royal Highnesses visited the Omaka Aviation Heritage Centre where they were given a guided tour of the exhibits by The Lord of the Rings director Sir Peter Jackson. They toured the Knights of the Sky exhibit which includes Peter's collection of WWI aircraft and artefacts.


One of the stunning WW1 scenes recreated using Peter Jackson's collection of planes. This is the 'crash site' of German ace pilot 'The Red Baron' Manfred von Richthofen, with soldiers taking trophies from his famous red triplane.


The rescue of wounded crewmen is depicted in the exhibit.

A flying day was organised to provide entertainment for royals and public alike. A number of heritage aircraft were on show during the course of the day. 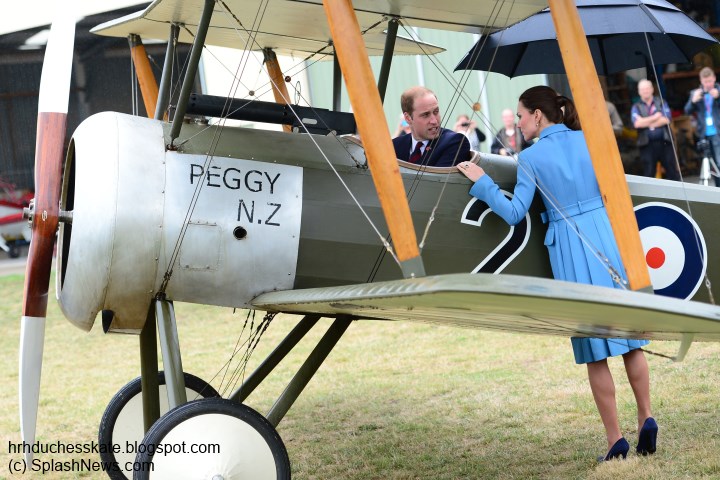 
The dull weather didn't dampen the spirits of the royal couple who seemed fascinated by the aviation history on show. 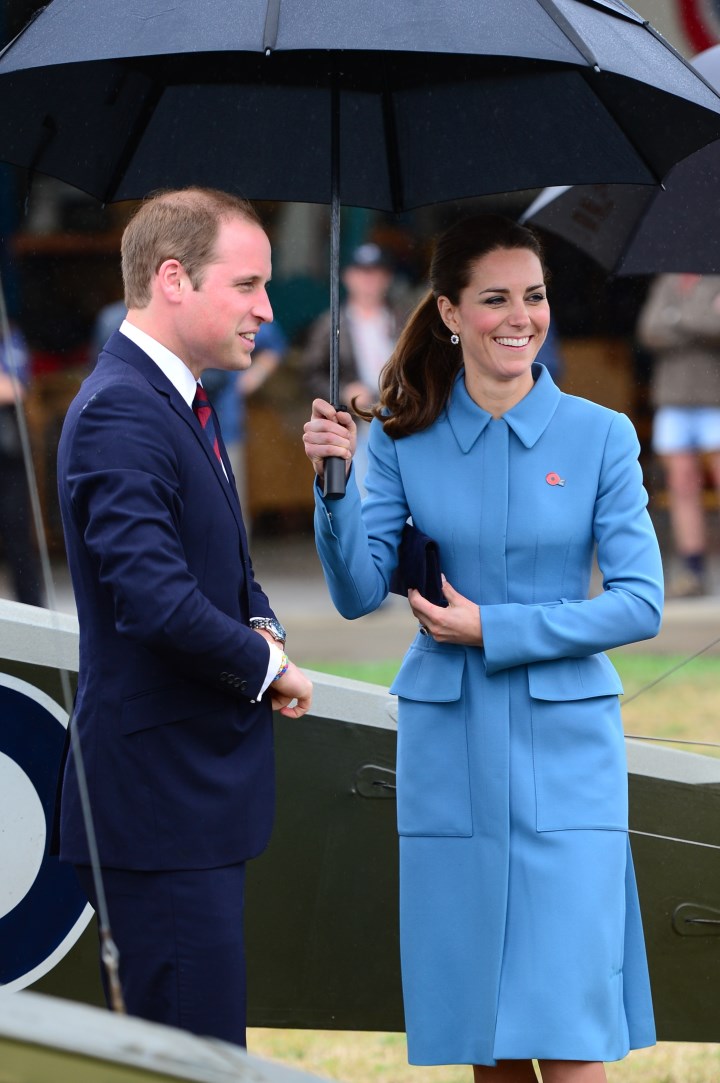 
A great shot of the couple. 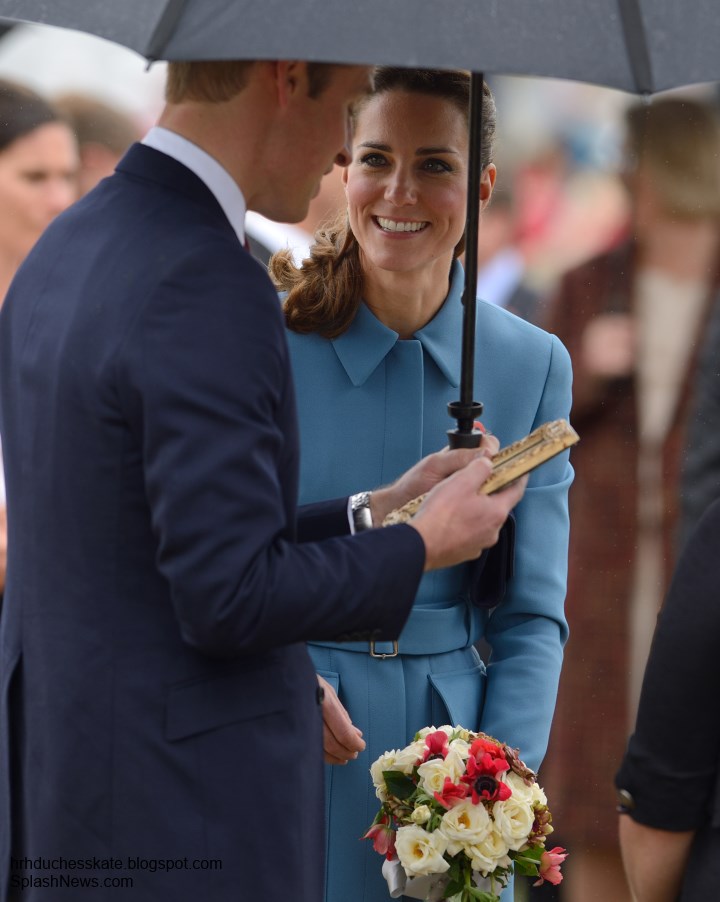 The striking piece features peplum overlay and a buckled belt. It has a pleated back, snap-fastening cuffs and is fully lined. We believe Kate's garment is a bespoke version of the piece shown below. It's available in powder blue at Net-A-Porter for €2,595.


Below we see the piece in black sans collar - the Alexander McQueen Utility Coat Dress. As you can see, Kate's coat dress appears to be a combination of both pieces.

Kate is not the first royal to take notice of the stylish garment. Below we see The Countess of Wessex wearing the very similar Peplum-Waist Coat at the Commonwealth Observance Service in March.

Her Royal Highness wore a fitted navy dress underneath.

Kate teamed the coat with her Alexander McQueen suede pumps and carried her Stuart Weitzman clutch.

The Duchess wore her sapphire drop earrings and a WW100 poppy pin (with thanks to Daisy). It was a most appropriate choice for the event.

Kate wore her hair in a ponytail; I thought it looked absolutely lovely - very youthful and fresh. It also showed off the details of the coat nicely. I thought it a superb ensemble, which hit all the right notes for the nature of the day. What do you think? 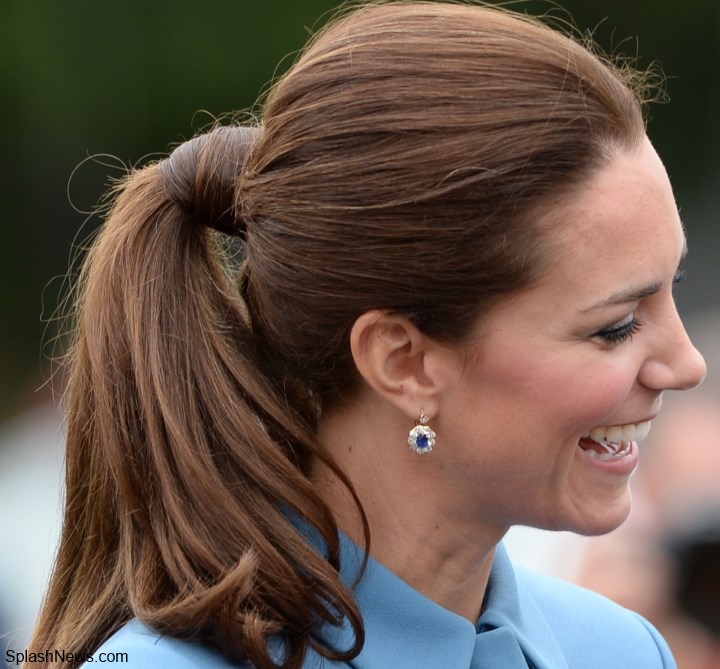 If you wish to view videos from the day click Here and Here.