The Duke and Duchess of Cambridge began a day of engagements in Canberra with a visit to the National Arboretum. Initially, the couple were scheduled to visit the National Portrait Gallery first but it was announced earlier the two were switched. 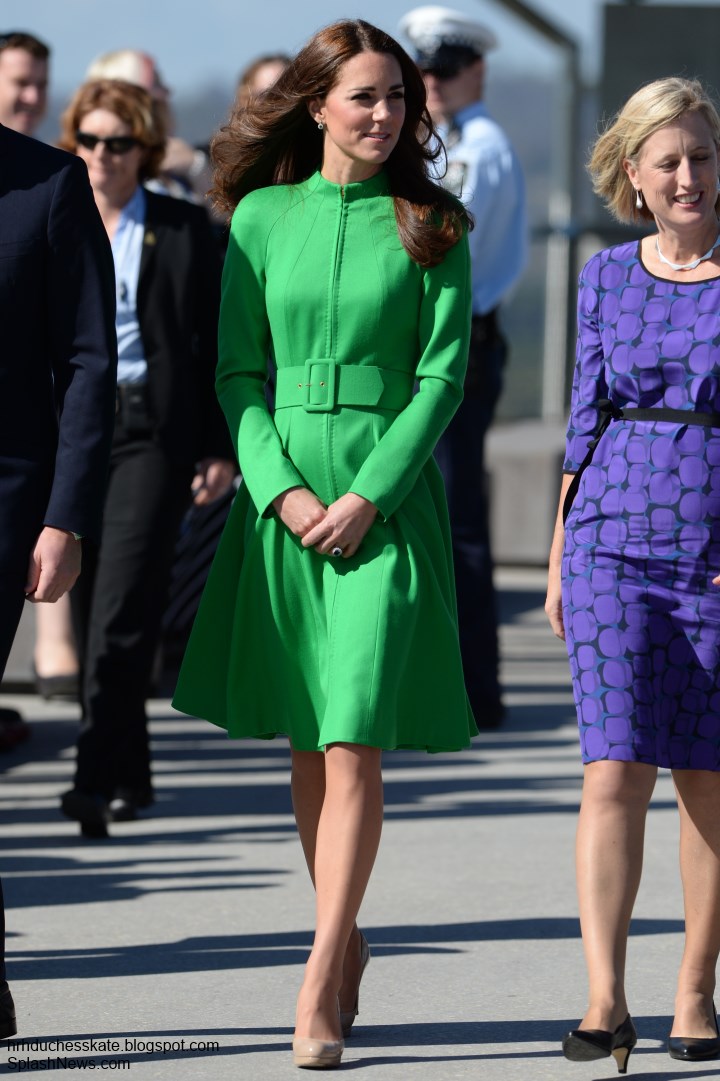 The Arboretum has only been open for a year, so its plans for 100 forests in the area are in the very early stages. To help them on their way just a little, the Duke and Duchess planted an English oak tree.

The couple were assisted by twin brothers Oliver and Sebastian Lye. Sebastian has Down Syndrome and also has a visual impairment and is hearing impaired. He recently received a little legend award for achievement whilst dealing with adversity. Their mother is going through an ongoing battle with cancer, so this morning provided an opportunity for the family to relax and enjoy meeting the royals. 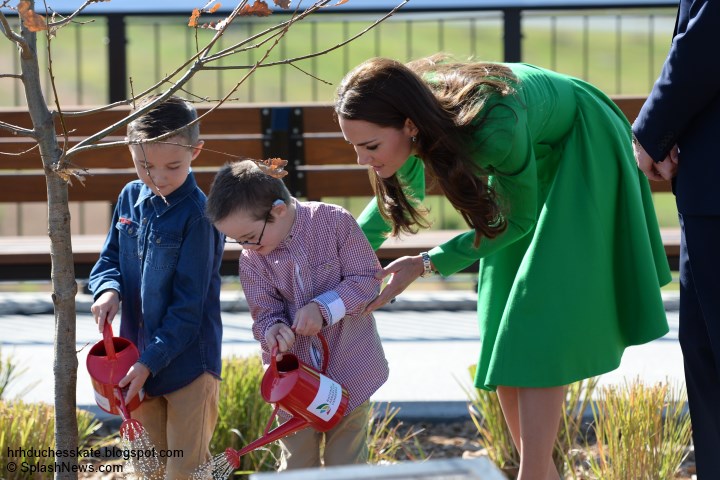 William and Kate were quite taken with the twins.


Kate chatted with the boys.


A look at the plaque.


Afterwards, the couple met with local groups of children and their parents. 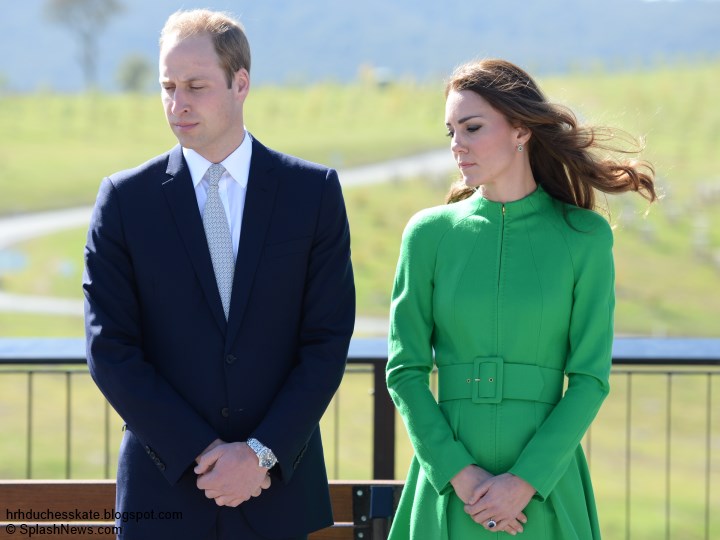 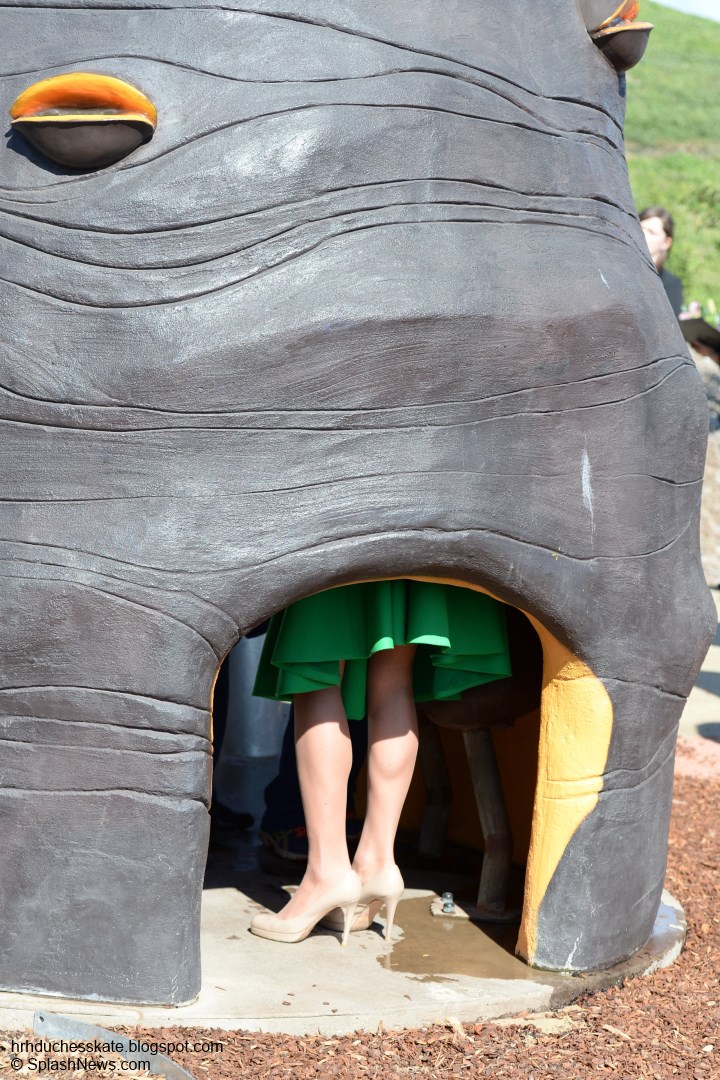 The Duke and Duchess then moved to Parliament House, where Prime Minister Abbott hosted a reception in the Great Hall. Prince William changed his tie for this event. Perhaps it was down to a coffee spill or he felt it more fitting to wear a more formal tie.

Six hundred guests were in attendance.

In his speech Prince William said:

'Reluctantly Catherine, George and I leave Australia tomorrow. Thank you for the warmth and generosity that has been shown to us throughout our visit. We go away with wonderful memories, and George goes away with his cuddly wombat which he has taken to chewing so lovingly.'


William also revealed he, Kate and Harry will take part in next years Gallipoli centenary celebrations. At the moment nothing is confirmed, however it seems likely the trio will travel to Turkey next April.

A look inside the Great Hall before the reception began.


Afterwards, the couple visited the National Portrait Gallery, where they viewed an exhibition of artworks and met some of the subjects of portraits, all of whom - naturally - are well-known Australians who are highly accomplished in their respective fields.


The couple viewed a beautiful of portrait of Crown Princess Mary of Denmark. Mary is Australian and was born in Tasmania. The portrait is by Jiawei Shen and depicts the princess posing in Copenhagen Cathedral in 2004. Shen often juxtaposes contradictory elements in his paintings to indicate his sitter's history or situation. He based the princess alongside a column based on the architecture of Amalienborg Palace in Copenhagen. In the background lies the Sydney Opera House. I absolutely adore this portrait of Mary. The formality of it, magnificent teal gown, statement earrings and the insignia of the Knight of the Order of the Elephant.


As many of you know, the Duchess is patron of the National Portrait Gallery in London and has carried out a number of public and private visits there, so this visit was a particularly special one for her.

One of our readers Elkie was outside the gallery today and shared this terrific photo she took. Elkie said there was "definitely a buzz in the air. They're such a lovely couple".


Kate chose a vivid green coat dress by Catherine Walker. It is the second time Her Royal Highness has selected the British label during the tour - the first being a red military coat for the arrival in Wellington, New Zealand. I have to say, I've looked at it several times and it's certainly not my favourite look from the tour. The high neck, the buckled belt, the fabric, the colour... somehow it doesn't quite work for me. Kate herself admitted it left her sweltering. What do you think? 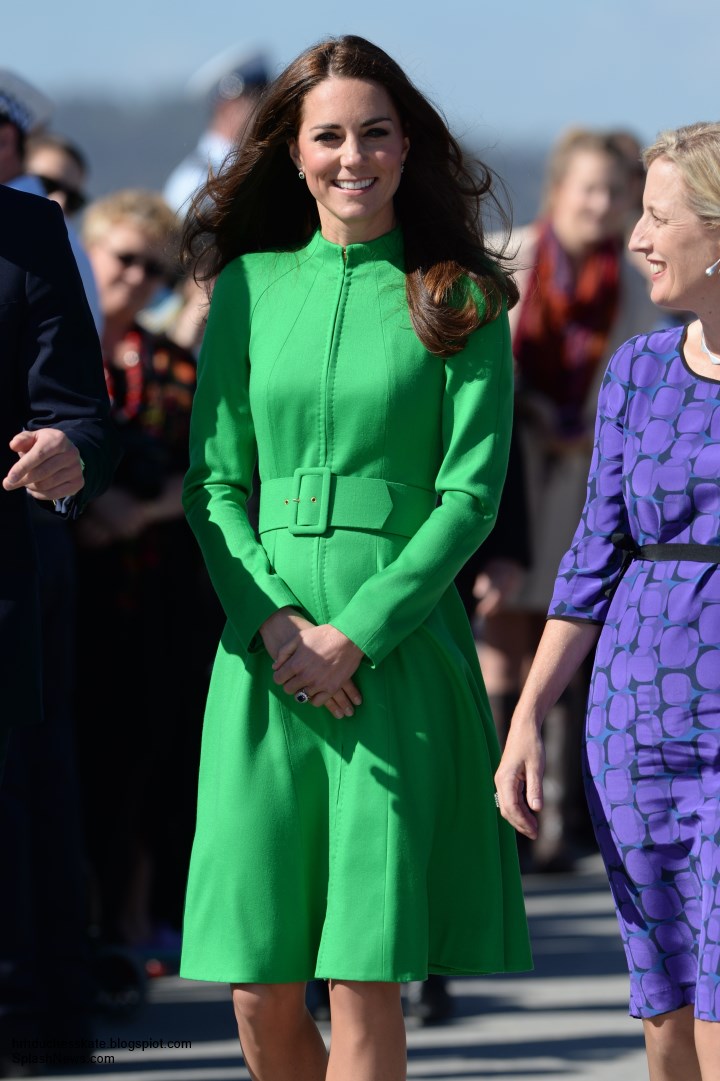 Kate's garment appears to be a bespoke version of two Catherine Walkers. First, the Evelyn Coatdress. It is described as: "The sharp and precisely cut shoulders of this grass green Venetian wool coatdress are softened by the sinuous neckline and full A-line skirt with hand pick stitching". As you can see the neckline on Kate's had been altered.


One of our readers correctly noted similarities between Kate's garment and the Lara Coatdress. As you can see it features the same zipper and high neck.


The Duchess wore the same vivid green in Cambridge, New Zealand. On that occasion it worked very well - readers will recall the piece was by Canadian designer Erdem. 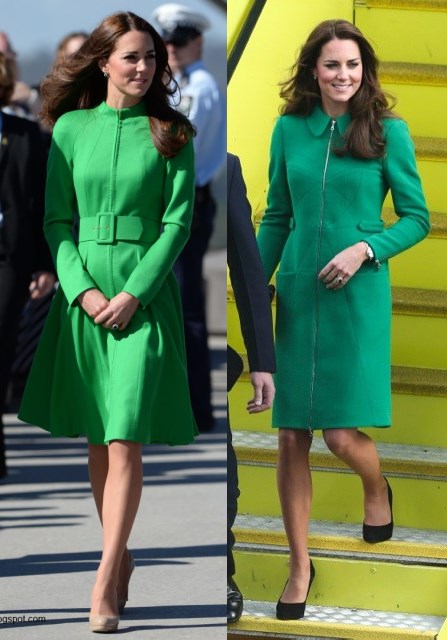 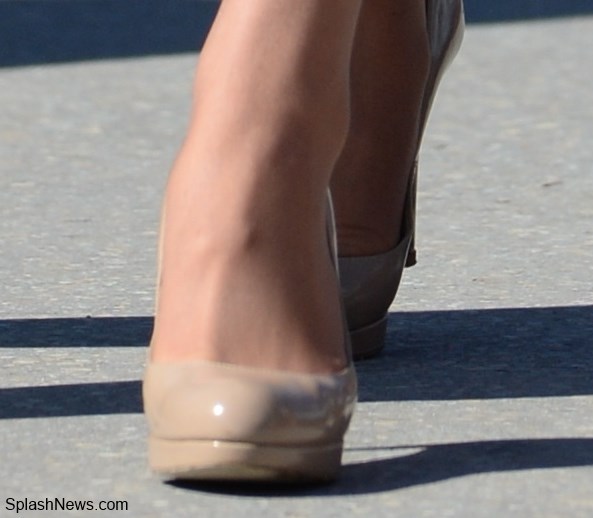 Kate accessorised with her emerald and diamond earrings. 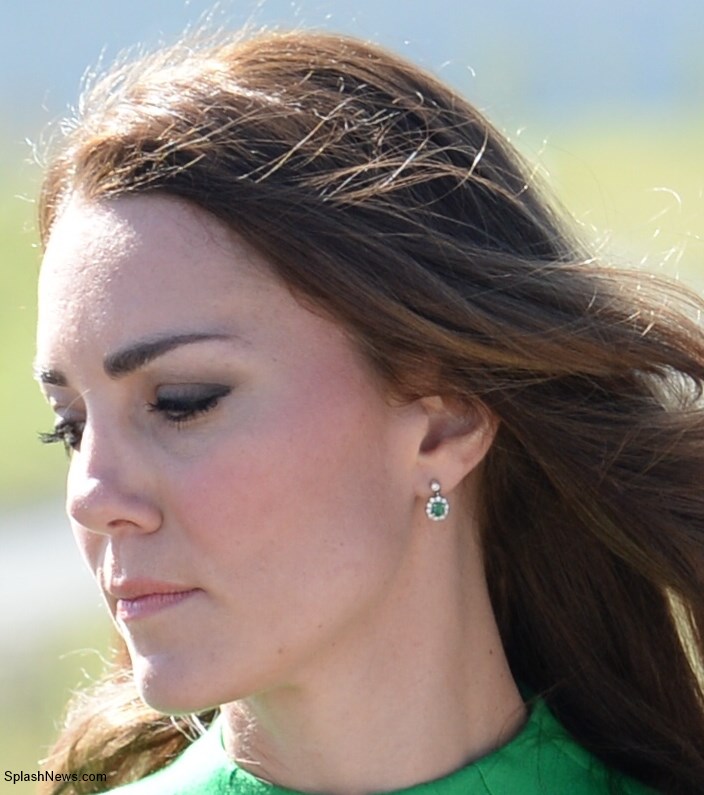 And her Cartier Watch.

We'll be back with another post later, when the Duke and Duchess attend a reception at Government House at 6 p.m. local time. We can expect to see the Duchess in a formal dress; I'm hoping for a full-length gown but we'll have to wait and see :)
Posted by Admin at 02:32:00