With just a couple of weeks to go until the itinerary is announced for The Duke and Duchess of Cambridge's royal tour of Australia and New Zealand, Kate will now have a rather good idea of the engagements she will be undertaking. This will be Kate's third tour, after the Cambridges visited Canada and Los Angeles in 2011 and South-East Asia in 2012, however, this one promises to be the most hectic and packed one yet. From Christchurch to Canberra the couple will undertake several engagements per day over a 3.5 week period encompassing a whole host of events from the Sydney races to state dinners.


No doubt there will be plenty of meetings underway with her private secretary Rebecca Deacon regarding the nature of the events, who the royals will be meeting, charitable organisations they will support, and of course, preparing an appropriate wardrobe with accompanying jewellery. It has been widely reported Her Majesty has selected items from her personal collection for Kate, including pieces with links to Australia and New Zealand, ensuring a personal touch is added - something royal ladies have been doing for generations.

The Royal Vault contains some of the most magnificent and regal jewels in the world but which ones might we see the Duchess wearing in April? One piece which instantly comes to mind is the Australian Wattle Brooch. During the 1954 Commonwealth tour The Queen's State Gift from the government and people of Australia was this stunning brooch.


It is described this way:


The wattle is the floral emblem of Australia and it is said to hold a great sentimental significance for The Queen. Her Majesty wore it throughout her Australian tour, including a visit to Flemington Races in Melbourne. She has worn it on countless occasions since.


During the same tour in 1954, the South Australian people presented The Queen with the stone their region is best known for, the opal, as token of their loyalty and affection. The sizeable Andamooka Opal Necklace and Earrings.

The opal weighs 203 carats and was found at the Andamooka Opal Fields in South Australia in 1949. It is said to be the finest quality opal ever discovered in the fields because of the size and the intensity of fire and flashes of colour it contains. The Queen wore the demi-parure just once during the trip as a courtesy, with the Cambridge Lovers Knot Tiara - a piece we know associate with the late Princess Diana. It has been retired to the vault since then, and though it's not a typical Kate piece, it is a possibility all the same. I imagine people in South Australia would love to see it have another outing.

Another brooch we could see Her Royal Highness wear in Australia is the Hibiscus Brooch. It depicts two Australian hibiscus flowers with ruby centres. The beautiful piece was given to The Queen Mother as a gift from Australia. Following her death in 2002, it passed to The Queen, who has worn it several times including Prince William's passing our parade at Sandhurst.

Whilst researching the brooch, I noticed an old newspaper article from 17 February 1958 in The Age featuring a piece about The Queen Mother's brooch. Should the Duchess wear it in April, it will fill column inches again - 46 years later.


When New Zealand Prime Minister John Key visited Balmoral last September, he gave The Queen a vibrant blue brooch from Eyris Pearls in Christchurch (last week Prince William sent a letter to the residents of Christchurch three years after the tragic earthquake, indicating a visit is very much on the cards). I have a feeling there is a significant chance Kate will wear the brooch. During Mr. Key's visit the tour was discussed and when he meets the Cambridges during the tour it would be a real treat for him to see HRH wearing it.


Next, we look at yet another piece Her Majesty received during her 1953/1954 world tour: The New Zealand Fern Brooch. The diamond and platinum brooch in the form of a silver fern - an important New Zealand Emblem - was a Christmas gift from the Women of Auckland.


Aside from pieces with connections to New Zealand and Australia, Kate will need jewels for formal occasions. When Prince Charles and Princess Diana toured Australia in 1983, the Princess was equipped with a selection of incredible jewels ensuring she dazzled at every function. Let's take a look at some of the items Diana wore to give us a further glimpse into the royal vaults.

The first piece we'll look at is one which needs no introduction for Diana fans. The Art Deco Emerald and Diamond Choker (better known for years as the Cambridge Emerald Choker because it was said it contained sixteen of Queen Mary's Cambridge emeralds; this description has since been altered).

According to The Royal Collection:

'The necklace, set in platinum in the Art Deco style, was made for Queen Mary by Garrard in 1921 using the emeralds and diamonds from a necklace presented to The Queen in December 1911 by the Maharanee of Patiala on behalf of the ladies of India to mark the first visit to India by a British-Queen empress.'


The necklace was inherited by The Queen who gave it to Diana as a wedding gift. It became one of Diana's signature pieces and many will recall her wearing it as a headband in Australia. Princess Diana was permitted to keep it after the divorce on condition it would be returned to the Royal Family after her death. It would be very interesting to see this piece again; Kate in an emerald choker....it sounds good!


The Queen loaned Diana her Pear Drop Earrings. The striking pair were commissioned from Garrard by Her Majesty and made from family stones.


There was also The King Faisal of Saudi Arabia necklace. Given to The Queen in 1967 by the King, it is designed in a fringe style with baguette cut and brilliant diamonds. It is a stunning statement piece.


Kate may elect to take pieces from The Royal Collection she's already worn including The Queen's diamond chandelier earrings and the sparkling Nizam of Hyderabad necklace the Duchess wore earlier this month at The Portrait Gala. 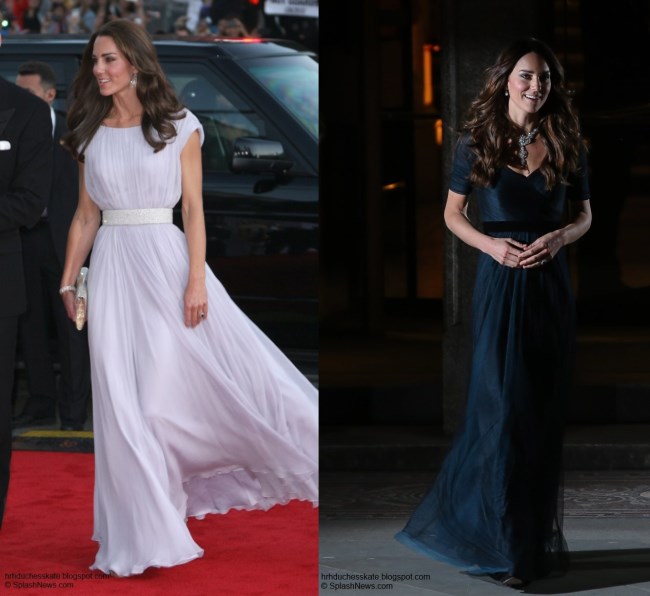 The Duchess will most likely be packing a tiara for the trip. I expect it will be either the Cartier Halo Tiara she wore on her wedding day or The Queen Mother's Papyrus Tiara she wore to the Annual Diplomatic Reception last year. Both are beautiful pieces, although I lean toward the Papyrus. Which do you prefer? 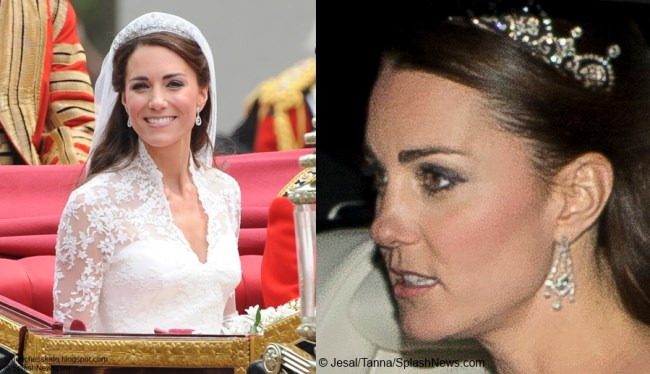 Which jewels featured would you like to see The Duchess of Cambridge wearing?
Posted by Admin at 09:12:00