We have a selection of updates to share today beginning with news the Duchess became a godmother to Oliver and Mel Baker's five-month-old baby son Henry on Sunday at an intimate christening at St Barnabas Church in Mayland, Chelmsford. Kate became mum to George last July and has been "enjoying motherhood" since, so it comes as no surprise she was chosen to guide her friend's son in his spiritual life. Of course, William and Kate chose university pal Oliver Baker to be one of George's godparents, so it's quite nice to see the couple returning the favour and no doubt George and Henry will be playmates throughout the coming years.


Reverend Ken Dunstan who presided over the service shared quite a few details from the event. More from The Express story:

"I think my usual congregation were surprised at who was joining us. My main concern was that I got the tone right for the family and for the baptism. I don't normally pay a huge amount of attention to godparents as long as they are there and willing to make the appropriate promises. She was there as a godmother not a princess.

The couple said they wanted four godparents but weren't quite sure whether one would be available. Then later the father rang me to say the other godmother is available. It's a friend from uni. Then he told me who it was. I got the impression that a number of the congregation had been to the same university."


Prince George joined his parents at the service and was "very well behaved" according to the Reverend. "Prince George was awake the whole time, and the royal couple took turns to hold their son. They got it just right". Security officers were spotted checking out the church's surroundings before the royals appeared. No photos were taken at the event, as it was a very private affair. (With a special thank you to one of our readers who shared details from the christening).

Moving on to fashion updates we've been meaning to share with you for a couple of weeks. With merely weeks left until the tour we thought it a good time to take a look at more possibilities for the Duchess. It is believed Kate will need up to four outfit changes per day and given the duration of the tour (roughly 3.5 weeks), well, we're taking about a considerable number of outfits, even with Kate's penchant for recycling. Let's begin with a brand we saw Kate wear during the South-East Asia tour - Beulah London. The white Sabitri Dress with matching head scarf was voted one of her best tour looks. 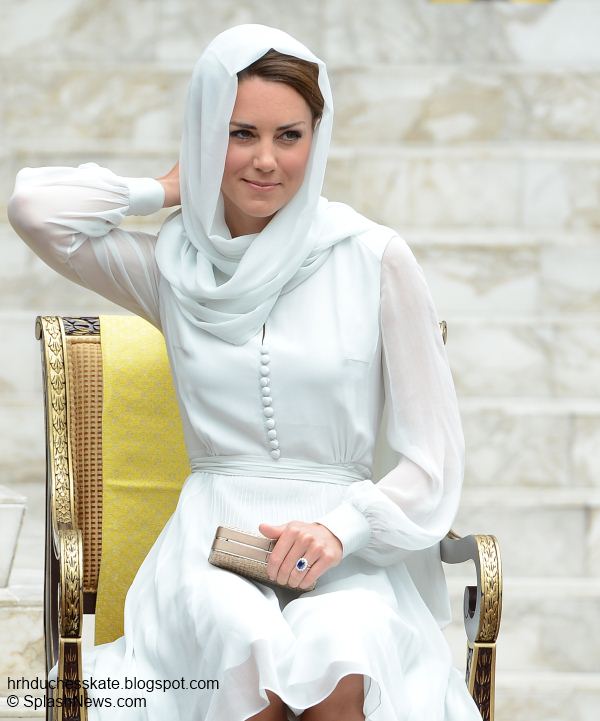 The UK-based label's Spring/Summer 2014 Collection offers an array of pieces which would work very well for the Duchess throughout the tour. Offering a formal sophistication combined with soft feminine colours and floral prints.

Below we look at the incredibly pretty pale blue, off the shoulder Kiku Dress, the Hana Dress, the Lily Dress and the elegant Cameo Jacket.

There's plenty of gorgeous pieces in the collection which would be perfect for Her Royal Highness at evening events, such as formal dinners and receptions, including the backless Porcelain Gown in navy. It also comes in a striking Blossom Print.

We know many of our readers are familiar with The Beulah Trust, partially funded by 10% of the brand's accessory sales. The Trust gives grants that pay for skills courses - giving women who have been victims of sex trafficking and abuse the opportunity to become self-sufficient, independent and, most importantly, free from abuse. The invaluable work the organisation carries out is one of the reasons we were so pleased to see Kate wearing the label - no doubt a component HRH took into consideration herself as she puts a lot of thought into her sartorial choices and the message they convey. If you wish to donate to the trust, you can make a minimum donation of £1.

Jenny Packham's Autumn/Winter 2014 Collection was loosely based on Bianca Jagger. "Not what she wore, but how she wore it. Eclectic, with intelligence and wit," the designer said backstage.


As you'll see, the reference was very much abstract. Instead, Ms. Packham injected Ms. Jagger's eccentricity and sparkle into divine gowns and sequin separates. 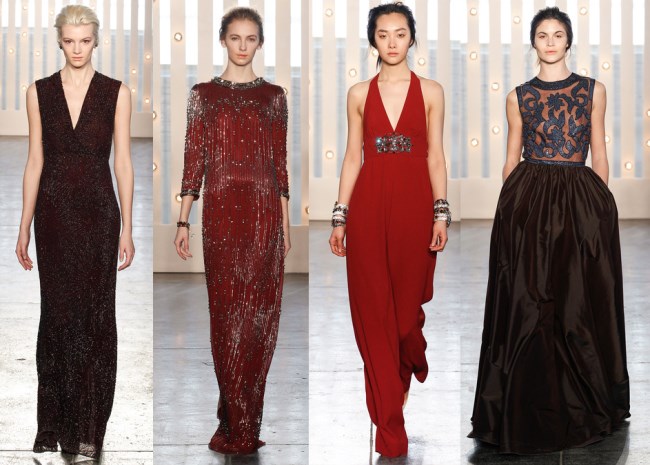 The red gown on the left is unquestionably my favourite garment from the collection. One could envisage the Duchess wearing it with an elegant updo/demi-chignon and the Papyrus tiara she wore to the Annual Diplomatic Reception. This is very much our dream look for Her Royal Highness in 2014! 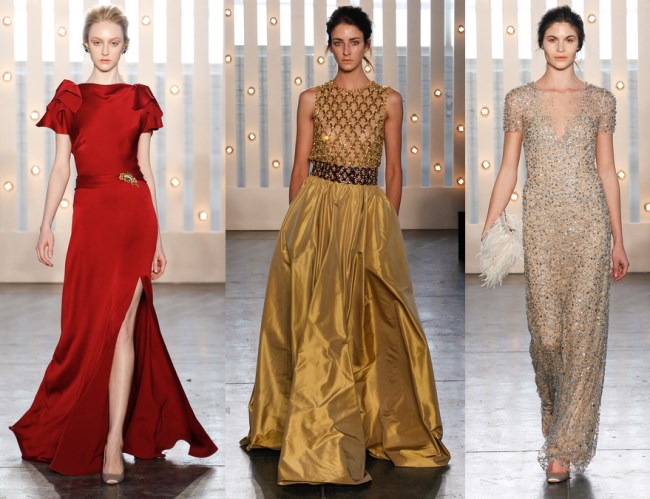 Jenny Packham's designs incorporate a fabulous amount of embellishment, not something many designers can successfully achieve (Jenny and Elie Saab do it best in my opinion). 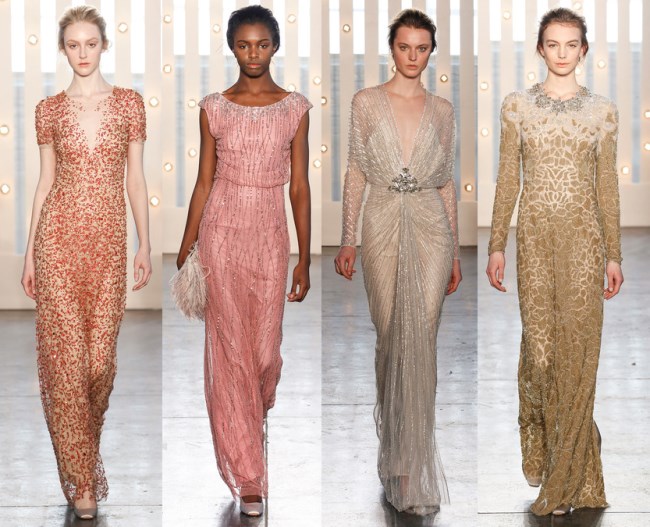 "Daywear" featured in the collection would be more suitably described as cocktail attire. Looks 2 and 3 below are very Kate indeed. Note the white tux jacket thrown over the shoulder is a reference to Bianca Jagger's signature style. Fashion writers and fans all dubbed the collection "What Kate will wear", and no doubt the Duchess was closely watching too, selecting pieces both bespoke and off the rack for her most rigorous tour yet. 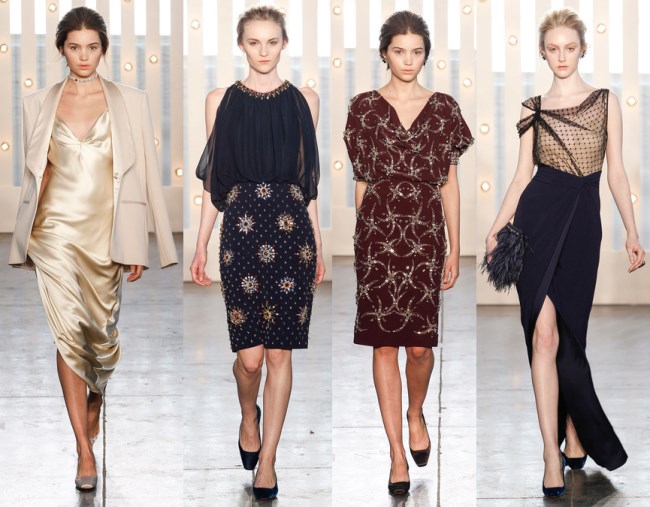 Speaking of Kate's preparation for the tour, the Daily Mail reports the Duchess has turned to one of the late Princess Diana's favourites Catherine Walker. The French-born fashion designer supplied over 1,000 outfits for the Princess including the black dress she was buried in. Ms. Walker tragically passed away in 2010 but her husband has continued to run the fashion house.


More from the Daily Mail's story:

'Kate is most likely to wear Catherine Walker's day dresses - which are the label's area of expertise. But the Duchess will also need show-stopping dresses. And Kate has asked the fashion house to create some bespoke gowns. Kate's mother Carole wore Catherine Walker to the Royal christening and to the Royal wedding, said a Palace insider.

She loves the cut of the clothes and the quality of the fabric. Kate will not be taking a dresser with her, despite the fact that she will be changing as many as four times a day. Another source said, "Catherine Walker is a byword for glamorous, yet conservative and comfortable clothing. The Duchess loves the designs."'


Kate wore Catherine Walker twice during her first royal tour to Canada in 2011. Both looks were considered hits for the Duchess, both in terms of style and appropriateness. I for one, would love to see Kate explore more designers and think this would be a perfect match.


A look at some of the label's latest offerings.


What did you think of the brands featured? Any favourite pieces?

Kate graces the cover of Hello! Magazine this week. The more I see of Kate's L.K. Bennett 'Detroit' dress, the more I like it. It really is a very striking colour.


What's next for Kate? I anticipate we'll hear at least a couple of engagements announced for March, including the annual St. Patrick's Day parade at Aldershot. I'm hearing rumours definitive details including the itinerary for the tour will be released in a couple of weeks at the latest.

Finally, there are so many wonderful aspects to blogging and one of them has been getting to know my fellow Kate bloggers. I did a brief interview with the lovely Trisha from A Petite Princess. The site offers style advice for petite ladies with news and a strong emphasis on charitable works.
Posted by Admin at 06:50:00