We're back with another 'Kate Loves: Jewellery' post. Tonight we're focusing on necklaces, pendants and chains. From what we've seen thus far the Duchess tends to favour several pieces we've seen her bring back time and time again, however, there have been a couple of showstoppers we'll be looking at, too.

After Kate graduated from St. Andrews University she took on a role as an accessories buyer for Junior Jigsaw. During this time she collaborated with talented jewellery designer Claudia Bradby who describes her pieces as 'Jewellery For Living'. The two combined their efforts and one of their designs was The Camellia Necklace, which mixes soft green amazonite with rose quartz. The long sterling silver hoop is versatile and very wearable, and was publicly worn by Kate on several occasions. It's interesting to note Kate's input in the design which very much reflected her taste in jewellery at the time.

It comes in an array of colours and is described this way:

'As seen on Kate Middleton, the classic Lola Rose Medium Open Heart Pendant is a perfect gift for yourself or a loved one. You can feel special in any outfit with this pendant, as the cord can be tied at any length you choose to suit all necklaces.'


In July 2012, Kate and her sister Pippa supported British Number One Andy Murray at the Wimbledon final.


The Duchess looked crisp in a white suit and accessorised with a Gold Plated Acorn Necklace by UK designer Kristin Magnusson. The acorn forms an integral part of the Middleton family crest; it is quite possible it may have been a gift. To complete the look the Duchess added a chain, thought to be a Cassandra Goad piece.


From friends' weddings to royal tours, Kate's Asprey 167 Button Pendant is a versatile and classic piece which has served her well in recent years. 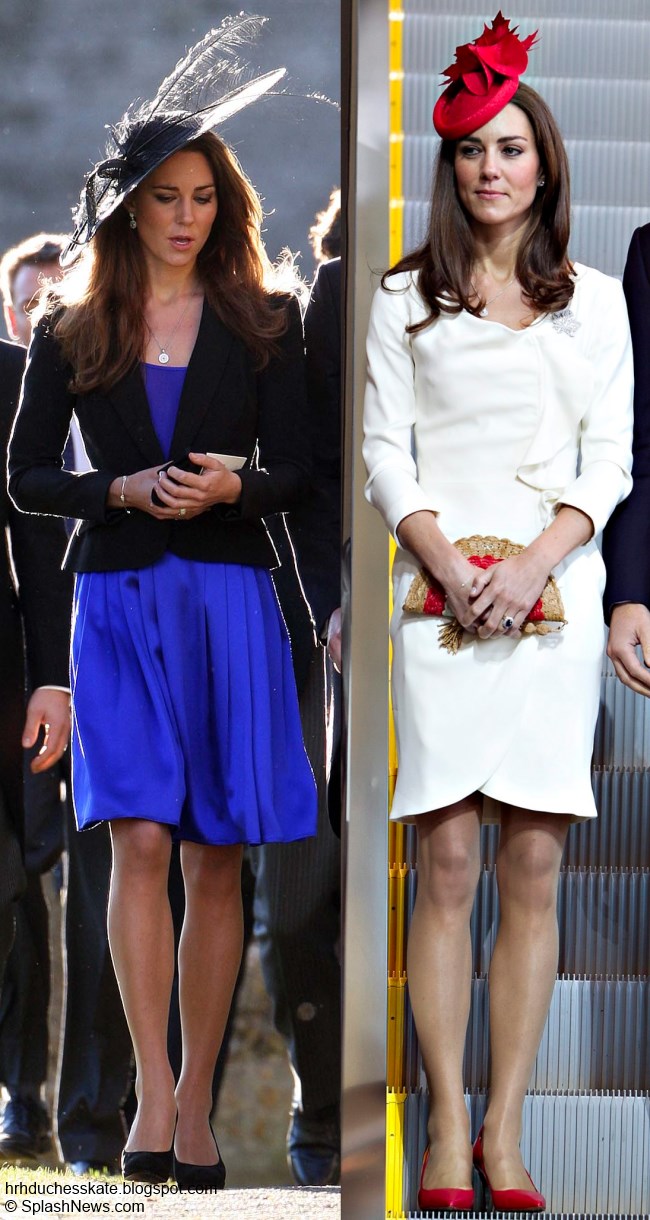 Retailing for $3,750, the pendant has a central amethyst stone surrounded by pavé diamonds all set in 18ct gold.


Kate's diamond cross pendant remains a UFO (Unidentified Fashion Object). It's been in her possession since at least 2005 when she wore it for the wedding of Hugh van Cutsem and Lady Rose Astor. 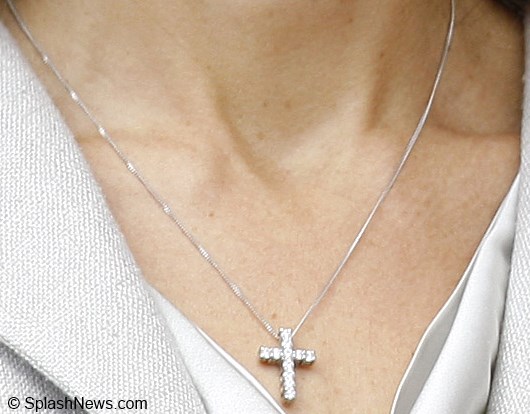 The Duchess wore it to the Order of the Garter ceremony in 2011. 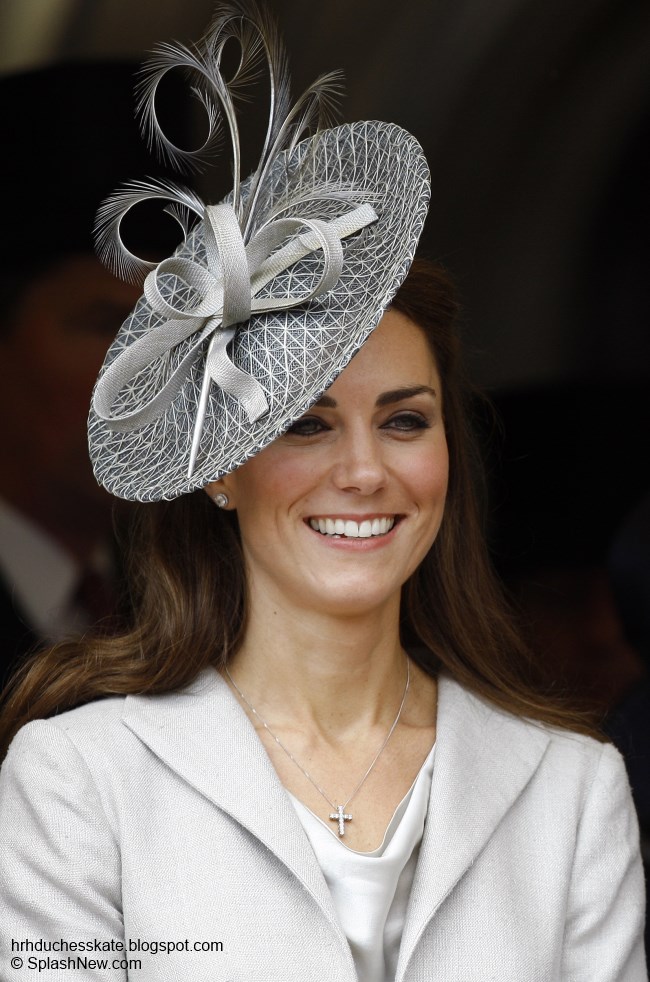 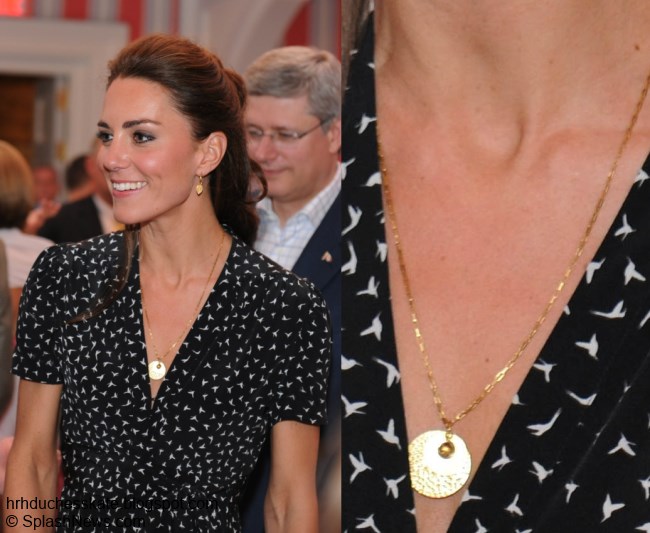 In June 2012, Kate played host to 150 children from her patronage The Art Room at a performance of The Lion, the Witch and the Wardrobe in Kensington Gardens. Kate wore a vibrant blue Zara dress and accessorised with a chain bib necklace with black beads. There were a limited selection of photos available and we haven't had a detailed look at the piece yet, but from what we can see, I must say I do like it. It's a statement piece which works well with brighter hues.


Moving on to those aforementioned showstoppers, beginning with Kate's Cartier Trinity Necklace. In her role as London 2012 ambassador Kate attended an exhibition at the National Portrait Gallery celebrating the road to the games. Undoubtedly, the design of the piece echoed the Olympic rings, however the whopping £49,000 price tag ignited quite the debate. 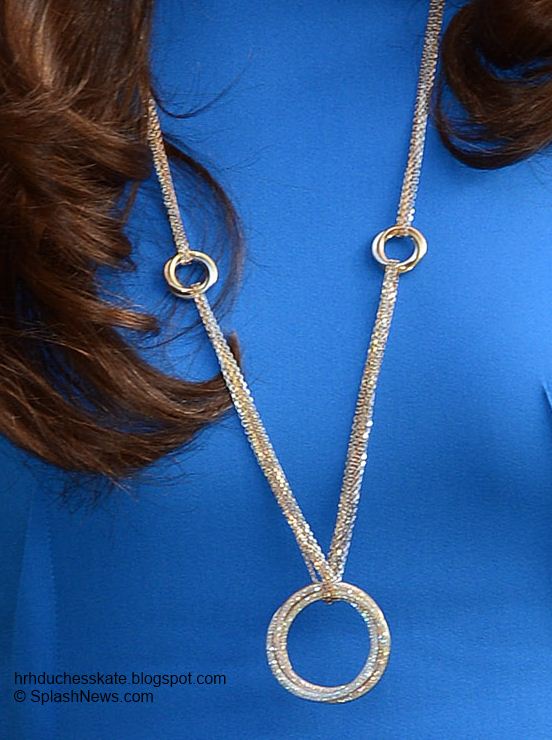 It is described as:

'The pure simplicity of three magically intertwined circles of pink, yellow and white gold; the circles are set with shimmering diamonds.'


Royal aides said the necklace was "from Her Royal Highness's own wardrobe and she thought it appropriate to wear given the Olympic theme". One would imagine it was a gift given the incredibly high price. Aside from the Olympics I cannot imagine Kate will get a vast amount of wear out of it. It doesn't seem a piece particularly suitable for royal engagements nor is does it have the versatility to work very well for evening looks.


When we look back at Kate's style in years to come her appearance at the Sun Military Awards will remain a stand out in my opinion. The fitted black velvet McQueen gown looked beautiful on her not to mention the stunning jewels she chose. 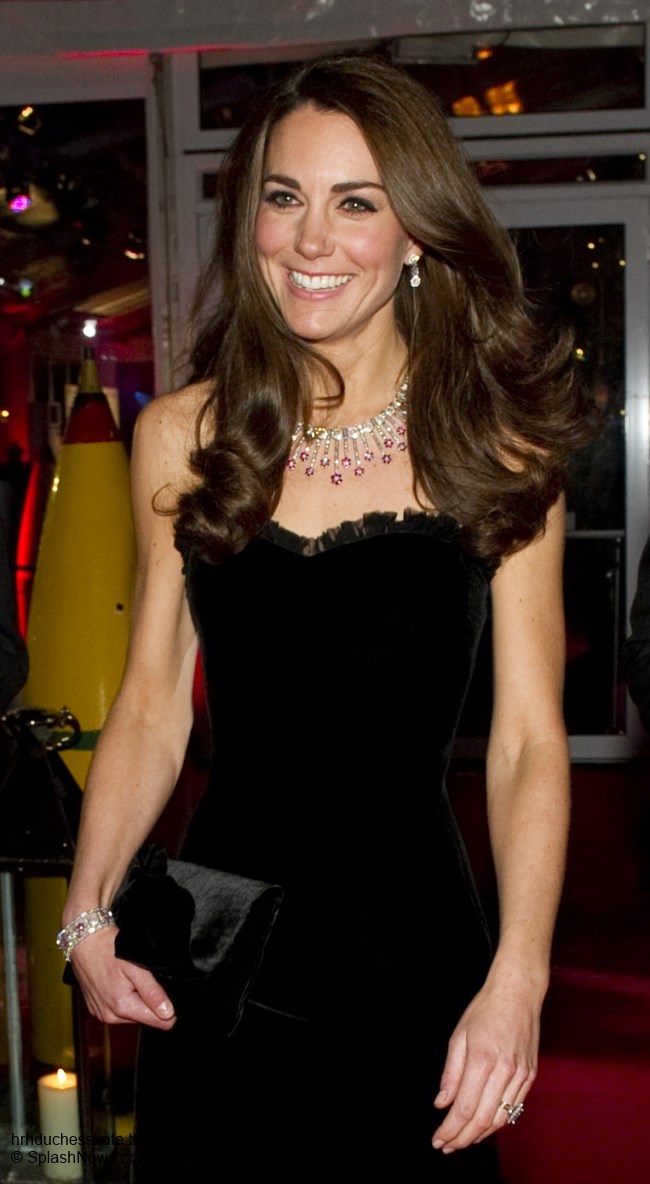 The dazzling ruby and diamond necklace and matching bracelet were a wedding gift from a friend. The necklace very much looks like it is convertible into a tiara, a look I do hope we see in the near future. It was the one and only time we've seen the Duchess draped in such magnificent jewels and she carried the look off with aplomb, looking every inch the Duchess. Fabulous, fabulous jewels. Whoever gifted them to Kate has superb taste, I think you'll agree.


Last month Kate was photographed shopping at Zara wearing a new pendant which is thought to have been a gift to mark the birth of Prince George. If we look closely we can see a little boy figurine and gold discs.


Finally, Kate was gifted garland necklaces made from shell money by locals in Marau. 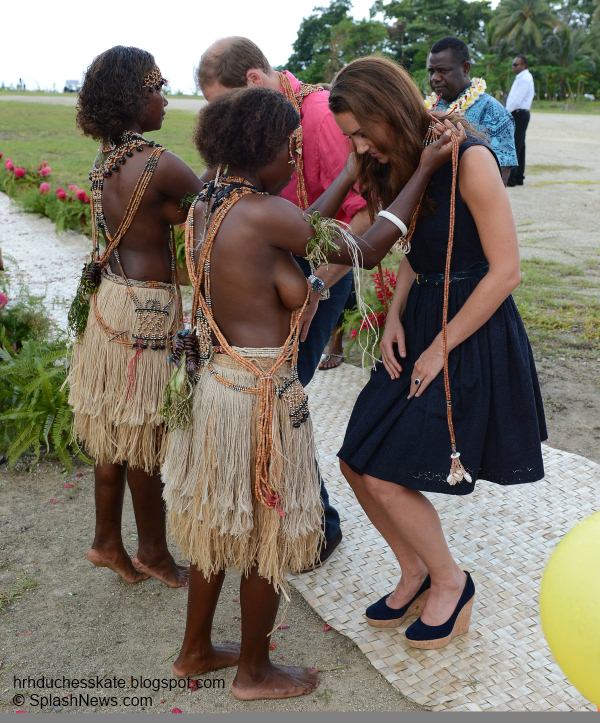 It will be interesting to see Kate's necklace collection grow in the future. Next, we'll be looking at Kate's bracelets, watches and rings before completing our Jewellery series with a prediction post (expect plenty of tiaras).
Posted by Admin at 23:30:00