The Duchess of Cambridge stepped out at a cold and wet Canary Wharf in London this morning to attend a forum meeting for her patronage Place2Be. 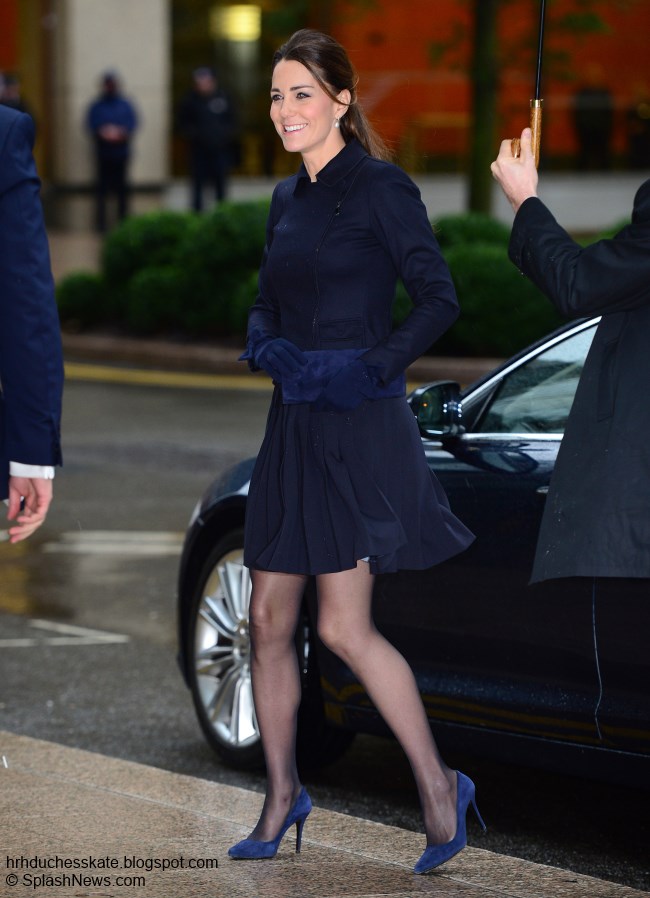 Kate struggled to prevent a 'Marilyn Moment' as she exited the car due to the very blustery conditions in London's Docklands (One can imagine what the headlines will focus in on today). 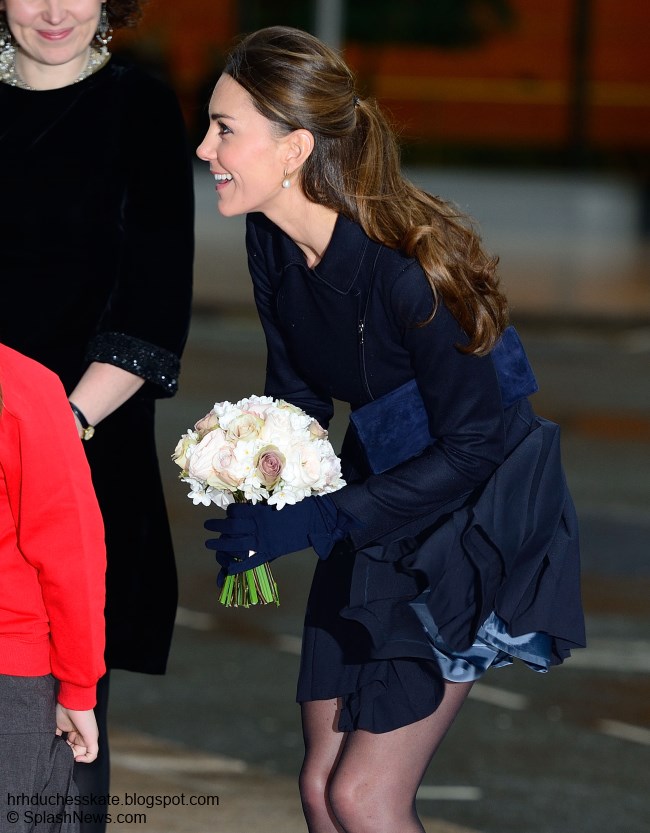 The Duchess was presented with a bouquet of flowers by a little girl. 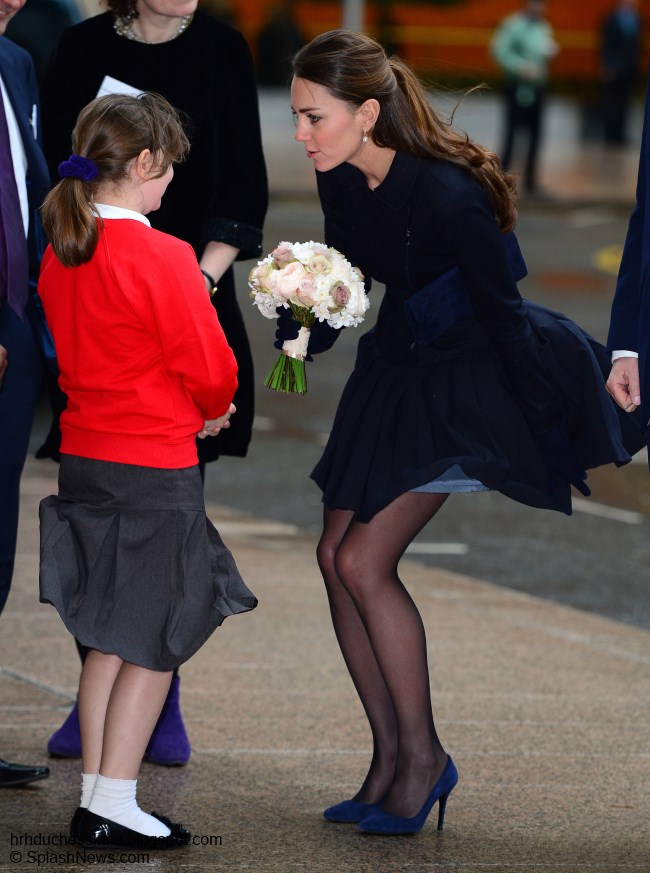 Our go-to photographer, the very talented James Whatling, shared just how cold it was via Twitter.


There was much excitement surrounding today's royal visit. Kate greeted children from a local school upon arrival. 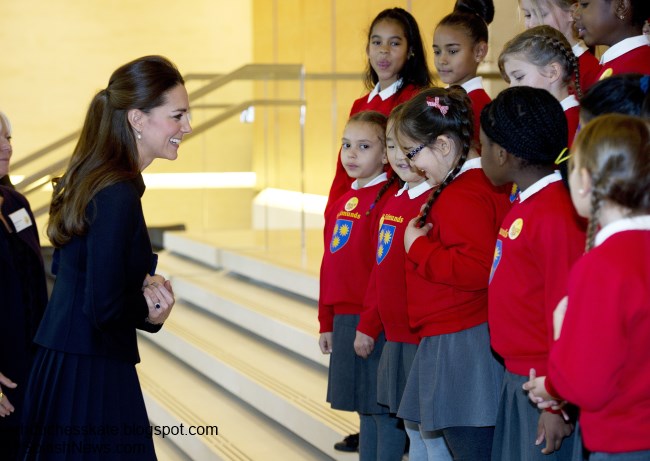 The 'Resilience and Emotional Strength in Schools Forum' was held at the offices of Clifford Chance where the Duchess listened to leading experts, including Professor Tanya Byron and Professor Stephen Scott address some of the key topics that are so pertinent in building children's emotional resilience and strength, including cyber bullying, helping parents make strong, well-adjusted children, self-harm, special education needs today, raising aspirations, access and achievements, and preventing addiction. 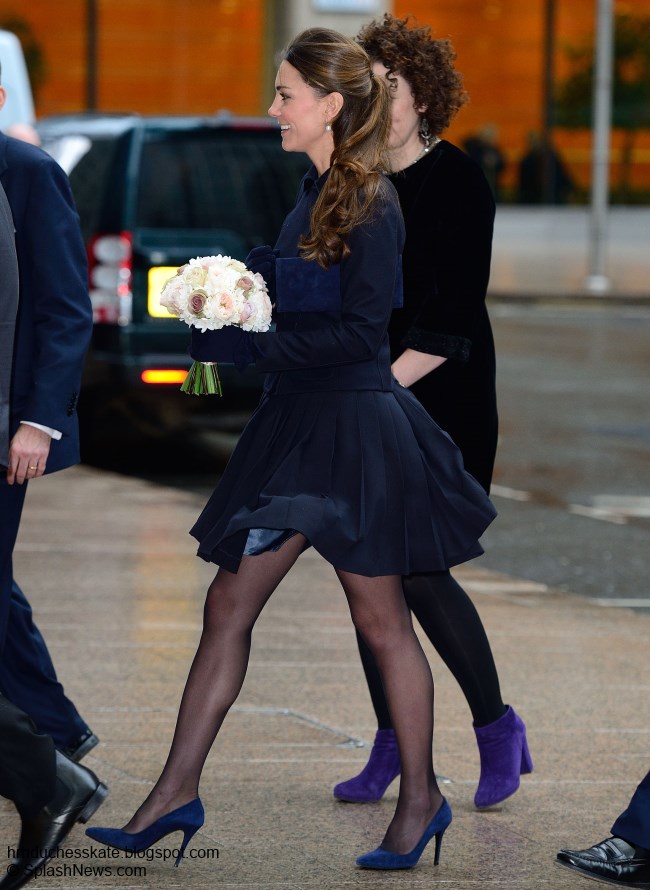 The event brought together experts and leaders from across the health and education sectors, to engage in stimulating dialogue and address these issues collaboratively, to improve attainment and nurture good mental health in children, giving them the opportunity to achieve their full potential. As a new mother, the topics discussed would have been of great interest to Kate.


Kate met the experts, including head teachers and the founder of an addiction treatment centre. 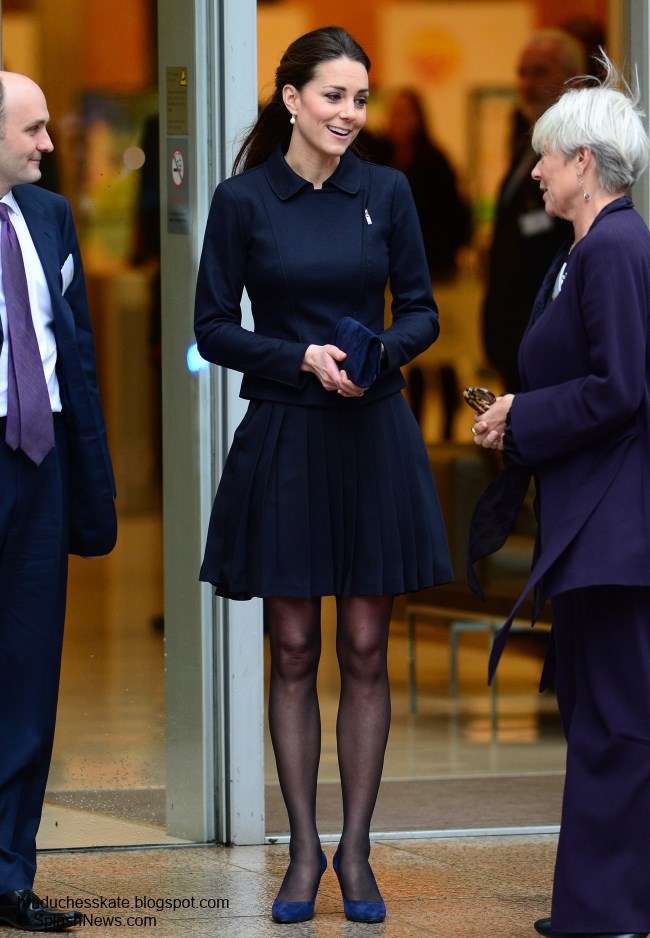 Place2Be is a national charity providing emotional support to children in schools. The organisation works with 200 schools in some of the most deprived areas of the country, helping children aged 4 to 14 cope with not only bullying but bereavement, neglect, violence, family breakdown and other issues. Through their help and intervention the charity aims to steer children away from the downward spiral that can lead to addiction and mental health problems. 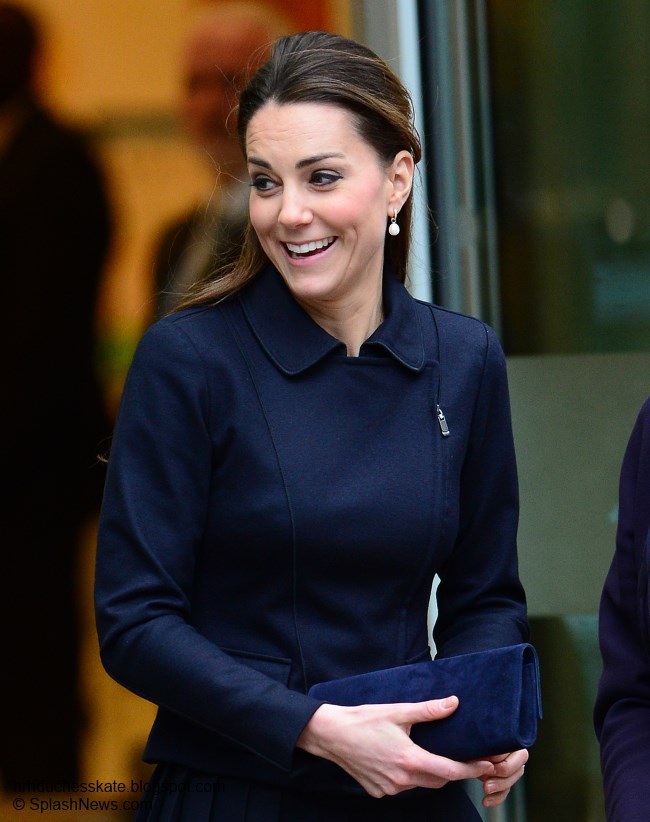 Sadly bullying is such a prevalent problem in our schools. I think it very important for members of the Royal family to support charities like Place2Be and increase awareness where possible.


Kate became patron of the organisation in April 2012, and launched a counselling programme at The Willows Primary School in Manchester the same month.  A spokesman for St James's Palace said at the time it was through her work with Action on Addiction, that the Duchess became interested in the charity rather than any personal experience of bullying (Kate reportedly left Downe House School after two terms because of bullying, moving on to board at Marlborough College). The Duchess's inspiration for choosing the charity came from her belief in increased understanding of the need to intervene early with children.


Has Place2Be been successful in their efforts thus far? I think the statistics speak for themselves.


Benita Refson, chief executive of Place2Be, showed Kate around at the event. She told the Daily Express:

'We truly value her shared passion and commitment to supporting children's mental health. Life can be tough for children for all sorts of reasons - from entrenched issues such as neglect and abuse, through to facing family breakdowns and loss - and it's critical that children have someone to turn to who will listen'.


Kate's jacket is by Max Mara. Ashley Marie emailed the brand and discovered it as piece from their Autumn/Winter 2013 Collection. 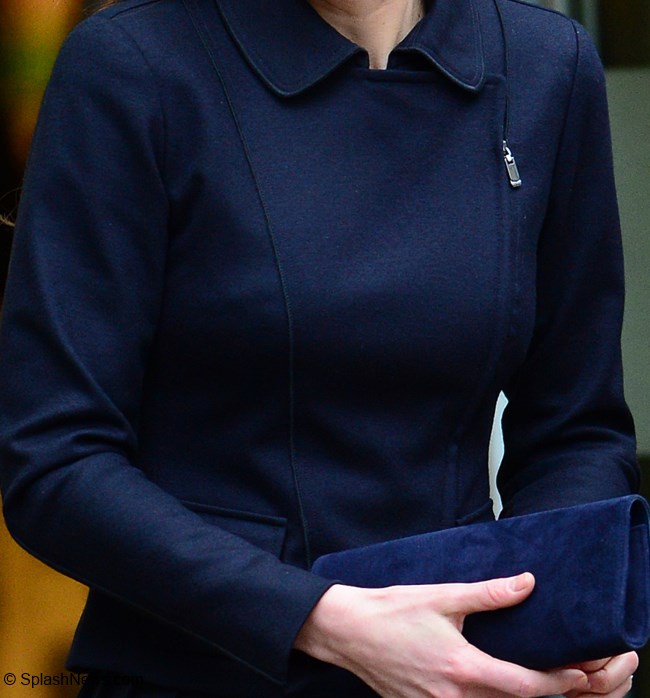 It appears the jacket is a past season piece and currently unavailable to purchase, however a WKW FB reader noted similarities between Kate's jacket and the Max Mara 'Bamby' Ribbed Wool Jacket. It's not identical to Kate's but it's quite close for those wishing to emulate the look. It's on sale at the moment, reduced from €740 to €446 at Nordstrom.


The Duchess chose a garment by versatile Irish designer Orla Kiely for the second consecutive day. The wonderful Anna from My Small Obsessions identified Kate's navy skirt as the Solid Crepe Blend Skirt from the Spring/Summer 2012 Collection. The classic pleated skirt in crepe fabric features pleats all the way around with a button and concealed zip to fasten at centre back. It originally retailed for €150.


The Duchess accessorised with her Annoushka pearls.

The wonderful Anna also identified Kate's watch as Tissot piece, the Swiss firm was founded in 1853 and since 1983 a member of The Swatch Group Ltd. She has worn her gold and silver watch on several occasions. Many of you will have noticed she is wearing a watch much more frequently since George was born. 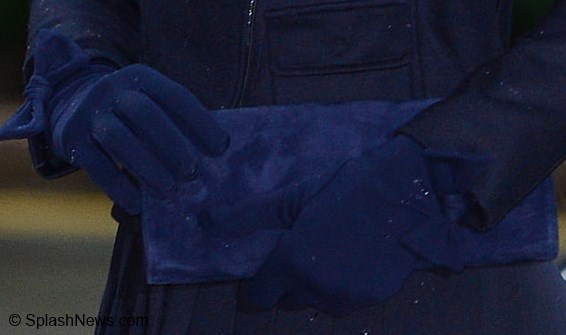 The Duchess selected her navy suede Alexander McQueen shoes to complete the look. 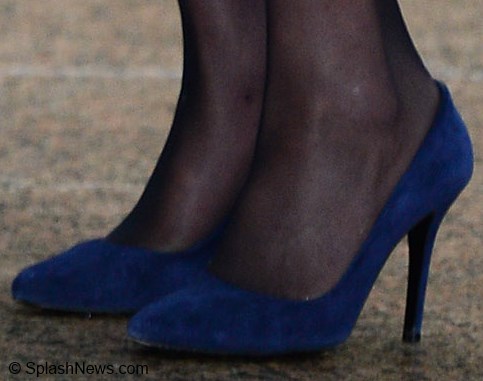 What did you think of Kate's look today? I thought the navy accessories added a lovely touch to the ensemble. It was a youthful choice for the Duchess and it was great to see her wearing her hair differently. The half up-half down style was an excellent choice for her. On a more important note, I was very impressed to hear Kate decided to stay an additional hour to hear about addiction and self-harm. It proves she is dedicated to learning more about her patronages. 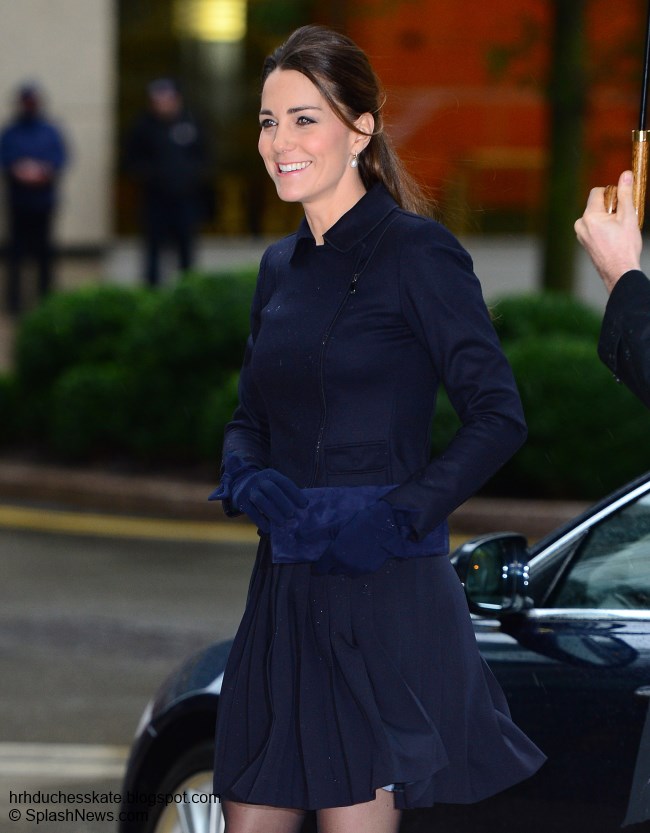 Kate was applauded as she left the building and those at the forum could not praise her enough with comments including "She's very bright", "You can see this means something to her" and "She was very interested in 0 to 5-year-olds particularly". It was a great day for Kate and Place2Be. 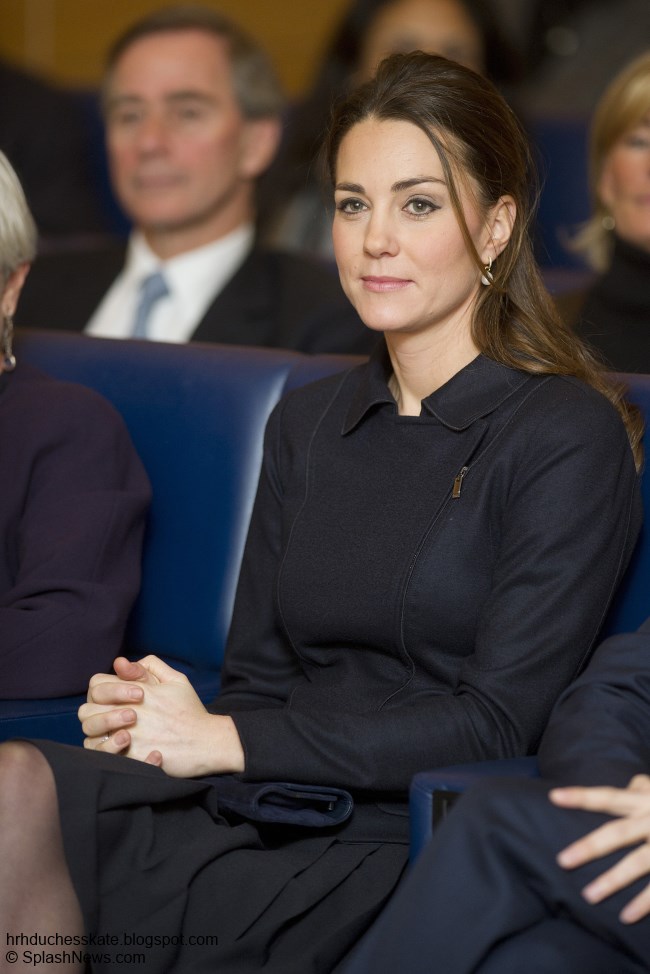 You can view videos at The Telegraph and ITN Source.
Posted by Admin at 11:22:00