I was interested to read an article about Skoki Lodge, set in the deep country of the Lake Louise ski area in Western Canada, in the Banff National Park. During William and Kate's first joint Canada tour in 2011 they spent a night at the lodge, and it provided the couple with an opportunity to take a brief break for themselves, away from the media glare.

I had heard about the couple's visit to the lodge but have never seen a photo until now. The Cambridges posed for a photo before leaving and it appears it's framed at the lodge, as we can see the very distinctive reflection of the photographers face. Kate wore a textured sweater we've seen before and her J Brand jeans.


The Skoki Ski Lodge National Historic Site of Canada was built in 1931 by local members of the Ski Club of the Canadian Rockies. The lodge was the first commercial building made specifically to serve skiers in Canada. Design and construction work was carried out by Earl Spencer (no, not the one we're all familiar with :)) and the lodge was progressively expanded through 1936 by outfitter, guide and log home builder Jim Boyce, who was also managing the lodge at the time. It has remained practically unaltered since then.


During summer months, beautiful alpine flowers paint the landscape, while towering peaks against summer skies welcome you as you make your way through and around Skoki. During Winter, skiers of all abilities can find ski touring and telemarking slopes as well as a variety of cross-country routes around the lodge.


The remote lodge has become even more famous since William and Kate chose it as somewhere to spend the only private time they had during the tour. It is a wonderful place to visit for those who enjoy isolation but there are no flushing toilets, running water, showers, baths or electricity, and there is only one male and female outhouse on site. Reaching them requires a trudge through the snow. This posed something of a problematic situation for royal aides during preparations from the tour.

More from The Mirror's story:

'You can imagine the royal courtiers' stares as the toilet arrangements at Skoki Lodge, in the wilderness of Alberta, Canada, were explained when they were planning the visit.

The only option - obviously - was to airlift in an entire bathroom, with bath, shower, washbasin and flushing toilet. So when William and Kate dropped in during their 2011 tour of Canada to Skoki, the Riverside cabin had an en suite to compliment its wood-burning stove and double bed.'


The Riverside cabin where the Cambridges stayed.


A look at the cabin's bedroom which includes a queen-sized bed.


During their brief stay, the Duke and Duchess enjoyed one of the scenic walks on offer from the lodge and hiked the last third of the trail going into Skoki, going over Deception Pass and down to the beautiful Ptarmigan Lake. There are plenty of opportunities to spot animals during the walk, and no doubt keen photographer Kate captured some snaps with her camera.

The Duchess brought her trusty Canon camera with her and photographed Prince William landing a Sea King helicopter. Prince William had requested the exercise ahead of a day of activities at Prince Edward Island, as Canada is the only country to train its pilots to perform 'waterbird' landings, in which the helicopter's engine is cut before its landed on water. I remember thinking it was a very sweet gesture, that Kate wanted her own personal photos of William's 'waterbird' landing despite the fact the press took hundreds.


Following their walk they enjoyed a hearty dinner back at the lodge consisting of Alberta roast beef  with rich gravy, an assortment of vegetables with potatoes and halibut steaks. Dinner is enjoyed at long candlelit tables which provide a very relaxed atmosphere.


After dinner a glass of Skoki's finest wine can be enjoyed in the reception room by an open fire.


Delicious food and substantial meals are very much the order of the day ensuring skiers and hikers are sufficiently nourished before leaving for the day to enjoy outdoor pursuits. Breakfast includes cereals, pancakes, a choice of egg dishes and fresh bread with homemade jams - something the Duchess would have appreciated. Kate enjoys making her own jam and gave The Queen jars of her homemade strawberry jam and plum reserve for her first Christmas with the royals in 2011. After breakfast, plates of salads, meats and cheeses are laid out so guests can easily take a packed lunch with them.


Prince William enjoyed the food so much he referred to it in the guest book upon departure: 'Fantastic scenery and delicious food, thank you.' While Kate wrote: 'Thank you for looking after us so well!'


Manager Leo Mitzel has fond memories of the royal visit as he was there at the time with his wife Katie and their two children. His six-year-old daughter was particularly excited to meet a real princess, Leo recalled:

'She held her skirt and did a huge curtsey. Kate was very sweet and chatted away to Isabella.

They would have loved a longer walk, if they had the choice. But I think security and time constraints ruled it out for them.'


The couple left the next morning feeling refreshed and went on to complete the remainder of their highly successful first tour, which included plenty of memorable moments. 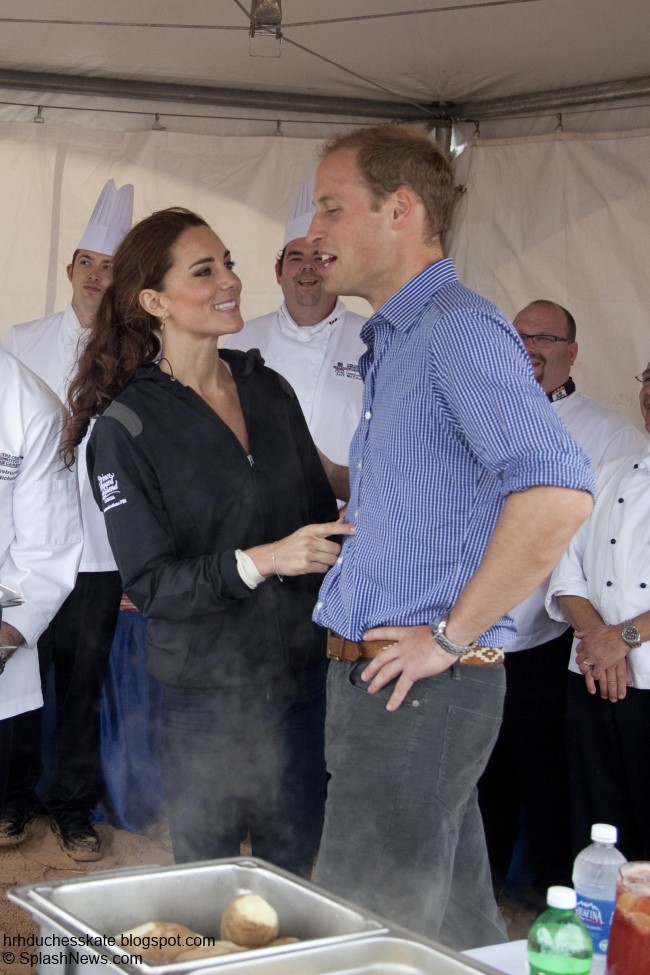 Here are just some of my favourites.


For anyone interested in visiting the royal retreat, you can find information on booking and rates at the Skoki Lodge Website. Summer rates begin at $159 per night whilst winter rates are slightly more expensive, beginning at $209 per night. The winter season runs from December 20 to April.