William and Kate take George to Balmoral, Why George will follow in His Father's Footsteps + London Fashion Week

Hello Duchess Kate readers, I hope your having a great week thus far.

The Duke and Duchess of Cambridge have taken Prince George to Balmoral, the Queen's private highland estate, to meet his great-grandfather Prince Philip. It is believed the couple chartered a private jet, the £14 million Cessna 750, on Sunday which took them from London to Aberdeen, Scotland. The jet was loaned to the Cambridges by the Duke of Westminster and royal sources said the trip "would not cost the taxpayer".


It is thought the trio could stay on the Scottish estate until the end of the week. Charles and Camilla are currently staying at their nearby home, Birkhall and Prince Andrew is reportedly staying there with his daughters, so it is likely to be a very important family occasion for the Royal Family, as they spend time together away from the public glare and particularly special for 92-year-old Prince Philip who will meet little George for the first time.


The royals enjoy the stunning views and spending time in the outdoors during their stay in Scotland.


The visit provides a unique opportunity for rare and historic photos to be taken. For the first time in more than a century, three generations of heirs to the throne are alive. The last time such a photo was taken was in 1894 when Queen Victoria was photographed with her son Edward VII, grandson George V and great grandson Edward VIII. A photo of the Queen with Prince Charles, Prince William and Prince George has been eagerly anticipated since the arrival of the little prince. It is not known when and if the photo will be made public, but undoubtedly it will be a very important one for the family collection. We will see official portraits of Prince George around the time of his christening, believed to be sometime next month.

Over the past three years we have heard stories about William and Kate's Anglesey retreat, and now the Cambridges' time there has come to an end, there will soon be a chance to live like the royal couple when their secluded farmhouse is made available to rent.

More from The Telegraph story:

'Not only will tenants sleep in the same bedroom and cook in the same kitchen as the couple, they are likely to have the opportunity to meet them in person.

The Duke announced last week that he was quitting full-time military duties. He and the Duchess will shortly move into their lavish apartments at Kensington Palace. The couple are said to have enjoyed living in the modest whitewashed cottage near William's base at RAF Valley so much that they will return to visit for holidays.'


A photo of the farmhouse has been made public and the press have revealed the farmhouse is located in an isolated part of Anglesey and can only be reached by a private lane.


Did you all watch the Prince William: New Father, New Hope documentary? For those of you who missed it, it isn't available in full on YouTube just yet, but it was a fascinating watch. I particularly liked the emphasis on conservation and the work of Tusk Trust, it was a wonderful opportunity to highlight the vulnerability of endangered species and the importance of acting now rather than later to protect them. 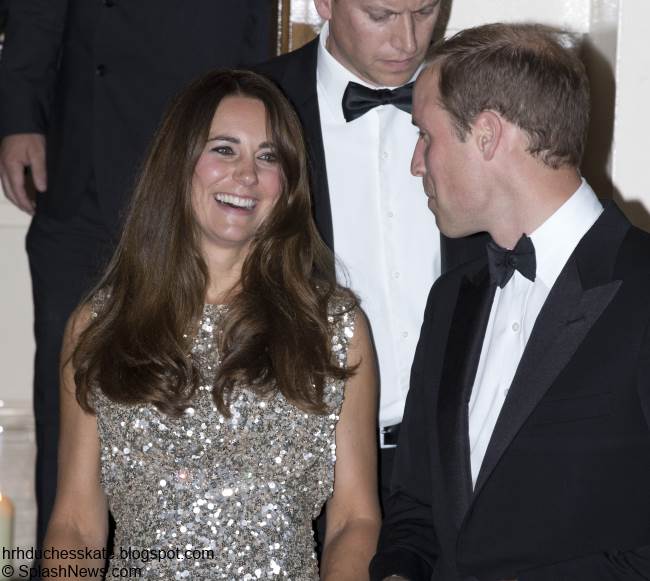 The documentary shared a clip of Kate chatting with a guest at the Tusk Conservation Awards. More from The Telegraph.

'When asked about conservation by a dinner guest, the Duchess replied: "I'm just learning all the time and I think George will be too. I think he'll be following in his father's footsteps.'


We'll share a link to the documentary when it becomes available.

A selection of Kate's favourite designers have been debuting their Spring 2014 Collections at London Fashion Week. I was interested to see Emilia Wickstead's offerings. I've always admired her designs and she has produced some stellar pieces, such as this green coatdress Kate wore on St. Patrick's Day. 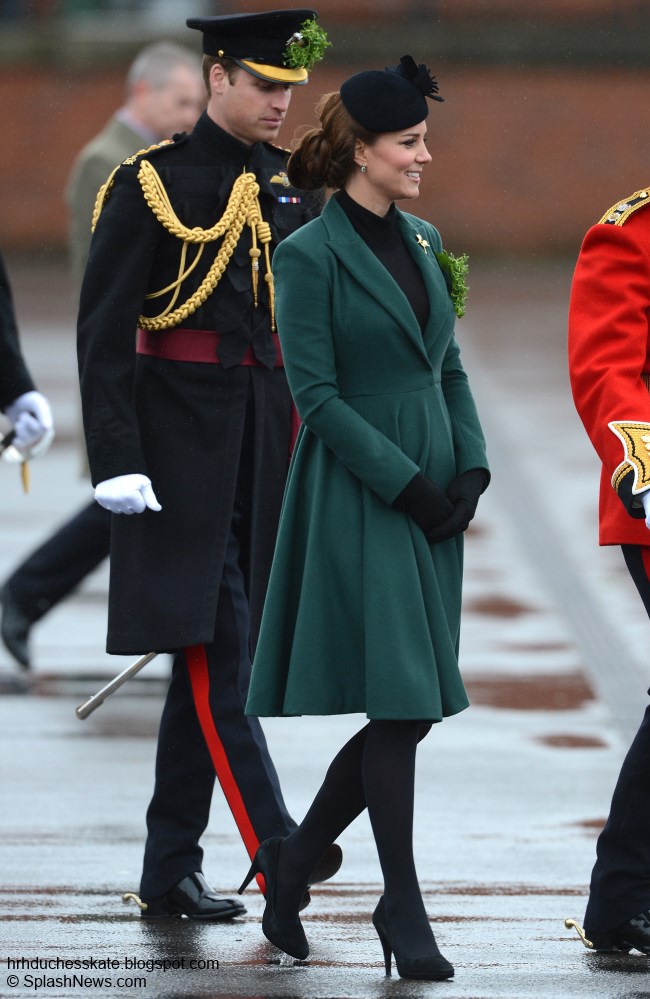 There have been pieces that didn't quite hit the mark too. 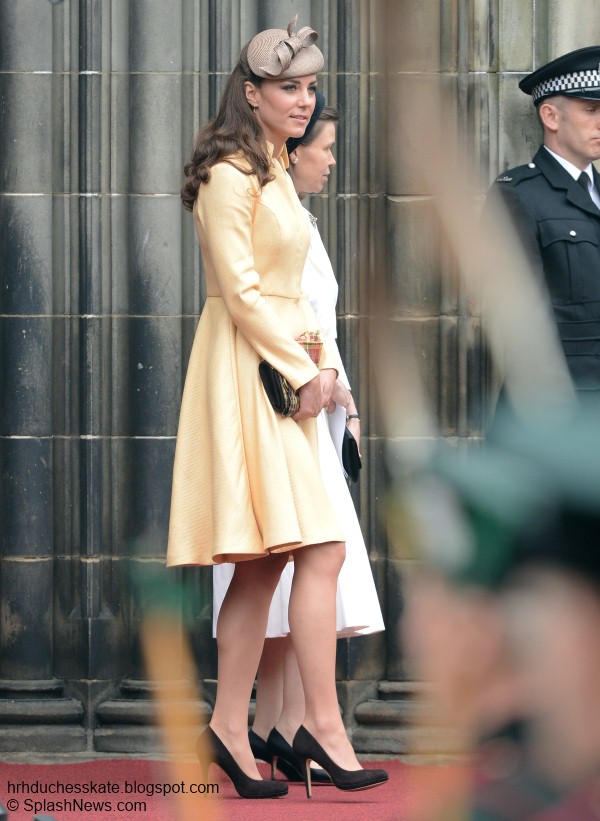 What did Ms. Wickstead showcase at London Fashion Week? The designer did what she does best, encompassing ladylike elegance in her timeless designs. The collection has been described as a 'masterclass in summer dressing' with a selection of possibilities for the label's biggest fans, the Prime Minister's wife Samantha Cameron and of course, the Duchess of Cambridge.

Like the Duchess, Emilia Wickstead has also recently had a baby, which may have inspired her more forgiving silhouettes.

Wickstead said she was inspired by the Memphis blues this season, and there were strains of Dusty Springfield's 'Son of a preacher man' on the speakers as the models took to the runway. All in all, a pretty collection and the designer stayed true to her charming aesthetic.

Moving on to another British designer favoured by the Duchess: the incredibly talented Alice Temperley.

Ms. Temperley drew inspiration for her Spring Collection from a holiday in Sicily. Key pieces include trapeze shapes and a new way to deliver a bolero jacket, with sleeves that were structured yet flowing. Signature floral prints, exquisite embroidery and crystal embellishments added a layer of richness to the collection, a signature of the designer.

Jenny Packham showcased her Spring Collection at New York Fashion Week. It was inspired by the young women of  1975 Australian cult flick Picnic At Hanging Rock (I'm always surprised by designers' muses). Ms Packham said: "Our mood board was already together, and it reminded us of the film. It just had the right feeling."

'Shimmering dresses dripping with pearls on her catwalk, the spectacular Christina Hendricks on her front row, spots, beads and floral studs cascaded in abundance.

The Duchess of Cambridge is just the most famous in a growing Packham customer-base, who cherish her emphasis on prettiness over provocation.'


Jenny Packham spoke of the moment she heard Kate had chosen her polka dot print dress when she emerged from the Lindo Wing with Prince George: "It was amazing, really exciting." With pieces like these, I think it's safe to say we'll be seeing Kate in plenty of Packham in 2014.

Kate graces the cover of Hello! Magazine this week. I briefly read through it this evening and it mentions the Duchess's plans to join a scout group in London.