The much anticipated first official photos of Prince George of Cambridge were released by Kensington Palace tonight.


As previously reported, William and Kate decided to break with tradition by releasing candid images of their son taken at the Middleton family home in Bucklebury, Berkshire in place of an official portrait taken at the Palace. Indeed, the couple opted to forego the services of a professional royal photographer, choosing family photos taken by new gradnfather Michael Middleton.

A Palace insider told the Mail on Sunday the Duke and Duchess felt family photos were more "natural and better convey a sense of family spirit, far more intimate than any taken by a family photographer". The Cambridges chose to spend their first precious weeks with Baby George and the Middleton family, allowing for a relaxed, family atmosphere which provided the perfect backdrop for beautiful photos of the Cambridge family. The "natural" look William and Kate were hoping to achieve is very much evident in each picture.


In the second shot William, Kate and George are joined by their cocker spaniel Lupo and the Middleton family's golden retriever Tilly.


The photos in a different light.


Many media outlets chose to use this version. Which lighting do you prefer?


The first official photos are not only very special but of historical significance. As Prince George is a future monarch they will be documented and referred to time and time again, so it is obvious a great deal of thought went into the details. At George's christening, which is expected to take place in the autumn, we will see formal photographs, so I must say I absolutely agree with William and Kate's decision to choose relaxed family shots taken in the garden. They look like an incredibly happy family, it's wonderful to see.

The official photos made the cover of several of today's newspapers.


A look at The Telegraph and The Scotsman.


To celebrate the arrival of the latest addition to the Royal Family, the Royal Collection have released a series of previously unseen images of the Queen as a child. My personal favourite is a photo of the, then, little princess taken in 1926 when she was just five weeks old - roughly the same age as George is now. The images will be published in a commemorative book later this year.

Kate looked radiant in the Jolene Dress by Séraphine. The Duchess purchased a dozen dresses from the maternity brand earlier this year and has been photographed wearing them in recent months. The fuchsia knot dress retails for £46.


It is described this way:


The Séraphine range is also stocked at John Lewis. The dress was a splendid choice for the relaxed photos, the colour looked beautiful on Kate. She wore her in wavy curls and accessorised with her Annoushka pearl earrings - however, the most noticeable aspect of Kate's look was not what she wore but how happy she looked.


Prince George was wrapped in the Super-Fine Merino Wool Christening Shawl by G.H. Hurt & Son, the same one from St. Mary's Hospital.


Coinciding with release of the photos, a portion of Prince William's CNN interview was released this afternoon. The beaming new father spoke about his first son candidly and how he reminds him of his brother Harry.

'He's a little bit of a rascal. I'll put it that way. He either reminds me of my brother or me when I was younger, I'm not sure, but he's doing very well at the moment. He's growing quite quickly actually. But he's a little fighter - he wriggles around quite lot and he doesn't want to go to sleep that much.'


Speaking about how he felt the moment he appeared on the steps of the Lindo Wing the Prince said:

'I think more shock was the feeling I felt, but I was on such a high anyway, and so was Catherine, about George that really we were happy to show him off to whoever wanted to see him.

As any parent knows, you're only too happy to show off your new child and, you know, proclaim that he is the best looking or the best everything. It's nice that people want to see George - I'm just glad he wasn't screaming his head off the whole way through.

The last few weeks for me have been a very different emotional experience, something I never thought I would feel myself. And I find, again it's only been a short period, but a lot of things affect me differently now.'


Prince William revealed he thinks Kate is doing "a fantastic job" and his family are his number one priority.


It's a lovely interview and William is clearly so happy. He also spoke of how he hopes George continues his conservation work: "I'll have toy elephants and rhinos around the room...lots of bushes..make him grow up as if he's in the bush". You can the video in full at CNN.


Where are the family now? Kate and George travelled to Anglesey via car last week accompanied by Kate's mother Carole Middleton and the Cambridges' housekeeper/cook Antonella Fresolone.

'William was seen out and about with Mrs. Middleton while Kate remained at the isolated farmhouse. Sources said Kate 'just feels safest and most secure' with her family particularly when her husband has to work after paternity leave. She believes that no one could be better placed - or more trusted - to teach her about bringing up a baby than her mother, who has three children of her own.'


It is believed Carole Middleton has returned to Berkshire; William reportedly dropped his mother-in-law at the nearest railway station, Bangor. Kate is incredibly close to her mother and I expect having her there was enormously helpful. William is expected to carry out an engagement in Anglesey before leaving and it is quite possible Kate will join him. 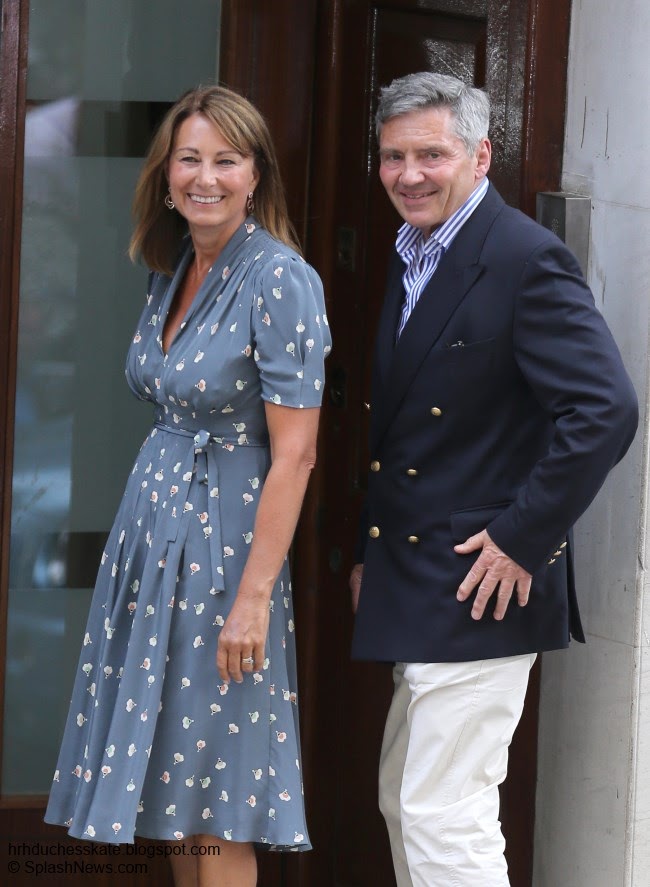 As you may have heard, the snapshots were leaked on Twitter a number of hours ago but out of respect for the embargo requested by the Palace we decided not to publish until after midnight. There was much excitement surrounding the photos and they didn't disappoint. I think amateur photographer Michael Middleton did a fine job capturing the family considering he is not a professional,  it wasn't about perfect lighting or technical perfection, rather sharing a glimpse inside the family's first weeks with George.

Thus far I think it's fair to say there has been a mixed reaction to the photos. What did you all think of them? Do you see any early resemblances? :)
Posted by Admin at 00:03:00