It's Day 16 of Royal Baby Watch and the "Great Kate Wait" (a phrase coined by one of our favourite royal correspondents, Sky's Paul Harrison) continues outside St Mary's Hospital in Paddington, West London.


Photographers, journalists and tv crews have been camped outside the Lindo Wing (quickly becoming known as the Limbo Wing) with some even sleeping outside at night.


With nothing to shoot, publicity seekers such as royal lookalikes are making the most of the wait such as this Prince Harry look-alike who posed for the cameras with a teddy bear.


Those of us who are anxiously waiting were delighted to hear the Duchess of Cornwall speak on the due date during her and Prince Charles's visit to Little Harbour Children's Hospice in Cornwall.


Charles and Camilla are in the West Country for their annual Cornwall Week, meeting locals and visiting charitable organisations. A well wisher and her young daughter spoke with Charles and said, "You've got one of these coming shortly", to which he replied, "hopefully". Thankfully chatty Camilla was much more forthcoming during an impromptu speech:  "We are all just waiting by the telephone. We are hopeful that by the end of the week he or she will be here."

TODAY has an excellent short video with Camilla's speech and a brief interview with royal photographer Arthur Edwards, who reveals he heard the baby is due July 23rd!!


As the Duchess awaits the arrival of her first child, she has made an impassioned plea on behalf of one of her newest patronages Place2Be. The organisation works in schools helping over 75,000 children aged between 4 and 14 with mental issues. In her letter, Kate said: "While I am new to the field, and have much to learn, I strongly believe that the issue of mental health problems for young people has to be tackled."

Next, an interesting piece of information for those who enjoy royal history shared by the BBC's Peter Hunt.

Time for some fashionable distractions to get our minds off Royal Baby Watch!

When Kate stepped off the plan in Canada to begin her first royal tour in 2011 she wore a beautiful navy lace dress by Canadian born designer Erdem; it's very much traditional for royals to wear home grown designers from their host countries but the Duchess obviously loved his designs so much she has worn his garments several times since. Erdem's Resort 2014 Collection is very much in keeping with his signature style.

The designer drew inspiration for the 1960s-style collection, which features fabulous floral prints and delicate embroidery, from his mother's old holiday snaps.

I can see the Duchess in several of these pieces, particularly the white lace dress, far right.

A selection of Erdem's designs are currently available with up to 70% off at Net-A-Porter. Below we look at the Crystal-Embellished Mallory dress, the Helena Printed Silk-Organza Dress, the embroidered Lily, the Iris dress, and the Narissa Lace Top and matching Shawna Pencil Skirt. 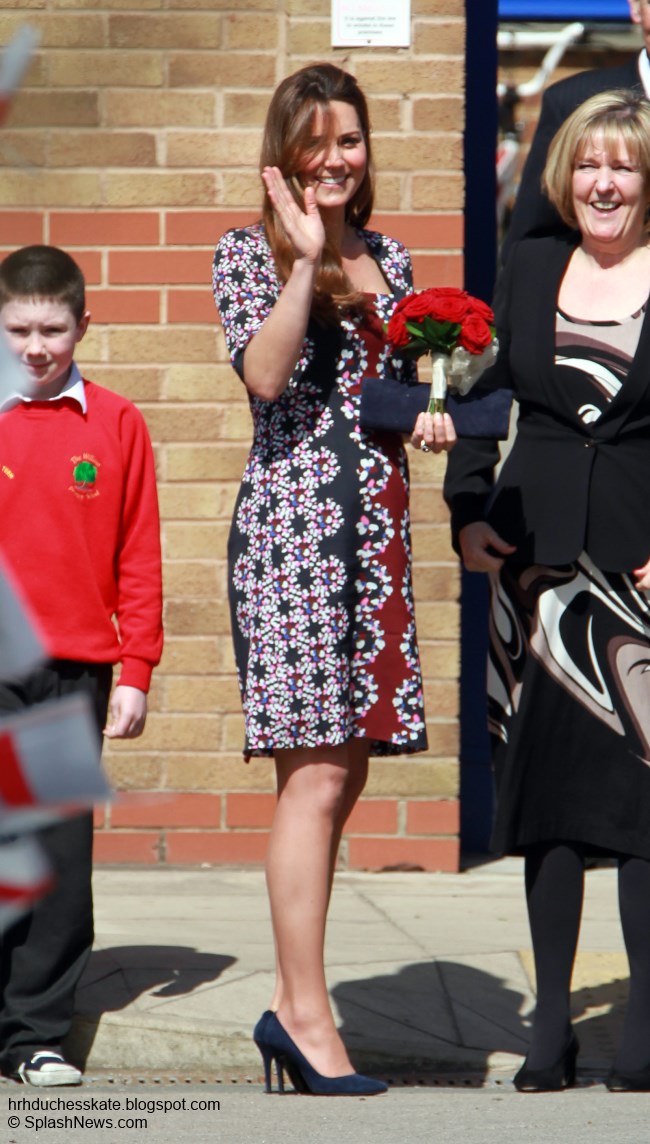 We also look at the latest collection from one of Kate's favoured high street brands: Ted Baker. There is so much to like in the brand's latest offerings. Styles fit for a Duchess include the Aliana Lace Dress, the Bridie Sculpted Pleated Dress (reduced from £129 to £60), the blue Loz Dress and the Bigua Cowl Neck Dress.

There is a significant sale taking place at Ted Baker. A look at garments with up to 50% off.

Hello! Magazine will have a live stream outside St Mary's daily from 6am until Midnight from the moment it is announced Kate has gone into labour. As you know, the Duchess appears on their cover almost weekly and the current edition is no exception!