I've just watched the Wimbledon final (congratulations Andy!) and have been checking for updates on the Duchess, who as an avid tennis fan, quite possibly watched the historic final which saw the incredibly talented Andy Murray become the first British man to take the title in 77 years.


Royal baby fever has truly been in full swing for the past week and we had our first 'false alarm' last night when a tweeter reported her friend, a patient at St Mary's, had heard Kate had arrived at the hospital in labour; however it turned out to be nothing more than a rumour. Needless to say there was quite the flurry of excitement among royal watchers.

I must admit I was wildly mildly excited myself....ahem.


Royal reporters are on tenterhooks awaiting the all important phone call confirming the news we've all been waiting for since December.

The media pens have been organised.

A look at the scene outside the Lindo wing.

Last Friday, a privately chartered helicopter landed near William and Kate's farmhouse in Anglesey, North Wales, where William is currently working as an RAF Search and Rescue pilot. The 175 mph Sikorsky S-76c chopper remains on standby to rush William to Kate's side in under two hours.


More from the The Mirror:

'William will want to fly because it avoids any traffic snarl-ups or train delays. He's promised Kate he will be there. It just shows how serious he is about being a modern father. William has vowed to "move heaven and earth" to be with his wife when she has their child in the private Lindo wing of St Mary's Hospital.'


As the speculative July 13th date approaches one of William's colleagues has been lined up to take over his shifts as he expects to have very little notice when the big moment arrives. Contingency plans are in place in case bad weather grounds the helicopter. A Palace spokesman confirmed train and road were still being considered. Meanwhile, the Duchess has been staying with her parents in Bucklebury, Berkshire. If there is an emergency she will be taken to the hospital via ambulance or even air ambulance but she hopes to make the journey to St Mary's by car.

Meanwhile, staff at St Mary's are preparing for 'EVENT SO601867' (the birth of Baby Cambridge) with staff determined to keep updates as secretive as possible referring to the Duchess as "their special client". The front windows have been hastily frosted and last Monday, Kate made a visit for a private check up - somehow managing to evade the photographers' lenses and camera crews camped out outside.


Kate's gynaecologist Marcus Setchell is on standby and hasn't touched a drop of alcohol in weeks in preparation for the big arrival. The 70-year-old has joked that he might return from retirement to deliver William and Kate's other children!

There are a number of interesting articles in the press at the moment well worth reading including A regal chance to prove working and babies DO mix:

'By showing her face in public, Kate will effectively be working in the family business. And by doing so, she will be sending a powerful message that women don't have to have a year's maternity leave if they don't want to after having children. It will prove that women in business don't have to face a glass ceiling because potential employers fear the disruption that long-term maternity leave would bring.'


I particularly enjoyed The Telegraph's: Kate can be a model of modern motherhood:

'If you could ask the Duchess of Cambridge her hopes for her first child, I'd bet a Royal Mint silver penny her answer would match Diana's for her oldest son: "The one thing his father and I absolutely agreed on was that William would have as normal an upbringing as possible".'


Speaking of silver pennies, babies born on the same day as Baby Cambridge will receive a lucky silver penny the Royal Mint announced earlier this week. An average of 1,983 children are born in the UK each day, so 2,013 of the commemorative coins have been struck to ensure there are enough. The coins are worth £28 but parents can obtain one free by registering their child's birth on the Royal  Mint's Facebook Page.

'The Duke and Duchess of Cambridge can look forward to taking their baby to his or her first wedding: their friend Lucy Meade is engaged. Lucy, who attended the royal wedding, is to marry Charlie Budgett, a bloodstock agent.'


Now, it's simply a matter of waiting. We'll see William and Kate with their little one very soon :) 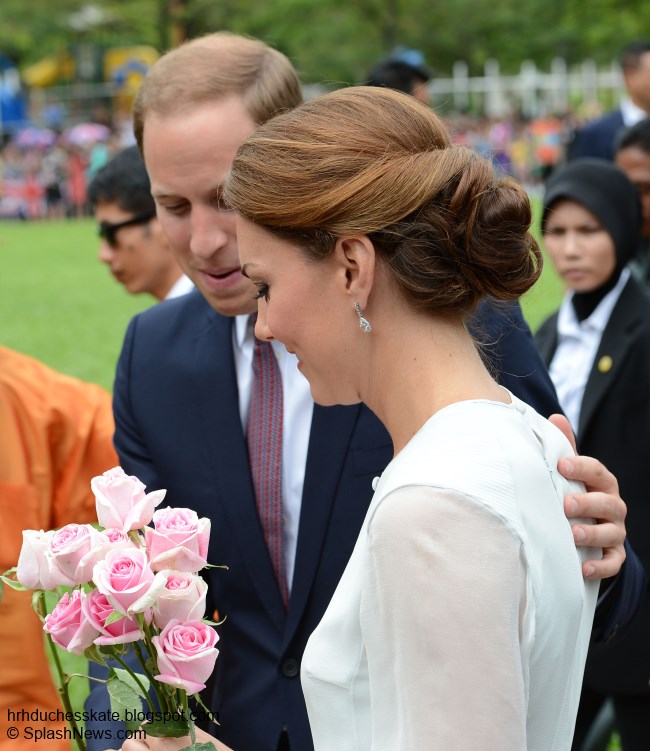 Share your thoughts and excitement by commenting!
Posted by Admin at 18:36:00

4 February - The Duke and Duchess of Cambridge will travel to the Mumbles and Port Talbot to visit organisations and businesses at the heart of the local communities. The Duke and Duchess will visit Tata Steel in Port Talbot to meet with employees and their families at the UK’s largest steel plant. Their last engagement of the day will be to the Bulldogs Development Centre.