New photos of the Duchess appear on the cover of this weeks Australian WHO Magazine (with many thanks to British Royals and What Kate Wore for kindly sharing details from the article). You can see the rest of the photos here.


The photos, taken on June 19th, show the Duchess going to the Rossano Ferretti Hair Spa in Mayfair, Kate is normally photographed at the Richard Ward salon, perhaps she changed? Both Carole and Pippa Middleton have had their hair done at Rossano Ferretti who opened his London salon earlier last year. After doing hair at catwalk shows for Armani and Dior, he spent the last two decades perfecting the art of the haircut. His celebrity clients include Angelina Jolie and Salma Hayek.

'Rossano Ferretti uses The Method - his own patented technique for cutting hair. It pays particular attention to the way your hair falls, its structure and texture, rather than cutting it into a particular shape and and styling it into place. The idea is your cut is subtly carved into your character and uniquely flattering.'


A look inside Mr Ferretti's London base, a beautiful townhouse. He owns salons all over the world including L.A., New York, Mumbai, Rome, Vienna, and Paris.


Rossano Ferretti on his unique style:

'I was obsessed with the idea of creating a haircut that made a woman's life easier, that would work with any kind of hair. So I developed a new technique. I had to break the rules. I realised I had to move myself around the hair, not stand there like a pillar.'


It would be very interesting to see how Kate's glossy locks looked after spending 3 hours with the famous hairstylist. A typical cut and blow dry at the salon would set you back £200.

Maternity brand Séraphine have confirmed the Duchess wore their White Maxi Skirt. The £39 piece is 100% cotton and can also be worn as a dress.

The Duchess carried an old Russell and Bromley bag (with thanks to Ashley Marie).

Is anyone else on tenterhooks awaiting news Kate has gone into labour? :)

We know the Duchess said in April that Baby Cambridge is due "around mid-July but babies have their own agenda". Nonetheless, the royal community is preparing for any date with royal correspondents sleeping with their phone on and getting very little rest. There's a real sense of excitement and occasion surrounding the birth of a future monarch and it only happens every few decades so it is indeed very special. 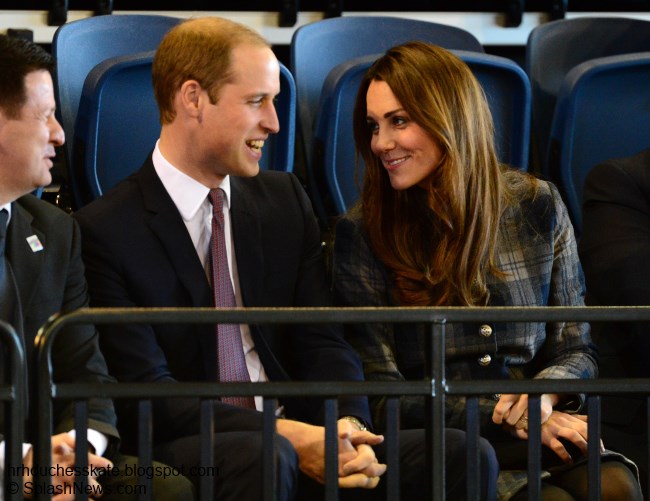 I know many of you are hoping Baby Cambridge is born on July 1st - the late Princess Diana's birthday. It might seem too early a date, however according to some experts the baby could be due ten days earlier than previously thought.

More from The Telegraph article:

'Some have suggested that the Duchess may be due earlier than the July 13 date announced by Buckingham Palace but have kept the true date a secret, much like Princess Diana. Princess Diana had fooled press by telling them her first baby was due on her birthday, July 1. William arrived ten days earlier, on June 21.'


It certainly does seem possible, as the July 13 date being used in the press is merely speculative - the Palace never confirmed it. Whenever Baby Cambridge does arrive; one thing is for sure it will be celebrated around the world. It is, the Washington Post declared, "the world's most famous baby" - the royal birth is likely to generate £260 million worldwide.

Around the globe celebrations have already begun with former Australian Prime Minister Julia Gillard knitting a kangaroo for the new arrival. Ms Gillard, a republican said she thought knitting for the royal baby would be a "cute project to work on".

'Knitted kangaroos, however, are just the tip of the iceberg of international obsession with the new prince or princess. Interest has been piqued by a number of recent royal tours: Kate and William's trips to the Far East and Canada; Harry's US visit in May and the various Diamond Jubilee expeditions all helped to raise the monarchy's profile abroad.

Across the Atlantic, back-to-back media coverage is fuelling interest. This week, the Duchess appears on the cover of almost all the weekly magazines in America. ABC has set up a royal baby guestbook online. Signatories total more than 5,000 with contributions from Kenya, Indonesia and Qatar.'


In Canada, celebrations have been organised nationwide, including a naming party at a naval officers' mess in Ottawa. President of the Monarchist League of Canada said: "We're asking for significant monuments to be lit up in blue or pink, such as Toronto's CN Tower or Niagra Falls. There has been a noticeable surge in Canadian interest in the Royal Family in the last few years."


The Times of India has a section dedicated to Baby Cambridge as do publications in Russia, France, Germany, Italy and Mexico. Philip Benwell, national chairman of the Australian Monarchist League said "Social media is going wild about the event. Women's magazines are all ready to make a huge splash of the royal birth...he or she does not belong only to the United Kingdom but to us as well."

The frenzy is nothing new, though, as Prince William's birth was one of the top-selling magazines of all the time - it was also a global phenomenon.

'I'm so excited I feel like I might go into labour myself. Every time the phone rings I feel sick, in case this is the moment. It's not just me; the whole world is waiting.'


On that note, we share the results of our recent poll asking readers to guess the royal baby's gender. 56% of you think Kate will have a girl. Many thanks to everyone who voted! :) 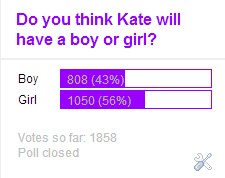 
The main story making the British headlines about the Cambridges is surprisingly not Baby Cambridge but the cost of renovations for their apartment at Kensington Palace. Officials who revealed the royal expenditure earlier this week said around £400,000 had gone on the roof and £600,00 revamping the interior, including asbestos removal.


Sir Alan Reid, Keeper of the Privy Purse said because "funds were tight" the Historic Royal Palaces were not able to make the refurbishments needed but when the apartment was chosen as a home for the Duke and Duchess the work needed to be done. The Cambridges are paying for all furnishings with their private money. The apartment was once Princess Margaret's home and has been used for office and storage space since her death.


The Queen's former press secretary Dickie Arbiter pointed out the apartments have not been touched in over forty years.


What else did the royal expenditure reveal? The royal tour to South-East Asia costs £370,000 and it was also revealed Prince Charles pays £1 million annually to support the Duke, Duchess and Prince Harry in their official duties. William, Kate and Harry employ 10.5 staff and have "no plans" to increase this number, suggesting Prince William will be remaining with the forces in some capacity.

Next, we share a selection of fashion updates. The ever-popular Rhumba Boots by Aquatalia are back due to popular demand.


The $698 weatherproof suede boots have been a staple of Kate's wardrobe for years. The Duchess has teamed them with everything from tartan coats and red suits to jeans and a casual top. The Italian made boots feature a half inside zipper and a slip resistant rubber sole. They're available in black suede and espresso suede at Aquatalia and Lord & Taylor (receive 20% off by using the promo code JULY).


Fans of Emilia Wickstead will be interested to know a number of her designs are significantly reduced at Matches.

Kate's Marella Coat is now available for €770 - a 50% discount. The Duchess wore the summery coat to the Queen's Garden Party in May; it was a lovely choice for the occasion.


We also looked at four MaxMara Studio sale pieces; all very pretty items I could easily see the Duchess in. I anticipate we'll see Kate opting for MaxMara designs quite a bit when she returns to royal duties.

And up to 50% off Alexander McQueen including the Cowl Neck Silk Crepe Dress (Pippa's bridesmaid dress, reduced from €2,394 to €1,196). I must say, I'm not always a fan of McQueen designs but they do tailoring impeccably well.

Before we start enjoying all the fabulous designs on offer for Spring/Summer 2014 I wanted to share a cursory glance at Jenny Packham's AW13 Pre Collection. The garments could have been custom made for Kate and feature stunning embellishment and detailing on the waists.

Jenny Packham's shimmering gowns look fabulous in paler colours but equally well in deeper jewel tones. I'm very much hoping we see the Duchess in a design from this collection at some point.

We leave you with a video of Kate and Pippa which was taken in late 2007 after she and William got back together (with many thanks to British Royals). They were walking home to their Chelsea flat following a night out at Raffles nightclub and were hounded by paparazzi. I'd never seen it until today; it shows just how terribly difficult a life in the public eye is and what a challenging time Kate has had, I think she's handled it all incredibly well. It must have been very intimidating for her, particularly before the engagement. 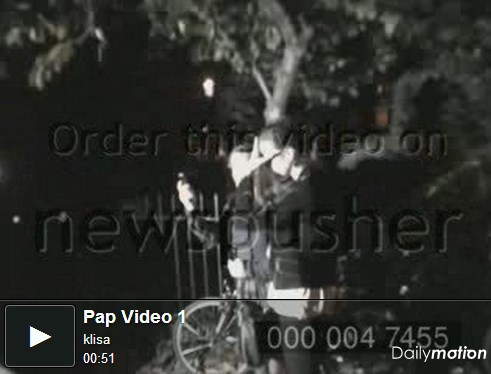 The video is bad quality but if you wish to watch it you can do so here!
Posted by Admin at 15:49:00