The Duke and Duchess of Cambridge visited the offices of Child Bereavement UK, at the charity's headquarters in The Clare Charity Centre in Saunderton, Buckinghamshire. 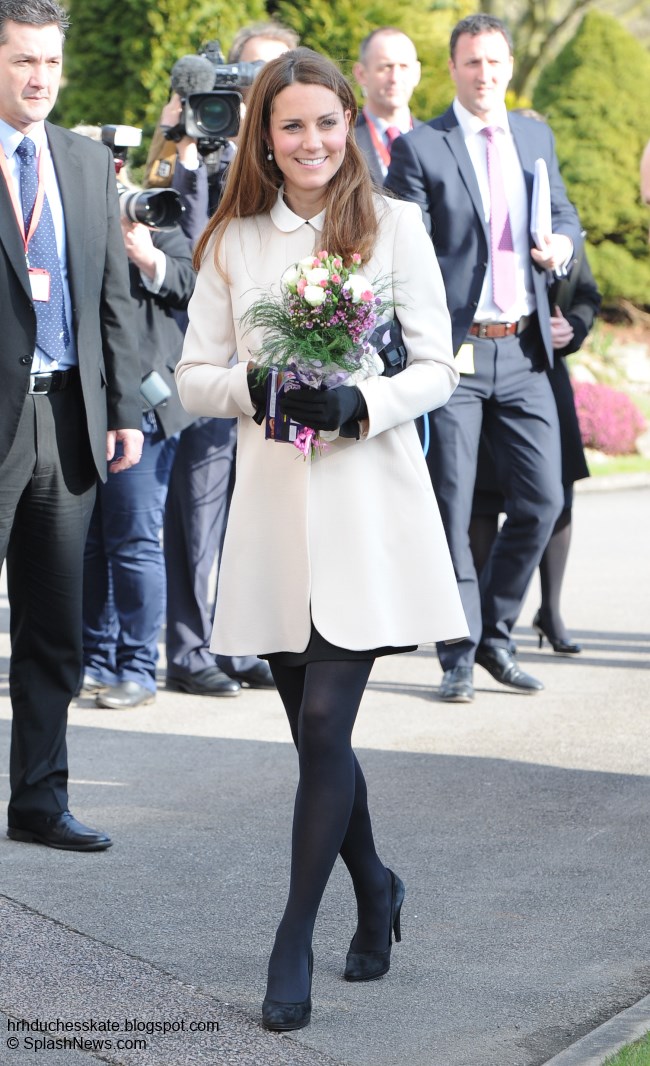 William and Kate chatted to wellwishers outside and were given two teddy bears for the baby. During the walkabout William joked he never gets flowers anymore just cold hands :) 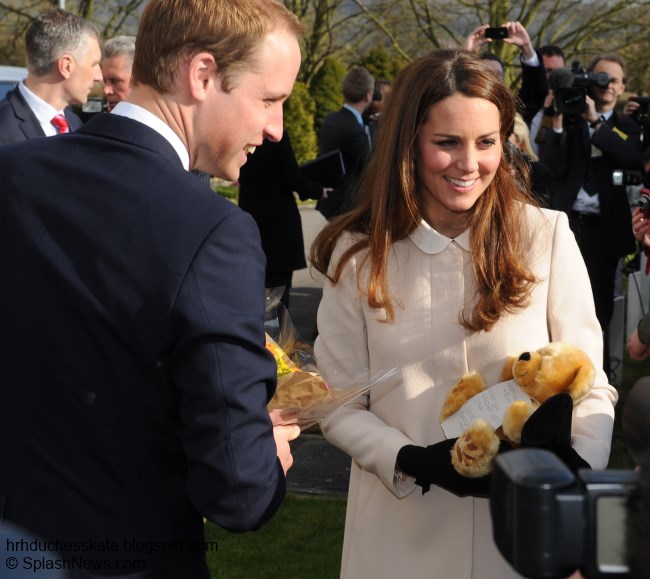 Their Royal Highnesses met staff from the charity's Bereavement Services and Training and Fundraising teams separately before they were introduced to bereaved families involved in the Child and Young People's Service, the Young People's Advisory Group and a Parents' Support Group. It was no doubt a poignant visit for the couple who are expecting their first baby in July.


Sky's Paul Harrison kindly shared photos from the visit including this one of Kate chatting too British food writer and television presenter Mary Berry who is also a patron of Child Bereavement UK. The Duchess told Mary she is "a big fan of her cookbooks and cakes".

Shortly after becoming patron, William spoke candidly about the devastating effects of losing his mother at just fifteen in the hopes of raising awareness of the charity's valuable work:

'Never being able to say the word "Mummy" again in your life sounds like a small thing. However for many, including me, it's now really just a word - hollow and evoking only memories. Initially, there is a sense of profound shock and disbelief that this could even happen to you. Real grief often does not hit home until much later. Life is altered as you know it, and not a day goes past without you thinking about the one you have lost.'


Child Bereavement UK supports families and educates professionals when a baby or child dies or is dying, or a child is facing bereavement. Their vision is for all families to have the support they need to rebuild their lives. Over 5,000 professionals are trained each year to deliver bereavement support. The work of Child Bereavement UK is vital, and as William correctly said, it can take time for "grief to hit home" and children need all the support possible to get through such a devastating time in their lives, as do parents who have gone through the heartbreak of losing a child. I do hope today's visit helps to raise much needed awareness.

There are many ways to support Child Bereavement UK. You can donate or purchase an item from the online shop, such as memory boxes and precious love roses.


Kate shared a pair of earphones with a young boy. I wonder what they were listening to?


The Duke and Duchess helped the children pop bubble wrap much to their delight :)


More from The Mirror's story:

'The white family gave Kate a little Easter bunny and some chocolate.

Hayley Collins congratulated William on the couple's upcoming baby. She said: "He seemed really excited and Kate said "I'm overwhelmed by the number of hands' about the hands being thrust out from the crowd'.


Goat, the label synonymous with understated luxury began as the go-to cashmere range for the fashion cognoscenti over a decade ago. The brand has developed in to a full ready to wear collection encompassing signature knits, dresses and outerwear. Found in over fifty stockists across the UK, Goat is a truly British brand headed up by founder and designer Jane Lewis. Celebrities including Sienna Miller, Gwyneth Paltrow and Victoria Beckham are huge fans of the brand. Could it become a new favourite of Kate's?

Kate teamed her coat with the Topshop Collar Contrast Dress underneath. The prim black shift styled with a Peter Pan collar features a back zip closure. I think the frock worked very well with the coat and together provided a chic but comfortable look and looked lovely on it's own (Kate rarely takes her coat off at engagements). The dress is also available in some sizes at Nordstrom for €68.79.


I thought it a very pretty ensemble for the Duchess, perfect for spring and appropriate for the occasion. Kate has a great talent for mixing designer with high street as she was demonstrated perfectly today. On another note, her hair is getting so long, it looks fantastic. Let us know what you thought of Kate's sartorial choices? 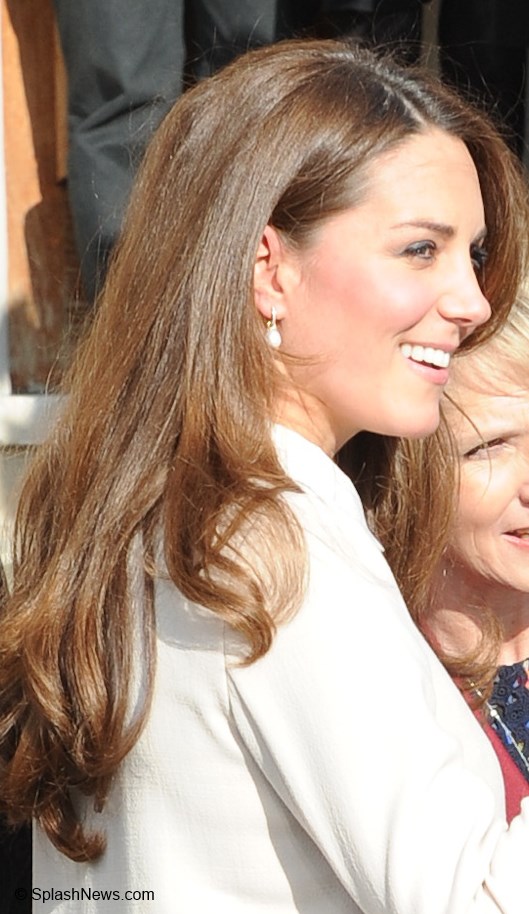 Do take a look at this wonderful article by the Express The Duke and Duchess of Cuddles. Whilst William and Kate were talking with bereaved parents William said "I feel like I should give you all a hug". Each of the mothers and fathers in the group then took it in turns to hug the couple. A very touching visit for the Duke and Duchess (with many thanks to CP).

Yet again Kate graces the cover of Hello! Magazine but this week there's a difference - the Duchess's uncle Gary Goldsmith has given the magazine an exclusive interview. Given Kate's status there is no doubt the deal was a lucrative one for Mr. Goldsmith. The royals value their privacy above all else and it is very rare for a close friend, let alone a family member to give an interview to the press about their connections.


I read the interview this morning (with thanks to my fiancé for popping out very early to pick up a copy :)) The interview and photoshoot took place at his $6 million villa in Ibiza (often referred to as 'Maison De Bang Bang in the press) which is currently on the market. He reveals William loved the villa and enjoyed mud baths there. The photoshoot features a selection of photos of Gary with his 11-year-old daughter Tallulah who Kate "danced around the living room with" when Tallulah was four.

So what does Gary Goldsmith have to say about Kate?

On meeting William at the Middletons' home:

'William was very attentive to Kate. You could see there was something there, they were helping each other - it was almost like hand in glove. They produced the meal for us while we all sat around drinking. It was obvious that things were serious.

'Kate was very low, spending a huge amount of time on the phone, walking around the pool'.

'They are different. Kate works really hard at everything. She is brilliant at whatever she turns her hand to, but works at it, throwing herself into everything. Whereas Pip, everything seems to come very easily. They were both head of sports teams {at school}, but you just know that it was something Kate had strived for -  and you also know that it was just given to Pip because she is a bit brilliant'.


How Kate is coping with her royal role:

'She is so kind hearted - a beautiful girl inside and out. I think that is the Kate people are seeing and the Kate I know. She is this confident, clever, caring girl who has taken her responsibilities in marriage and job incredibly seriously. I think everyone thinks she's sincere, in love and doing her job to the best of her ability.

'Kate's going to make a brilliant mum. She's a very kind hearted girl. You couldn't want for a better kid, and that's going to shine through with her as a parent. Would I play a part in the future monarch's upbringing? Of course I would. And I'd love my daughter to be involved in that. My little princess is massively into the family'.


While Mr Goldsmith only said positive things about his family the interview is being viewed as cashing in on his royal connection with several royal commentators calling it a "betrayal". Former Buckingham Palace spokesperson Dickie Arbiter told the Daily Mail:

'He has sold the family out. He's cooked his goose on this one.'

The Palace refused to comment on whether or not Kate had prior knowledge of the interview, but I cannot imagine the Duchess or the Middleton family is happy about it but given how close the family are, I don't think it will be ultimately very damaging. What are your thoughts? For those of you in the US who wish to purchase the magazine, it's available at Barnes and Noble.

Prince William attended a lunch at the Kennel Club in London yesterday in aid of his latest patronage, the Windsor Greys Jubilee Appeal.


A group of Windsor residents are in the process of raising £200,000 to install a statue of a pair of Her Majesty's Windsor Grey horses on the roundabout at the junction of Kings Road and Albert Road by June next year.


One of the residents leading the campaign, Rosemary Ussher said:

'We are extremely pleased the Duke of Cambridge is on board and we will be planning some events later this year. The appeal is going strong and we are all very confident we will reach the target in time to pay for the first mould to be made.'


Around £25,000 has been raised thus far for the statue which will commemorate the coronation of Queen Elizabeth II in 1953.

Interestingly, the media were not told about the engagement beforehand. Royal reporter Richard Palmer notes this may be a sign of things to come when William becomes a full-time royal.

Next, our fashion tidbit for today. I know some of you are fans of Kate favourite Warehouse clothing. The mid-season sale has arrived with up to 50% off Sale Items. There are several styles in the sale which I thought were 'very Kate' including the Lace Shoulder Batwing Top, the Origami Front Dress, the Paisley Print Dress and the Smock Panel Tunic Dress.

ITV's Our Queen aired on Sunday night. The much publicised landmark documentary painted an in-depth portrait of Her Majesty during the Diamond Jubilee year. Featuring a series of interesting interviews with members of the royal family and a behind-the-scenes look at the life of the Queen. It's an enthralling and fascinating watch. If you haven't seen it already (or wish to see it again), it's available to watch on YouTube channel UK Television USA. 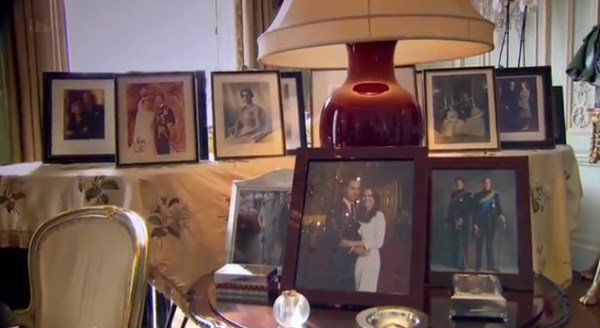 We finish today's packed post with a photo of Kate from the luncheon Sunday kindly shared by @karenengland69 (with many thanks to the eagle-eyed @RoyalKateDebate). We didn't see many photos from inside so it's nice to get a glimpse!