William and Kate kicked off the Christmas festivities with a lunch hosted by the Queen at Buckingham Palace today.


Royal fans waited outside the Palace to catch a glimpse of Kate who arrived with a detective, a few minutes after Prince William who was driven in with Viscount Linley. Sources said it was more than likely because they had come from different venues.


The Queen's pre-Christmas lunch is one of the few occasions where immediate and extended members of the royal family are all gathered together. Guests at the 40-strong lunch included Prince Charles, the Duchess of Cornwall, Prince Edward and the Countess of Wessex, the Duke of York and his daughters, Princess Anne, and the Duke and Duchess of Gloucester. It is the third consecutive year Kate has attended.


Kate and William left smiling in a land rover after two hours.


The Daily Mail story is here and includes more photos including other royals arriving.


Kate appears to have worn the black fringed black coat from the couple's dinner date at Lou Lou's with a burgundy dress and accessorised with her Heavenly Necklaces pearl earrings.

We are still awaiting an announcement from the Palace regarding William and Kate's Christmas plans. I will update the post as soon as it is officially confirmed.

In other news, the Duke and Duchess of Cambridge made a surprise appearance at their staff Christmas party yesterday afternoon. It was an unexpected appearance for the couple who were joined by 27 of their staff at local London restaurant chain Bumpkin in Notting Hill. A St James's Palace spokesman said: 'The Duke and Duchess attended a private luncheon today.' No photos were taken as it was a private event.


It was a low-key affair and guests enjoyed the traditional Christmas Menu which costs £30 for three courses including a turkey dinner with all the trimmings and Christmas pudding for dessert. Mulled wine was served after the meal but naturally Kate stuck to soft drinks.


William and Kate hired a private room for their staff, appropriately called 'The Queen's Room' for its large, framed portrait of Her Majesty. The room is described as an impressive banqueting haven ideal for lunch, dinner parties and cocktail functions.


Bumpkin shared a look at their Christmas table via their Facebook Page.


Those of you who enjoy traditional Christmas pudding will appreciate a look at this :)


A restaurant source said Kate looked the picture of health. More from the Daily Mail story:

'The Duchess of Cambridge was looking the picture of health. William and Kate enjoyed a leisurely lunch with 27 members of their household. Bumpkin is a group of country-in-the-city-style restaurants serving rustic British food.

It seems even the Royals attend office Christmas parties - although it was a much more sophisticated affair, without all the usual drunken antics and revelry'.


Kate wore a blue and white floral dress with a smart matching jacket. I expect Kate quite possibly wore her Emilio Pucci or Smythe navy blazer for the luncheon.


When I heard Kate's dress was a blue and white floral print, I immediately thought of the chiffon Erdem Kate wore for the Eden Hall reception in Singapore. Kate's dress is a modified piece from the Spring/Summer 2012 Collection and seems the most likely choice from her wardrobe because the silhouette of the dress would accommodate a small bump unlike other items in Kate's wardrobe which are very fitted. It is also entirely possible Kate opted to wear a piece we haven't seen before. 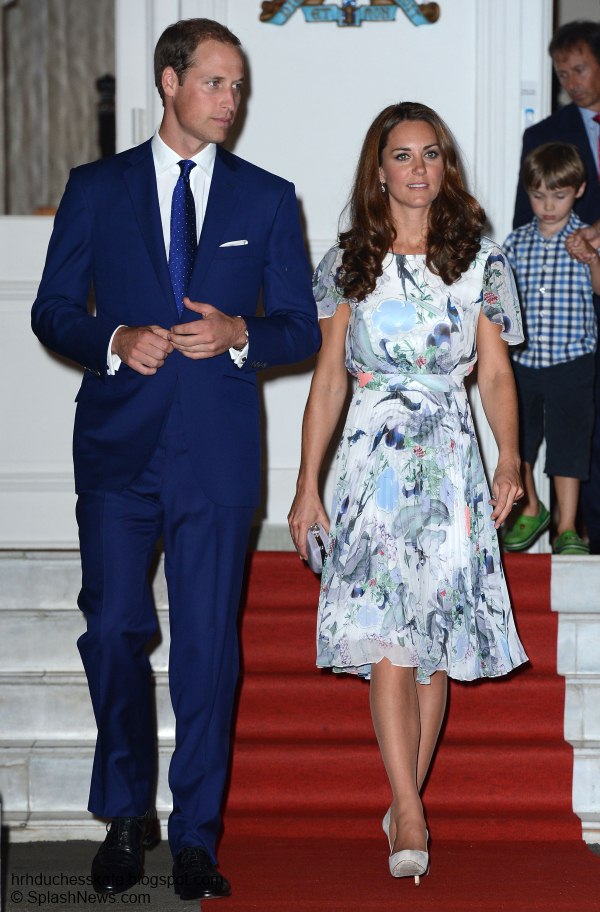 It is wonderful Kate is feeling well again and enjoying the festivities.

Hamleys toy store have created wonderful Lego imitations of Kate, William, Harry and Charles. No doubt many of you will be spending plenty of time in toy stores this week, though I'm sure it's unlikely any of you will be taking these home with you for the kids :)