A wonderful and unexpected surprise for Kate fans tonight! The Duchess of Cambridge attended the BBC Sports Personality of the Year Awards.


It had been thought Kate would be kept out of the public eye until Christmas Day at Sandringham, at the earliest, following her hospitalisation at King Edward VII hospital where she was treated for hyperemesis gravidarum, a condition which can leave leave expectant mothers dehydrated. Kate was discharged on December 6 and ordered to rest at home by her doctors.

Unfortunately, hyperemesis gravidarum is not a condition that disappears overnight, therefore the Duchess could only attend 45 minutes of the two and a half hour show. I think it shows a great deal of dedication on Kate's behalf that she came out to honour Britain's sporting heroes despite being so unwell.


As you will all recall, William, Kate and Harry were official ambassadors of the London 2012 games and with William currently working as an RAF Search and Rescue pilot in Anglesey, and Harry on a tour of duty in Afghanistan, Kate was eager to represent the royal family and show her support for UK sportsmen and women.


William and Kate attended numerous events throughout the games and shared a tender moment whilst watching the cycling in the Velodrome on Day 6 :)

The BBC Sports Personality of the Year Awards (also known as SPOTY) takes place annually in December and with an endless list of sporting achievements at London 2012 this year's ceremony is particularly special. A crowd of 15,000 at the ExCeL made it the biggest show in the events 59 year history.

Kate and David Beckham presented the Lifetime Achievement award to Lord Sebastian Coe, one of Britain's most famous Olympian's. He won gold in the 1500 metres in 1980 and 1984. Most recently he headed the successful London bid to host the 2012 summer Olympics, and later became chairman of the organising committee of the games. Lord Coe was not aware Kate would be presenting his award until much later in the evening and was no doubt delighted when he found out. 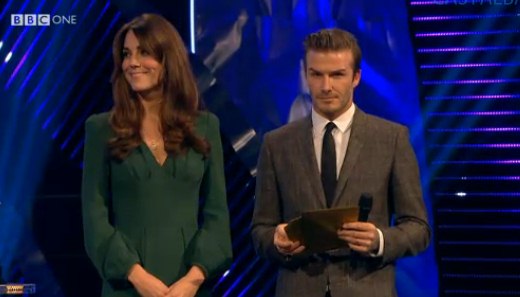 Bradley Wiggins was voted the BBC's Sports Personality of the Year 2012! 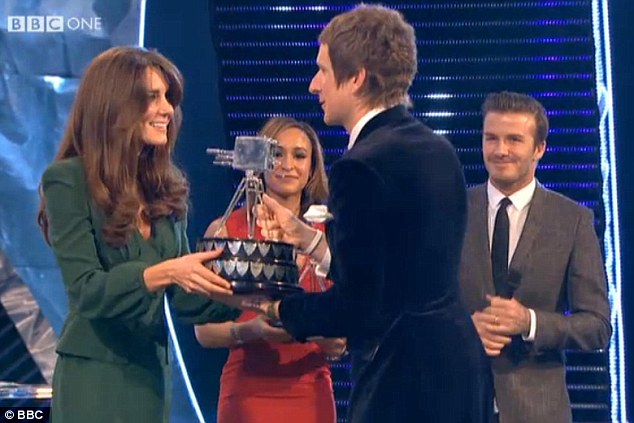 Kate looked beautiful in the emerald green Alexander McQueen Bell-Sleeve Floor Length Green. The £2,520 gown is 100% silk and features a deep v-neck, trompe l'oeil belt waistband and sweeping central thigh-high slit. A stunning choice. Kate looked amazing and after being so unwell for the past couple of weeks I love that she came out smiling in such a showstopping number.

From the Net-A-Porter product description:

'Alexander McQueen's floor grazing silk-cady gown is a dramatic way to work this season's passion for peplums. A testament to the London based label's precision tailoring, the darted bust, balloon cuffs and structured shoulders all combine to create a stunning silhouette'.

The Duchess completed the look with her black suede Jimmy Choo Cosmic Pumps. They are available for €525.


You can watch a video from the event at the BBC. 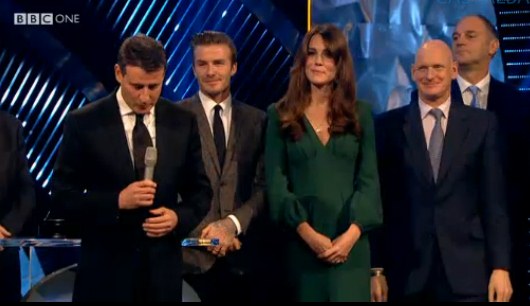 It was great to see the Duchess at the SPOTY awards tonight. I thought she looked radiant and following tonight's appearance I wouldn't rule out more short engagements similar to tonight's in the near future.

The Queen's staff Christmas party takes place tomorrow. Kate was expected to attend the event at Buckingham Palace. I imagine it will depend on how she's feeling.
Posted by Admin at 22:30:00