Duchess Kate attended a Buckingham Palace reception for foreign heads of state and government hosted by the Queen.


Almost the entire royal family including the Queen and Prince Philip were there to greet the guests.


A view of the grand entrance at palace.


Ninety five heads of delegation were in attendance including Prime Minister David Cameron and First Lady Michelle Obama as head of the US delegation. This is the second time Kate has met the first Lady. The Cambridges welcomed the Obamas at Buckingham Palace in May 2011 after returning from their honeymoon.


The Queen wore a very similar colour to Kate. Perhaps they coordinated?


Prince Albert of Monaco and his wife Princess Charlene arriving at the reception. Charlene is wearing a beige trouser suit. What do you think of her style?


Other notable guests included the Crown Prince and Princess of Norway who arrived in their national Olympic uniform. Queen Margarethe of Denmark and the Grand Duke of Luxembourg. Presidents from Germany, Finland, Serbia, fiji, Brazil and Cyprus were also at the reception.


You can watch a video at ITN Source. 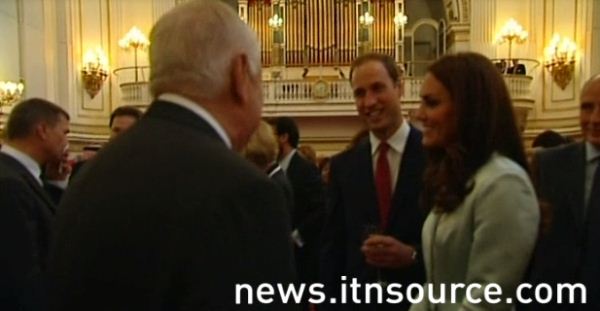 Kate wore a pale blue coatdress by cutting edge Scottish designer Christopher Kane. It's wonderful to see Kate supporting British fashion and trying something new. The beleted coatdress is thought to be a bespoke piece.


This jacket is a somewhat similar piece. The green and silk brocade currently retails for €2,280 (There is a 50% reduction on it here) The jacket features transparent silk lining, two breast darts, hook fastening, cutout sleeves and a back split.


Thirty year old Kane established his namesake label in 2006 with his sister, Tammy Kane assisting in his fabric creation and design process. He was awarded the 'New British Designer of the Year' title the same year. Speaking to LFW he described his signatures and ideal client


'I love detail, especially some sort of embellishment that can transform a garment instantly. My ideal client is a real individual and keen follower of fashion. Age doesn't really concern me; I'm more interested in personality and the way a woman carries herself'.


Kate carried her grey suede Alexander McQueen clutch. Kate's gorgeous blue topaz and diamond earrings are by Kiki McDonough and are not available to buy (With many thanks to Anna from My Small Obsessions) 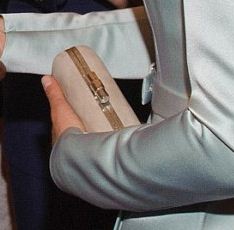 Dozens of coaches arrived at Buckingham Palace to take guests to the Olympic ceremony which begins at 9 p.m. Royal aides said Kate won't have time to change but they can't be sure. I'll be back with another post when the ceremony begins :)