The Jubilee Bank Holiday Weekend officially kicked off with a wonderful display of pomp and pageantry at the Thames Diamond Jubilee Pageant. Over one thousand boats mustered on the River Thames from the UK, the Commonwealth and around the world. The flotilla reportedly measured seven and a half miles from end to end is the largest fleet of ships to be assembled on the Thames in 350 years. The event has been two years in the planning and cost £10 million.

Kate was heard describing the event as 'so exciting'. Crowds lined fourteen miles to catch a glimpse of the royals, reportedly more than the royal wedding. No doubt an unforgettable experience for Kate.

The Duke and Duchess of Cambridge joined Prince Harry, Prince Charles, the Duchess of Cornwall, Prince Philip and The Queen on board a tender that once belonged to the Royal Yacht Britannia, The Royal Barge, called the Spirit of Chartwell. The vessel was donated for use at the event by owner Philip Morrell. 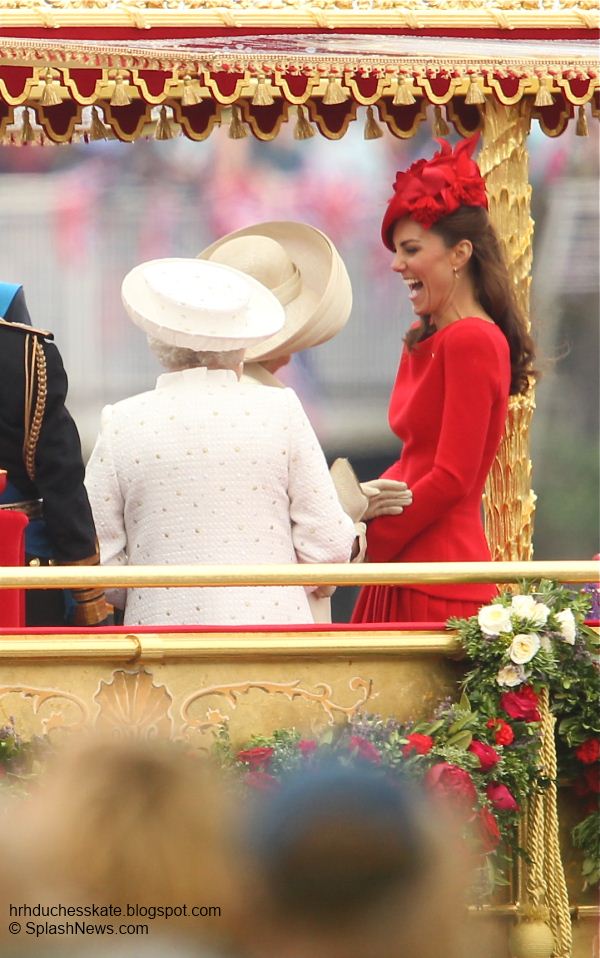 A closer look at the Spirit of Chartwell.


From the Daily Mail

'The boat has been described as a vessel 'fit for a Queen' and has been decorated with nearly 10,000 flowers. It has been transformed in a project led by award winning production designer, Joseph Bennett. Lavishly decorated with replica carvings and sporting a majestic red, gold and purple colour scheme, the vessel's design will echo the richly decorated royal barges of the 17th and 18th centuries. A lavish red, velvet banner decorated with a version of the royal coat of arms made from more than half a million gold coloured buttons hands from the stern'.

It has been widely suggested the Monarchy needs to scale down in order to survive and the seven royals sailing on The Spirit of Chartwell represent the core members, present and future of the British Monarchy.


All senior members of the Royal family are taking part in the event, except the reclusive Duchess of Kent. It is one of the rare occasions the entire family are together.


A look at a map from the event.

The jubilee has brought a sense of national unity, thousands of street parties are taking place all over Britain. Today the Big Jubilee Lunch was held. The aim of the lunch is to get as many people as possible to have lunch with their neighbours enhancing their sense of community and friendship. People from all 54 countries in the commonwealth were encouraged to celebrate with a jubilee lunch. 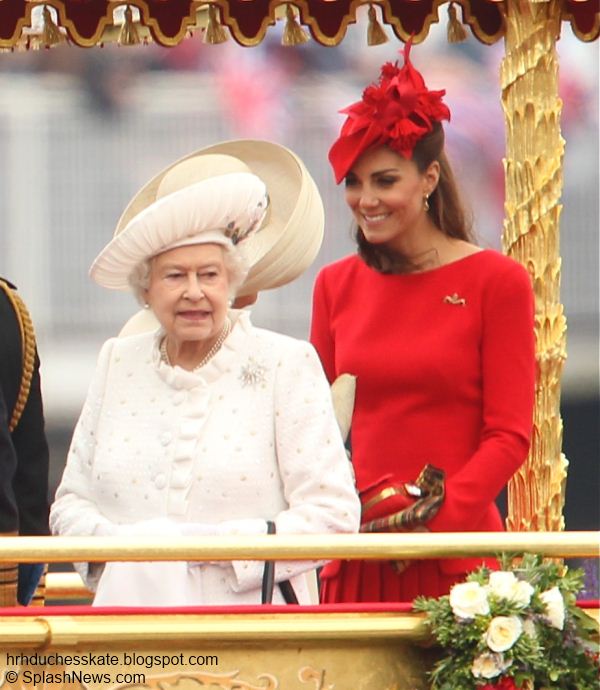 A look at the pageant. 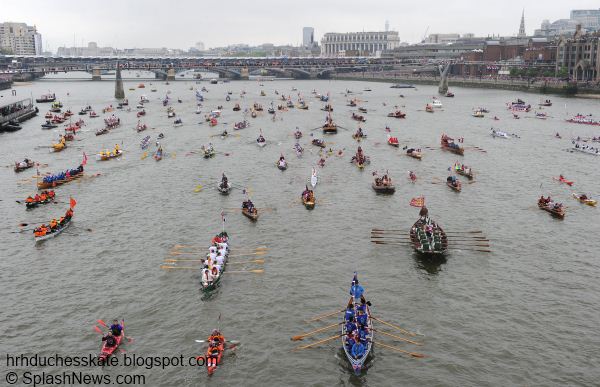 Kate looked lovely in a red Alexander McQueen pleated skirt dress. The cutout peplum showcases the A line skirt. The piece is from last years Pre-Fall collection. The dress was available for $2,045. Kate's dress is a custom made piece, lengthened with long sleeves. It is described as


'Rule, Britannia! Regimental uniforms, especially the British Order of the Garter, inspired Sarah Burton's Alexander McQueen Pre-Fall 2011 collection. Rendered in a vivid red, the exuberantly precise result is sure to delight both new and veteran fans of this British power house'.

I'm delighted Kate chose red for today, not only is it a fabulous colour on her but a nod to the jubilee. It is noticeably similar to the pink Emilia Wickstead dress the Duchess wore to the Sovereign's Luncheon and most recently the Buckingham Palace garden party. The dress has been worn by a number of celebrities including Kim Kardashian (Yes, I never thought we would see Kate wearing the same dress as KK but Kate's is quite different :)) and X Factor judge Tulisa. (With many thanks to Kate Middleton Style)


Kate wore her favourite LK Bennett Sledge shoes. They are currently available for £185.

Kate's brooch features two dolphins. It was a gift from the Royal Navy Submarine Service. Prince William is Chief of the RN Submarine Service hence the gift to Kate. (With thanks to @RoyalReporter)


Kate accessorised with her Kiki McDonough Citrine Drop Earrings. They are available for £495.

Kate carried a tartan scarf made of newly created Strathearn tartan, a nod to her Scottish title 'Countess of Strathearn'. She briefly wore it before she disembarked from the barge. 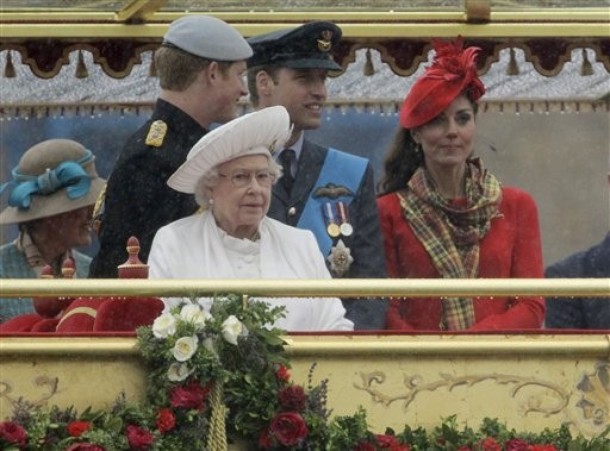 It was no doubt a memorable occasion for the Middleton family who sailed on the Elizabethan. Pippa looked absolutely lovely in an Orla Kiely ensemble. Pippa was obviously conscious of looking conservative and not detracting attention from the event with her sartorial choices and she did a wonderful job. Carole Middleton looked sophisticated in a cream dress and jacket. Mike and James opted for classic suits, the family appeared to be in very high spirits throughout the pageant, wonderful to see HM including them.


The Princes looked very dashing today. Prince William wore his Flight Lieutenant No 1 dress uniform while Prince Harry, a captain in the British army wore the No 1 ceremonial dress of the Blues and Royals and Army Air corps blue beret.


The Queen's outfit was designed by Angela Kelly. The ivory dress and coat decorated with crystals was a year in the planning, perfect for the occasion.

You can watch a video from The Telegraph and The BBC. 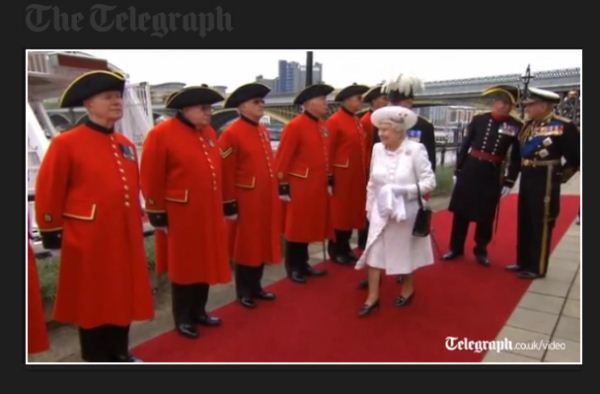 It was a simply spectacular day, despite the dismal weather the mood in London and indeed around the world was one of joy and celebration. We are unlikely to see an event like this again for a long time. A wonderful way to celebrate Her Majesty's Diamond Jubilee.