The royals began the final day of the Jubilee celebrations by attending a thanksgiving service at St Paul's Cathedral for the Queen this morning. Upon arrival the couple were greeted by hundreds of well wishers outside the cathedral. 2,000 people from St. Paul's congregation also attended the service. 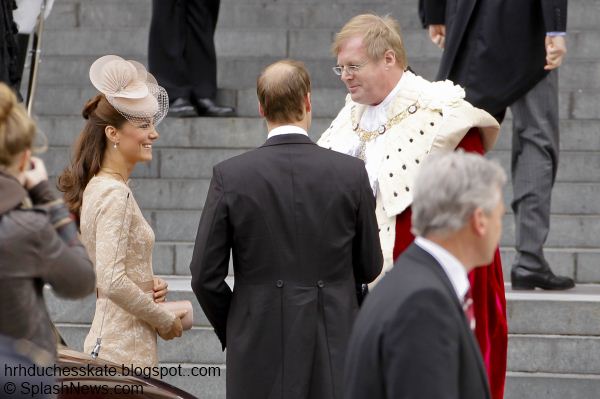 The service was a religious acknowledgement of of the life and reign of Her Majesty who is head of the Church of England.


The Archbishop of Canterbury, Dr Rowan Williams gave a sermon to mark the Queen's jubilee.

'I found in the Queen, someone who can be friendly, who can be informal, who can be extremely funny in private - and not everybody appreciates just how funny she can be - who is quite prepared to tease and be teased, and who, retaining her dignity always, doesn't stand on her dignity in a conversation'.

St Paul's Cathedral is an Anglican church. It has stood over London since 1677. The Church has three floors and is a well known tourist attraction for visitors to London, and of course a favourite of the royals.


A look at the Order of Service

The young royals looking very tired. One can only assume the after party at Buckingham Palace went on rather late last night :)


Kate and Harry exchanged smiles after the service. 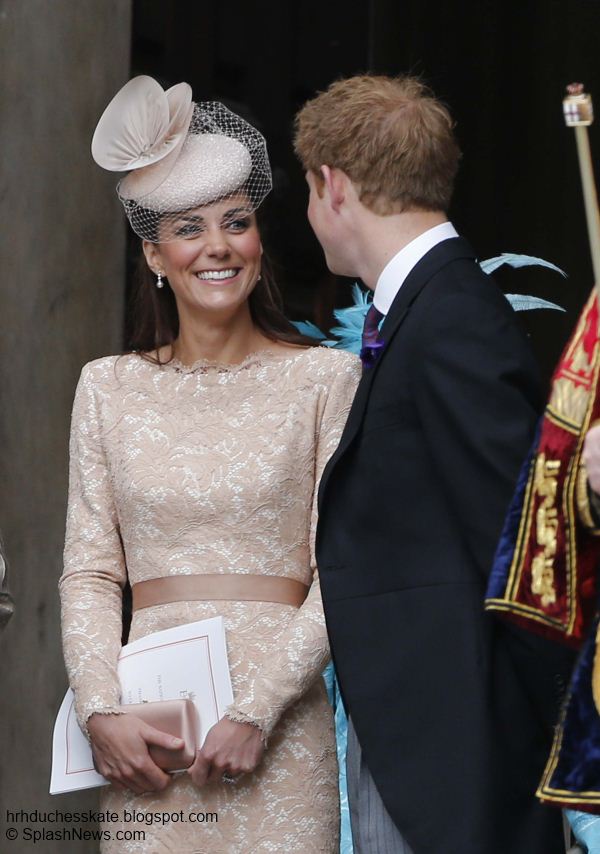 Kate looked lovely in a bespoke Alexander MvQueen blush overlay lace dress. Kate has chosen McQueen for all three days of the Jubilee weekend. The Duchess wore a red pleated dress to the Thames Pageant and a black McQueen jacket to yesterdays concert. Since Sarah Burton created Kate's wedding dress she appears to be Kate's 'go to' designer. The pair built a strong working relationship whilst planning the wedding dress. Another beautiful choice today. Again we see Kate favouring lace.


A look at the back of dress. The ribbon belt is a lovely touch. 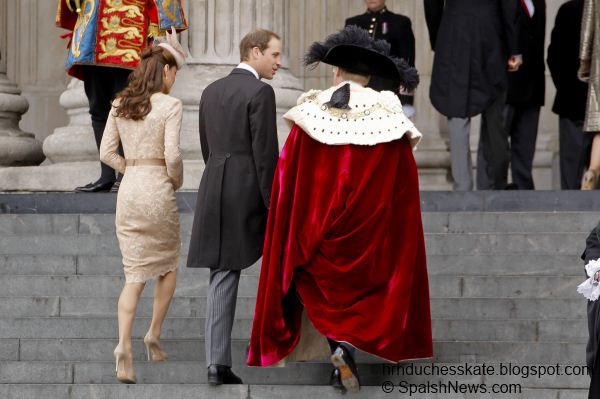 Kate wore the Nude Beaded Cocktail Hat by milliner Jane Taylor. The hat features a birdcage veil with a disc trim and cost £790.


The Duchess accessorised with her Prada Satin Logo Box Clutch.


After the service William, Kate and Harry attended a reception at the Guildhall.  Kate dined with Master Glovers and Pattenmakers, a body founded in the 17th century as a trade association. The menu included canapes with Sandringham Apple Juice, Fresh Herb Salad with Lemon Dressing, Marinated Uist Island Salmon with Lyme Bay Crab, Bread and Butter Pudding and Berry Compote with Sandringham Apple Sauce.


After lunch the Royals left Westminster Hall where her Majesty was joined by Prince Charles and the Duchess of Cornwall due to Prince Philip's absence in the 1902 State Landau carriage. William, Kate and Harry travelled behind them in a State landau carriage. They were joined by a Sovereign's Escort provided by the Household Cavalry Mounted Regiment. The King's Troop Royal Horse Artillery fired a sixty gun salute as the royals passed. 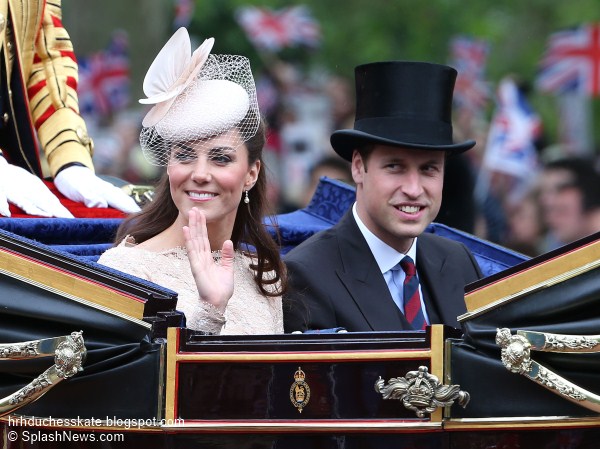 The carriages left New Palace Yard and passed Whitehall, Trafalgar Square. through Admiralty Arch and down the mall before entering Buckingham Palace. The mall was lined with 1,000 servicemen and women from the three services. You can watch a 3D video of the processional route here. 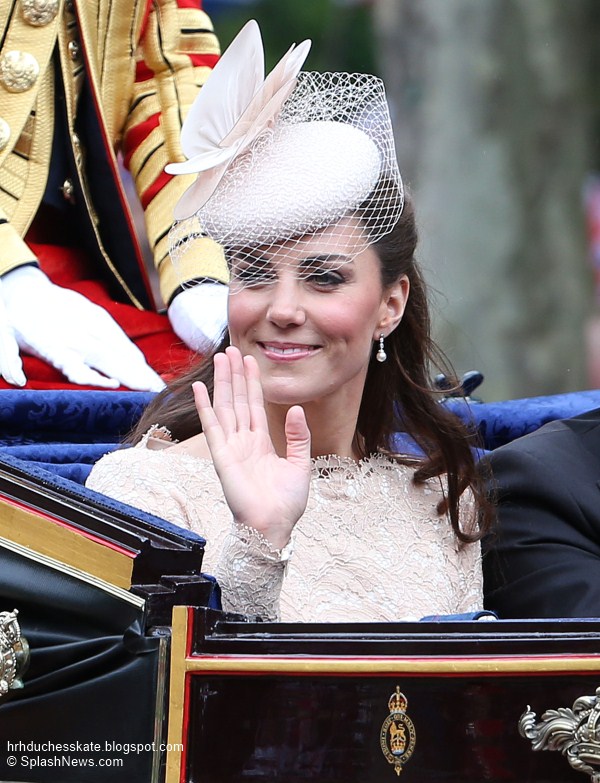 Footguards took their places on the Forecourt of Buckingham Palace awaiting the Queen's arrival from Westminster.


At 3.30 p.m. the Queen, Prince Charles and the Duchess of Cornwall, the Duke and Duchess of Cambridge and Prince Harry appeared on the balcony of Buckingham Palace. Unfortunately the rain began to fall as the royals came out but it certainly didn't damped the spirits of the estimated 1.5 million people who lined the mall. 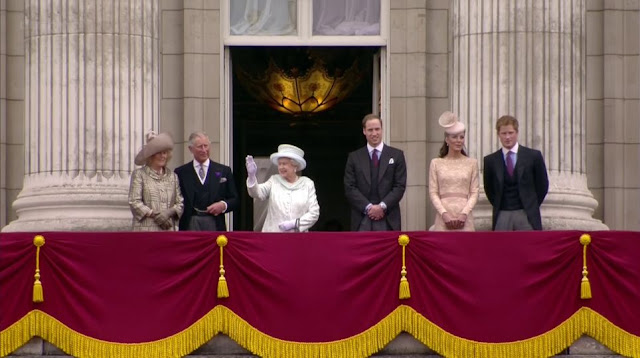 It must have been an amazing moment for Her Majesty, to witness the incredible turnout. It has been repeatedly said throughout the weekend how 'unifying' the jubilee has been. 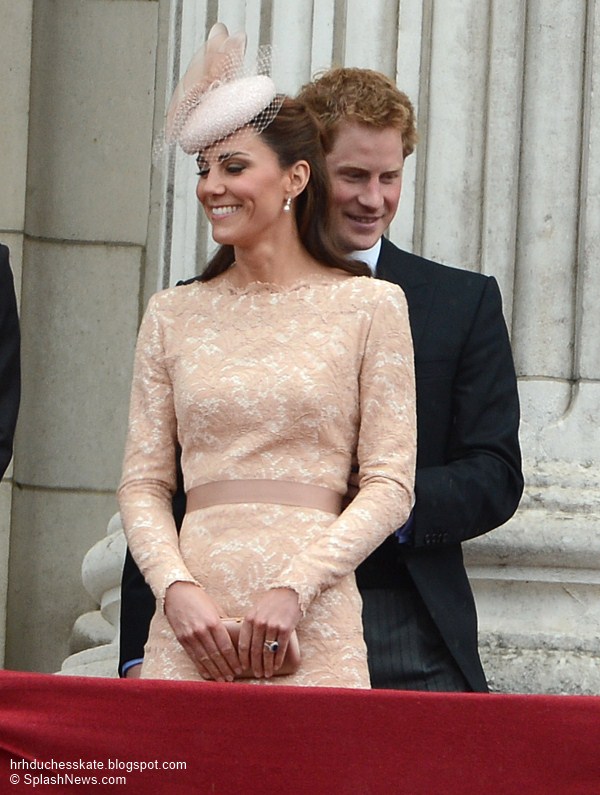 A look at what the royals saw from the balcony.

The RAF flypast marked the climax of the Diamond Jubilee Weekend, absolutely spectacular.

It has been an unforgettable weekend. We were given the opportunity to celebrate the Queen's reign (and see Kate three days in a row) HM  recorded a televised message. You can watch it on The Royal Channel.

I think this banner says it all :)